NBA free agency 2013: The Pistons as the funky new Grizzlies

A weird little team made up of defenders and a distinct lack of shooting prowess? Meet Detroit, a potential future Memphis.

Share All sharing options for: NBA free agency 2013: The Pistons as the funky new Grizzlies

Like everyone else on the planet, I was initially skeptical of the Detroit Pistons' decision to use a big ol' chunk of cap space on Josh Smith. To some extent, I still am skeptical. The reason: as Mike Prada detailed, Smith is a poor shooter who now joins a team full of bad shooters. Someone has to shoot! It will probably often be Smith. That's bad.

... for an offense. But Smith is an excellent defender when engaged (and sometimes even when he's not engaged, a sign of true talent), and Detroit has a couple of other solid and/or promising defenders. And we have an excellent example of a team that can't shoot but has some excellent, solid and/or promising defenders: the Memphis Grizzlies. The Memphis Grizzlies who made it to the conference finals in a stacked West last year. 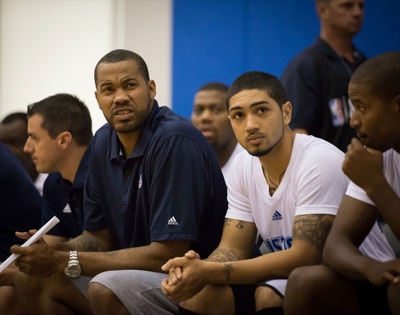 The Grizzlies' style and substance over the past few seasons has been totally out of step with the rest of the NBA, but it has worked. A comparison with the younger Pistons isn't exact, but the end result looks pretty close. You have a skilled big man on each squad (Marc Gasol, Greg Monroe) who can move the ball, play in the pivot, step away and nail a jumper and play the pick-and-roll. (Gasol is 20 times better than Monroe on defense, though. But Monroe has an alter ego named Andre Drummond who projects highly on that end.) In Smith and Zach Randolph, you have inefficient volume scorers who shoot a little too much and scowl with some frequency but get the job done regularly. (Smith is a much better defender and passer than Z-Bo. Randolph's a better rebounder. And if you drop the scowls, defense and rebounding and add a few million dollars per year, you have Rudy Gay.) In the backcourt, you have a particular lack of shooting prowess, though Brandon Knight is better from long range (37 percent) than you think.

And that's where this all leads: Detroit can be really good if Drummond is not a mirage, if Monroe can round out his game as a defender and if Knight can follow Mike Conley's path from near-bust to near-All-Star predicated predominantly on smart, restrained offensive play and good defense. Conley struggled his first three seasons, but improved a lot in Year 4. Like Knight, he entered the league at quite a young age, and arrived on an awful team with little direction. In Detroit, the direction is beginning to take shape. Let's hope that Smith's arrival, a new coach in Maurice Cheeks (who is even comparable to Lionel Hollins in style, strengths and weaknesses) and more seasoning helps Knight reach toward his potential.

If he does, and if Drummond and Monroe continue to develop, the Pistons could be our next Grizzlies: a weird little high-defense, low-shooting competitive team bucking the league's trends.