Two years ago, we embarked on a foolish endeavor to rank the top 99 NBA players four years in the future. Turns out the endeavor was ... foolish.

Share All sharing options for: Revisiting the top 99 NBA players of 2015

In 2011, Mike Prada, Andrew Sharp (now of Grantland) and I endeavored to rank who we thought would be the top 99 NBA players in the year 2015. We're still two years away from that magical round number, but one word can describe the bulk of the exercise: welp. (Which is why we're doing it again later Monday. Hope you enjoy!)

Here's that 2011 exercise in all its glory, with our explanations, commentary and ridicule.

Below I will assess the likelihood of each pick actually hitting their projected mark in 2015. Keep in mind that 99 players makes up about 20 percent of the league. Basically, the No. 99 player is expected to be the 30th best third-banana in the league.

With no further adieu ...

98. Evan Turner. This is not totally out of the realm of possibility. It's unlikely, perhaps, but Turner's not ... well, Anthony Randolph.

97. Tony Wroten. One assumes Wroten will actually get off of the bench between now and 2015. But even then ... no, he's not going to be in the top 100 of that year. And let the first lesson of this exercise be written: picking high school kids to be top NBA players four years out is a dangerous game.

96. Omer Asik. This is totally plausible ... if Houston trades him from behind Dwight Howard, which seems like a sure thing despite the Rockets' protestations.

95. Quincy Miller. The Wroten Rule strikes again. Miller, highly ranked out of high school and AAU, slipped into the second round in 2012 and played all of ... 26 minutes in 2012-13. He didn't even have great numbers in the D-League!

93. Rodrigue Beaubois. Oh God, I picked Roddy B higher than Hickson. Can we stop this exercise now? I don't think I can take another 92 picks ...

92. James McAdoo. In fairness to Prada, who made this choice, McAdoo will likely be in the NBA by the time 2015 rolls around. Probably. Maybe. (Also: Wroten Rule.)

91. Steve Nash. Sharp took Nash, we all chortled and ... yep, Nash will almost assuredly have retired or retire in the 2015 offseason. Never ever leave Phoenix, old players.

90. Devin Harris. In the blurb for this one, I wrote: "He should remain an above-average starting point guard going forward." Oooooof. Let's dub this realization -- that shaky veterans like won't regain their status very late in their 20's or into their 30's -- the Harris Rule.

89. Tristan Thompson. Reasonable choice by Prada of a guy who at that point hadn't played an NBA minute. It works (sometimes)!

88. Al-Farouq Aminu. This is currently in contention with Nash as Sharp's worst pick. And remember, he picked Wroten.

87. David Lee. Hey, nice pick ... Ziller! Lee was an All-Star in 2013, and in two years will likely still be one of the top three or four players for a likely contender (Curry willing).

84. Tyson Chandler. Welp, here's to hoping Chandler has another one of his signature "crawl out of the injury tomb" comebacks left in him!

81. Shabazz Muhammad. Nope, this was my pick. I'm going to be sick. But at least I didn't have this line, attributed to Sharp: "I feel like we should've picked him 40 spots higher, but none of us had the guts."

78. Brandon Roy. So here's our first player who definitely will not be in the league in 2015, let alone among the best 99 players in the league. I am so sorry for believing in your healing ability, B-Roy.

77. Kyle Lowry. With Lowry, who knows? He'll be better than Brandon Roy, I estimate.

74. Bismack Biyombo. Two years in, I still don't think anyone has any realistic expectations on what Biyombo will become.

73. DeMar DeRozan. I wrote in response to Sharp's DeRozan pick that we'd know a year later (so, 2012) whether he'll become a star or not. We're still not, but with every year it looks less likely. But you don't need to be a star to be the No. 73 player in the league, so it's still plausible.

70. Wesley Matthews. Not totally likely, but not unreasonable.

68. Thaddeus Young. Yes! Did we get all of our worst picks out of the way?

George working on being 'No. 1 guy' 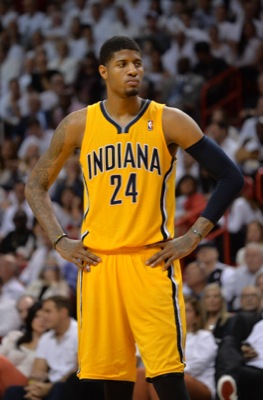 65. Paul George. And our first player who is clearly way, way, way too low. Prada picked him up, and I expressed skepticism. Yikes.

62. Paul Pierce. I mean, stranger things have happened ... he'll only be ... 37 years old. Does Mikhail Prokhorov have access to an anti-aging facility?

61. Klay Thompson. Prada and I killed this Sharp pick when he made it. Who's laughing now? (So glad I didn't pick Jimmer.)

55. Brandon Knight. Sharp: "Brandon Knight will be really good, and along with Greg Monroe, he'll bring the Pistons back from the dead over the next few years." Aww.

51. Andrew Bogut. Ziller's momentum slain by another No. 1 pick.

46. Danny Granger. Another injury casualty. In fairness to the Basketball Gods, injuries have been responsible for fewer mistakes in this exercise than sheer foolishness.

44. Michael Gilchrist. That's right: Prada picked him before he changed his name to Michael Kidd-Gilchrist. And ... you know, it's possible! If Charlotte can scrub off the stink we might be able to see what kind of defender MKG is in the next two years.

43. Serge Ibaka. Another great pick. Things are getting better the closer we get to the top ...

38. James Harden. We let Harden fall way, way too low. Prada grabbed him here. Who on Earth could we have taken above him?

35. Derrick Favors. Looking iffy, but not totally outside the realm of possibility.

34. Amar'e Stoudemire. Oh. Oh no. While you could chalk this up to injury, I did write this in response to Sharp's pick: "No, this is a good pick. Explosive big men with one leg and limited contributions outside of scoring are usually awesome when they are 33 years old. Solid choice, Sharpie." 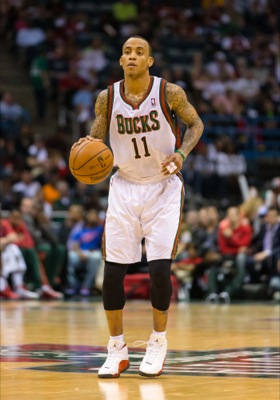 Ellis is hoping for a fresh start in Dallas.

27. Stephen Curry. And now the first player above James Harden who has a shot at being better than Harden in 2015.

And now, the top 20. Things are getting real.

20. Anthony Davis. A clever pick from Prada. Possibly too high, but maybe not.

19. Rudy Gay. There is no chance that Rudy Gay is among the 20 best players in the NBA in 2015 unless that vision correction surgery was done in Germany with a side of vampire blood transfusion a la Kobe.

18. Tyreke Evans. I'm not proud of my actions in taking Tyreke Evans in the top 20 of 2015 back in 2011, OK? I acknowledge those actions, I take responsibility for them and I ... just you wait, world. It's going to happen for Tyreke. It's all going to happen. I regret nothing!

17. Rajon Rondo. This was a great pick by Prada.

16. Carmelo Anthony. A strong pick by Sharp. (I cringe at my retort, which claims Melo should be in the 40s. Ugh.)

15. Dwyane Wade. Yes, I picked a lot of the older guys. And yes, this is totally happening. Wade was impeccable until his knee injury this season, and it's not considered to be serious. He'll still be excellent in 2015.

Two comments. The first from Sharp when Prada made this pick back in 2011: "Even Doc Rivers is like, 'Whoa hey there Mike, are you f***ing kidding me?'"

The second, from the GIF ORACLE:

11. John Wall. Not the most unreasonable pick by Prada in the top 15.

10. DeMarcus Cousins. Let the record show that I did not pick Cousins: Sharp did. And I called it the most insane pick of the project. So there you go.

8. LaMarcus Aldridge. I'm going to abstain from this argument because Portland already dislikes me.

5. Derrick Rose. Spot on, if he recovers.

4. Blake Griffin. It remains to be seen whether this is a bit too high, but it won't be more than that.

3. Dwight Howard. Back surgery is a helluva damper, innit?

Thus ends our 2013 review of what three guys in 2011 thought the league would look like in 2015. Hope you enjoyed, and stay tuned for a very special project from the SB Nation NBA crew.

• Rockets to use Dwight at PF, Asik at C?