Allen Iverson retired today, but -- for better and worse -- he has felt pretty fully gone for some time.

Share All sharing options for: The unanswerable Allen Iverson

Editor's Note: This piece was published when Allen Iverson retired and is being re-shared on March 1, the day his jersey will be retired in Philadelphia.

Sometime fairly soon, the Philadelphia 76ers will retire Allen Iverson's number three, and he will show up for the ceremony and wave and smile and have the strange experience of watching and smiling through his own ascent into liminal, local immortality. His jersey, or some oversized replica of it -- big enough to be seen from far below -- will be hoisted up out of Iverson's reach and then all the way up to some very commanding heights, where it inarguably belongs.

The sound and fury of AI's prime

Beyond the iffy shot selection and the cultural implications of becoming the NBA's resident superstar anarchist, Allen Iverson made the damn building shake.

The sound and fury of AI's prime

This will happen because Iverson deserves the honor. He deserves it for being the premier scorer of his era and for being a brash, loudly eloquent all-over-print -- ink and bruise and scar, the whole hard story of his short life written on his body -- personification of a very specific type of struggle. That Iverson has finally retired from basketball -- three seasons and change and seemingly millions of miles from his last NBA game -- suggests that he's finally ready to watch his jersey and the myth that filled it make their way up into thinner air, from his spot down here with everyone.

This is by no means something he had seemed ready for, even last year. It makes a certain amount of sense that Iverson never seemed quite comfortable with or reconciled to or even fully cognizant of his career's end. It takes a certain sort of monomania to become Allen Iverson, and we can only assume that being Allen Iverson in turn feeds other, stranger distortions. To do what Allen Iverson did over his 14 seasons -- which is be smaller than almost every opponent on the floor and quantum levels of existence more accomplished than any of his teammates, and then furiously dismantle those opponents and warp the games with the force of his will -- required a wild sort of want.

The generous blessings he had in terms of talent for the game were one considerable thing; how jealously and ferociously he leveraged and finally burned through them in pursuit of everything else was what made him both difficult and great. It was also -- and we're guessing, here, because we can only really guess at The Answer -- part of what made it so tough for him to see the end when it arrived, and to stop.

Or, even, to have a different and more sensible-seeming end to his career. Iverson almost certainly could have had a longer career and made another massive fortune and perhaps won a championship or three had he been willing to become a role-knowing rotation player and specialist, but he didn't want it. He could have made a smaller but still mind-boggling fortune being a diminished version of his old self overseas for some years, carving up the Turkish or Italian leagues or slogging expressionless through weeks of 40-point games in the smoggy illogic of the Chinese Basketball Association. But, a few feints notwithstanding, Iverson never really gave that much of a shot, either.

Instead, he just hung around the game without ever quite being anywhere near a return, muttering about a comeback and otherwise suffering the usual thousand undignified cuts that await the young and beautiful and improvident at the end of their youth. He burned through a lot of money. He gave emotional interviews in which he described his life as a wreck. He did not seem happy, or satisfied, although of course he never really did. Bomani Jones wrote beautifully and sadly about this at SB Nation last year.

Allen Iverson will, in an important way, never leave basketball, or the NBA.

So what was left, for Iverson, was to leave. But while there's a heavy and sad finality -- even after those three years of distance -- to Iverson's retirement, this isn't death we're talking about. Iverson will get some job with the Sixers, hopefully, and grow old in the game; we might as well wish him some happiness and peace, because why would we wish anything else for anyone. But, more to the point, Allen Iverson will, in an important way, never leave basketball, or the NBA.

It's true, and not necessarily a bad thing, that Iverson's specific sort of struggle feels like an anachronism in the NBA circa now. The NBA, awash in record revenues and rising ratings, is no doubt happy about this. It's the consensus that Iverson's years as the NBA's most recognizable -- if never necessarily best-loved -- figure were not good ones for the league, and in terms of the demarcations of brand health they weren't. But this is not because of any failing on Iverson's part, or even on the NBA's, so much as it's a reflection of how difficult and complicated and not-for-everyone Allen Iverson was as a player.

Because his mastery was so furious and improbable and risky -- all that hungry pinballing and crashing through the lane, through opponents, into various immovable objects real and metaphorical -- Iverson was both frightening and exhilarating to watch. This wasn't the zipless, vicious grace of Michael Jordan or even Kobe's fuming, self-conscious maestro-hood. Iverson was harder than that, more challenging than that -- he was in control, but his game was about finding the outer boundary of that control, a place in the red where opponents couldn't meet him, and then staying there. There was a sharp and unmissable risk in his every on-court moment. Someone or something could get hurt. It was usually him. This was fun to watch, but it was decidedly adult entertainment. 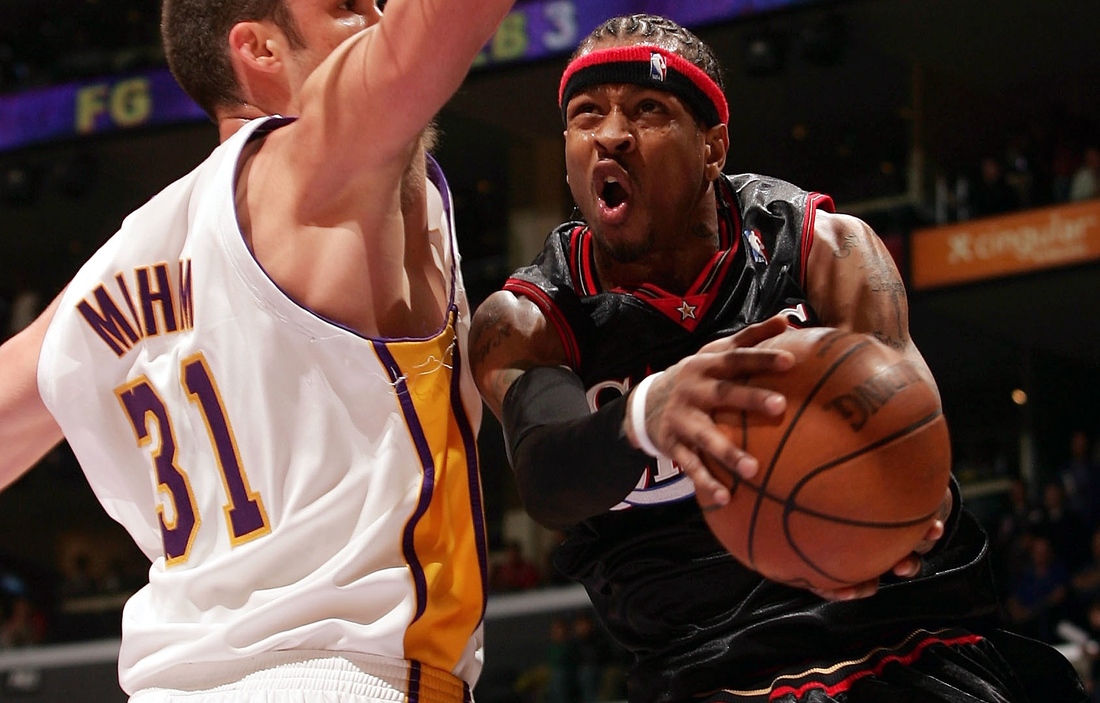 Iverson famously recorded a rap album that the NBA's brandroids -- aghast and fighting the future as ever in the post-Jordan years -- forbade him to release. It was of a style that doesn't really exist anymore -- gloomy, chilly, multiply paranoid, East Coast hip-hop of the Mobb Deep school. There is still violent hip-hop, of course, and the East Coast still sounds like something; the old ominous, haunted stuff just hopped on I-95 and got off around Atlanta at a different BPM, with different slang.

Nothing about the NBA really sounds or feels like Allen Iverson anymore.

But there's an abstraction to today's dominant rap mode that's very much of our time, which is a very different one than Iverson's. The next generation of great NBA players are on a lighter, less consequential vibration -- the coastless, airless, grandiose self-iness of Drake, oscillating between smug hedonism and glum moping in some frosty VIP room behind the VIP room that's behind the first VIP room. There's struggle in it, because of course there is, but it's a posh and abstracted struggle that couldn't be more alien to Iverson's. Nothing about the NBA really sounds or feels like Allen Iverson anymore.

But, just last year, the Memphis rapper Don Trip released a great and fascinating song called "Allen Iverson." This was during a period in which seemingly every rapper was releasing songs with athletes' names as the title -- Action Bronson alone has covered half the WWE jobbers of the 1980s all by himself -- but the song was different. The choruses were different longish samples from Iverson's reliably emotional and anguished engagements with the press; the last one was the one we all know best, and the last word of the song is Iverson's umpteenth exasperated recitation of the word "practice."

Before it gets there, though, the song is fascinating. Trip raps the whole thing in the second person, either about himself or about Iverson -- the unease in the song could belong to either, or both. But if it's unclear who the song belongs to, it's quite clear what it's about. It's about having and wanting, and fighting and falling short, and feeling as if something is unfinished. It's grandiose, too, and spiky and more than a little pissed off and not really lovable or looking to be loved. If it's about Allen Iverson, it's not just about Allen Iverson. But what made Allen Iverson the most fascinating and electrifying player of his era -- what made him immortal long before he wearily agreed to it, and what made some of us love him despite so much -- was never just about Allen Iverson, either. So it works.