The folly of pearl-clutching over NBA drug use

The Hook considers the latest report on rampant drug use in the NBA. Plus, a meditation on Dante Exum's future.

Share All sharing options for: The folly of pearl-clutching over NBA drug use

NBA players are tested for drugs four times per season. There are formal penalties for positive tests. As I've recently noted, one of the brilliant things about the NBA's drug program is that those who test positive for marijuana are kept secret until their third offense -- then they get hit with the telltale five-game suspension.

Hard drugs are different: the punishment is swift. (Ask Chris Andersen.) And of course, there is PED testing and soon, HGH testing. This is all in place due to collective bargaining: the players and management agreed on these programs.

TMZ cites a number of anonymous sources it calls "famous and current NBA players" in a report saying that anywhere from 10 to 30 percent of current NBA players use drugs harder than weed. Stuff like Lean (a codeine-based liquid) and Molly (a purer form of ol' party drug ecstacy). How do they get away with it?

Because testing is randomized, the last test can be administered as early as January, and the season lasts for months thereafter. As one recently-retired NBA player put it, after the 4th test, "It's like Christmas Day. We can take whatever we want."

The implication is that once the fourth test is done, there are no ramifications for drug use among NBA players. Which is absurd. "It's like Christmas Day." Yes, that's why the season drags in March: all the players are rolling during shootaround. The drugs we're talking about are still illicit substances, and team management nor the league is going to be particularly sympathetic to users going hog wild once their four tests are done.

The other implication is that because players are legitimately worried about the tests, they don't use or use as much before that fourth test. Given that most players won't be clear of the lab coats until pretty late in the season, that would seem to undercut TMZ's point that drugs are a major problem.

Yes, drug abuse is bad. But we have little (if any) evidence that it's happening on any scale in the league.

The harder stuff is more problematic because of its chemically addictive properties and the mysterious but probably awful impacts of long-term abuse. But this report is all conjecture, and until players start getting nailed -- by the league or the cops -- worry over it seems unproductive. Yes, drug abuse is bad. But we have little (if any) evidence that it's happening on any scale in the league.

The wonderful irony in TMZ's report is that it came out right around the same time that new Hawks head coach Mike Budenholzer was arrested on suspicion of driving under the influence of alcohol. A week ago, a Bobcats assistant got hit with a resisting arrest charge. Maybe it's the not the players we should be worrying about.

As of now, Dante Exum will not play college ball in 2013-14. He's expected to be a very high pick in the 2014 NBA Draft -- DraftExpress currently rates him No. 3 on its mock, above Jabari Parker, Aaron Gordon and Marcus Smart. The Australian guard is just 18, so he could choose his draft year from this point forward. If he wants to play college ball eventually, he could do so in 2014-15 and be a likely top pick in the 2015 draft. But given how highly he's rated now, waiting would be simply delaying the payday.

How good can Exum be? 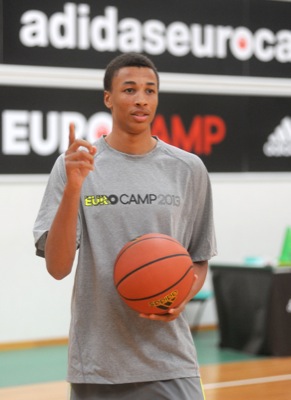 Where does the Australian phenom rank on SB Nation's Top 100 of 2017 list?

What if Exum sits out basketball entirely this season? He graduates high school in N.Z. in December, so he won't be playing past that. If he doesn't join a college for the spring semester, could he reasonably catch on with a European, Australian or, dare I say, D-League team? Is it even worth it, to show his talent and skills in organized, high(ish)-level competition?

NBA GMs have become accustomed to drafting players they can't watch play very highly. Kyrie Irving went No. 1 in 2011 on the strength of his high school/AAU work and a dozen college games. Nerlens Noel went No. 6 this June after missing half the season with a torn ACL. Anthony Bennett and Alex Len were a bit different -- they had plenty of college games in which to show off, but were injured and unavailable during workout season.

The thing is, for most players, the college season isn't going to end well. Only one team wins the national championship. There are typically bad games along the way -- in conference play, conference tournaments or the big dance. Some top prospects can't even get their teams that far because of a lack of surrounding talent or acumen. It doesn't impact every top player -- remember how Texas wasn't great under Kevin Durant, yet he remained above it all? -- but it's an interesting conceit. Not subjecting yourself to that can be better than playing and, at some point, failing.

I'm not sure being totally absent from the Wiggins-Parker-Randle college basketball cataclysm is a bad thing for Exum, as badly as I want to see him play.

• Caron Butler to the Bucks?

• What Andrea Bargnani brings to the Knicks

• The Hook: What Ricky Rubio ought to be