In explaining the Mavericks' sudden mediocrity cycle, Mark Cuban implied that perhaps too many teams are trying to rebuild from scratch. Is that making the full rebuild inefficient?

Mark Cuban made a lot of interesting points in his blog post explaining why the Mavericks have ended up in a cycle of mediocrity (my description, not his), as covered by Jonathan Tjarks. The saddest lines in the post are the ones in which Dwight Howard answers a question about his career objective by stating that he "wants to be epic" and Cuban argues that's the greatest opening answer by any NBA player ever. (Even Gordon Hayward is over there laughing with his Bluetooth headset and wireless X-Box controller.)

What intrigued me was Cuban's declaration that perhaps too many teams are trying to pull off the Presti Plan, making it a more difficult rebuild option.

What I do know, at least what I think i have learned from my experiences in business is that when there is a rush for everyone to do the same thing, it becomes more difficult to do . Not easier. Harder. It also means that as other teams follow their lead, it creates opportunities for those who have followed a different path.

This is a core economic tenet and, basically, the lesson of Moneyball: the market inefficiency is where others aren't. Several teams are working on a Presti Plan rebuild: trade veteran talent and cap space for draft picks, get really bad for a couple of years to pick high and then pounce as your first young star approaches his second contract. Cuban sees too many teams going this direction. In theory, that would make the common asset those teams are chasing -- the first-round draft pick -- rise in price. Price is relative and these teams are supplying veteran talent to the market at higher rates so that makes veteran talent cheap. And that's where Mark Cuban and the Mavericks have found the market inefficiency, the "opportunity" he mentions.

Monta Ellis for a defensible $25 million over three years isn't quite what we're talking about, though, because Monta Ellis brings his own set of issues. Vince Carter for $9 million over three years in 2011? That's a perfect example of a contract available primarily because a certain number of teams are focused on developing their younger players and, yes, sucking. Devin Harris at a minimum contract? I know he's been anonymous lately but ... really?

Where do Mavs picks go? 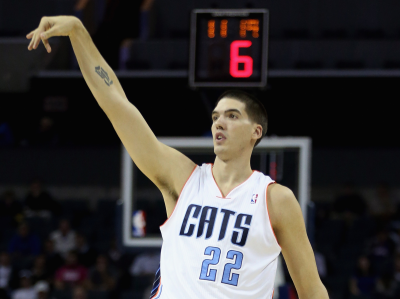 The Mavericks technically haven't kept their own first-round pick since 2006 (Maurice Ager). What the heck happened to all of those picks?

2007: Petteri Koponen, a Finn who is unlikely to ever play in the NBA, was the choice with the Mavs' No. 30 pick. Dallas had traded it away back in 2007 in the Erick Dampier blockbuster.

2008: The pick at No. 23 was Ryan Anderson. It had already been sent to New Jersey in the Jason Kidd deal at the '08 trade deadline.

2009: The Mavericks kind-of, sort-of kept their own pick in 2009. They traded Byron Mullens (their No. 24 pick) for Oklahoma City's No. 25 pick (Rodrigue Beaubois) and a future second. So Beaubois is basically a Mavericks' kept first-round pick, more or less.

2010: The No. 27 pick, Jordan Crawford, had been included in the Jason Kidd deal. He ended up in Atlanta.

2011: The Mavericks' No. 26, Jordan Hamilton, was included in a really complicated deal on draft day. Dallas gave up Hamilton and a late 2011 second (which became the infamous Tanguy Ngombo) for, basically, Rudy Fernandez. This is the best example of a pick-for-talent deal.

2012: The Mavericks traded No. 17 (Tyler Zeller) for No. 24 (Jared Cunningham, yikes!) and two seconds (Bernard James and Jae Crowder). This shows Dallas leveraging the high value of firsts to grab more assets.

2013: Alright, here we go. The Mavs traded No. 13 (Kelly Olynyk) for No. 16 (Lucas Noguiera) and two 2014 seconds. The Mavs then traded Noguiera, Cunningham and their own second for No. 18 (Shane Larkin). So they moved down five picks to net one second and lose Cunningham.

What will the wacky Mavericks do next?!

These deals aren't quite the same as what clubs like Miami seek. The Heat are looking for the best available players willing to show up for their limited contract slots. The Spurs have their own story because they actually had cap space this year, before forking it over to Tiago Splitter and Manu Ginobili.

But teams like the Hawks, Lakers and recently the Bucks have worked like the Mavericks have, trying to find cost-effective pieces to add. It all ends up working the same, though: these teams all want cheap veteran talent and the teams most likely to supply them are bad teams trying to get worse, or other competing teams who no longer decide the player's worth it. Ellis went from a playoff team to a team trying to get back into the playoffs. Harris' team was closer to the postseason than the Mavericks last season. Both the Bucks (Ellis) and Hawks (Harris) figure to be worse overall next season and Dallas benefits.

There are a lot of teams competing for a title next year, or at least ones clearly not trying to tank their draft position. The West is still deep -- you can only really count the Jazz, Kings and Suns out of playoff consideration -- and the East has about nine or 10 teams pushing for a playoff berth so the mass movement toward institutional tanking is overblown.

But here's the second piece of the equation Cuban is talking about with regard to the difficulty in following a Prestian-style rebuild: contending teams are putting a really high value on draft picks, too.

You rarely have teams selling their first-round picks for chump change at this point, even teams like Miami with packed rosters and luxury tax bills. The rookie scale contract is one of the most glorious things in the NBA for general managers. At worst, it's two years of minimal salary for a young player; at best, it's four years of dirt cheap production, followed by relative control over the player's second contract thanks to restricted free agency. A first-round pick is a huge asset for every team. So these days -- especially with the tougher luxury tax -- the value is sky high. The price of a pick is sky high.

Look at what Philadelphia paid for basically two picks, one which had manifested as Nerlens Noel, and the other of which will likely fall between No. 10 and No. 18 in 2014. For that, the Sixers paid a 23-year-old All-Star point guard on a reasonable multi-year contract. You pray you can draft a player who will be a 23-year-old All-Star. And the Sixers, because of that team's plan to improve, decided to go with the prayers rather than the proven entity. (There's also an issue of Holiday perhaps not being as good as he seems, but that's another discussion entirely.) There's no better example of how high the price of draft picks has gotten than the Sixers' draft day shenanigans.

This year, the Mavericks ended up packaging their pick (Kelly Olynyk), Jared Cunningham and their second-round pick (Mike Muscala) for a later first-round pick (Shane Larkin), cash and two future seconds. So it basically moved down to grab cash, an extra second and to lose Cunningham in the team's quixotic bid for cap space to sign Dwight Howard. That's, honestly, not great value. Neither were trades sending out Tyler Zeller and Jordan Hamilton the two previous years.

That's what will be interesting to see going forward: which team will make killer deals in sending out their picks. Will it be the Pelicans, who lost Noel and a 2014 first for Holiday? Will that start a trend in the other direction, where teams regularly use their annual draft picks to pick up talent? The NBA is a relatively free market, all told, and the supply, demand and price should get back toward stable when picks are properly valued. Are we there yet? If not, how long do teams like the Mavericks have to take advantage?

It's certainly an interesting subplot to the discussion of tanking.

• Getting to know Luigi Datome, Vitor Faverani and Gal Mekel