As an old, storied franchise, the Lakers haven't done much rebranding over the years. The logo has hardly changed since the mid-60s, and the jerseys have had only slight updates. The most notable jersey update was the addition of a white alternate in 2001, a pretty jarring change for a franchise so drenched in purple and gold. Now the Lakers are going the opposite direction. The black "Hollywood Nights" jerseys teased last month have been officially unveiled. This is how they look:

The Hollywood Nights theme in part acknowledges the celebrities like Jack Nicholson that have long supported the team, but also serves as a nod to the huge number of people that work behind the scenes to make up one of L.A.'s biggest industries.

And hey, it's the color of the inside of the mouth of the snake Kobe Bryant nicknamed himself after, so there's that. On that note, here's Kobe modeling the uniform for you, from the release: 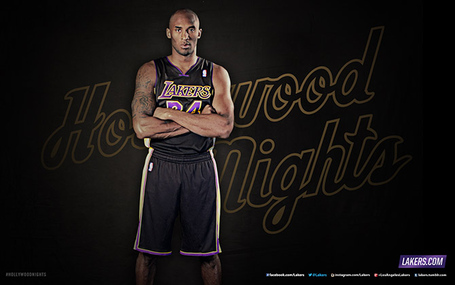 Cool. Reminds me of all the people working behind the scenes in Hollywood. Like gaffers and stuff.

Now, about those sleeves ...