Emeka Okafor's injury opens a door for the Wizards' young big men -- Kevin Seraphin, Jan Vesely and Trevor Booker -- to step up. Can any of them do it?

It's weeks before the beginning of training camp, but the bad news already arrived at the Washington Wizards' door. Starting center Emeka Okafor will be sidelined indefinitely by a herniated disc in his neck, clouding the team's optimistic projections going into the season.

After a summer of small moves by the Wizards to calibrate the roster for a playoff run, Okafor's injury could quickly throw the entire team out of sync. He's arguably the most important defender on a great team defense and his absence could be the difference between a No. 6 seed and a sixth-straight trip to the lottery.

It's not the first time Washington has lost a key player to injury in recent history. When the Wizards lost John Wall for the first two-plus months of last season, it turned a promising campaign into a stunning disappointment long before Christmas. Even if Okafor's not on Wall's level and the team's second-half resurgence offers optimism, this team wasn't built to weather major injuries.

That leads to the most important question surrounding the Wizards, just how bad does Okafor have it? If he's out until the All-Star Break, it may not matter what Wall or Bradley Beal or Nene does. This team may not be good enough to climb from a major deficit in the final weeks of the season.

If there's any good news, Okafor says he doesn't need surgery. That puts him on plan for physical therapy, but the fickle nature of spine injuries makes this an ongoing issue. We've seen players try to hold off surgery before, only to give up when the pain became too much. Okafor needs to hope he's not one of those guys. 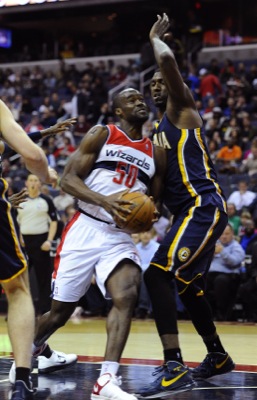 When the Wizards and Okafor's doctors won't describe a timetable for his recovery, it's hard to sit and project where things go from here. He's an extremely hard worker and one of the game's most respected players, but a neck injury could limit him even if he's able to return relatively soon. Just because he's back doesn't mean he's necessarily going to provide the same level of play he showed last season.

The Wizards' huge hole at center stares back at them just weeks before the season. This is what happens when you constantly struggle to draft, develop and retain quality big men.

With the emergence of the Wall/Beal backcourt, the big trades for Nene and Okafor, and finally, the smaller signings like Martell Webster and Al Harrington, the Wizards started feeling like a pretty exciting product. But the construction of this roster always left it susceptible to an injury like this.

Behind Okafor and Nene, Washington's skilled-but-fragile bigs, you see the tattered remains of the franchise's inability to develop its own. Most teams would be thrilled to fill their benches with former top picks on cheap contracts, but only a combination of stubborn optimism and financial commitment keeps these guys on the Wizards.

Suddenly, the lights shining on Kevin Seraphin, Jan Vesely and Trevor Booker just got a whole lot brighter. This was always the problem with Washington's plan, the fact that one injury could force minor players to take leading roles. It's a reality many teams deal with, but rarely is the drop-off so substantial with a non-elite player. Seraphin, Vesely and Booker nicely sum up Washington's last few years of big man development; guys stay intriguing enough to keep when affordable, but never improve enough to be worthy of big minutes or big money.

Emeka Okafor and Nene proved to be a formidable defensive tandem, and most other Wizards frontcourt duos could not match that. (Stats via NBA.com).

Defense is where Okafor's absence will be felt most. Randy Wittman will likely get creative with moving around Nene, perhaps pairing him with either Trevor Ariza or Otto Porter at power forward. But Okafor's ability to limit cutters and protect the basket cannot be understated. This defense, which finished as a top-10 unit per possession last season, will be worse without him.

How can the Wizards survive?

In an ideal scenario, the team makes up some of Okafor's defensive absence by improving on the other end. Seraphin in particular offers some post scoring ability, and Vesely running down the floor with Wall always leads to interesting possibilities in transition. Okafor's a smart-but-limited offensive player who took on too large a role last season, and it's not unreasonable to think an improved Seraphin could actually help in some areas.

That'll require a major jump from the Wizards' young big men, though. For guys like Seraphin and Vesely, this likely stands as the final opportunity for either player to prove his worth in D.C. As much as fans might hate to hear it, how they fare likely determines what happens to the Wizards this year.