There are three places to be in the NBA -- the top, the middle and the bottom. If you're in the middle, there are three ways you can go with it. Don't choose the third way.

Share All sharing options for: The right and wrong way to float in the NBA's middle class

However, this is the NBA, and there's a big, moribund middle ground between those extremes. Without the lure of promotion or the threat of relegation, the middle isn't the sanctity it might otherwise be. The middle -- unless you have reason to believe it is but one small stepping stone to eventually reaching the top -- is a wasteland.

Some teams view the lower playoff seeds as a genuine victory. Some teams have been so bad that it would genuinely be one. At some point, a franchise can become viewed as toxic, and it's a tough decline to halt. Franchises shouldn't strive to be in a position where there exists little incentive for anyone to play for them, or for anyone to watch them. 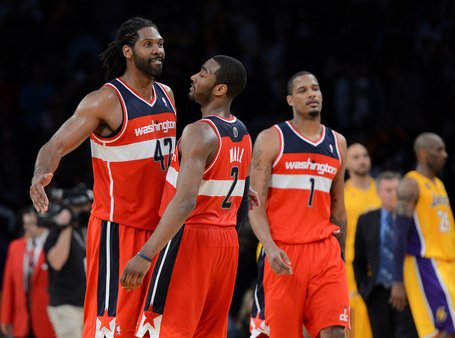 The Washington Wizards have been teetering on this precipice for a while. They went from an overpaid and talented, but ultimately underwhelming, team in the Gilbert Arenas and Antawn Jamison era to a tanking badlands, and now they believe it's time to bring respectability back to the franchise again after enough deliberate losing. They are probably right.

This has been the case for some time. Washington's front office told everyone who would listen last offseason that they fully intended, and expected, to make the playoffs that year. Had John Wall not been injured (and had they actually acquired an NBA-rotation-caliber backup behind him at any point), they could well have done so. Doing so would have stopped a rot for the Wizards franchise, restored a bit of pride to the team, and not cheapened or sacrificed their potential for internal growth that will -- they hope -- see a low seed as a mere waypoint for better things.

Portland, too, is in a similar situation. The Blazers haven't gutted their salary picture to start absolutely from afresh, nor have they ever been known to really do that in recent years. They have retained high-price players LaMarcus Aldridge and Nicolas Batum, as they are the kind of pieces a team will need once it resumes competitiveness. In lieu of the tank, they have instead gotten younger, cheaper and better by select and sensible asset management, and by using the time-honored team building tool of taking advantage of other team's situations and mistakes. They did this when trading Gerald Wallace for Damian Lillard, they did this in picking up the since-departed J.J. Hickson, and they did this in the sneaky-good pickup of the implausibly-overlooked Thomas Robinson.

You don't need to tank to facilitate competitiveness; you just need to get good, young, hungry quality via shrewd asset management and quality drafting, get good coaching, find an identity and a style of play and maximize it. This strategy works if you do it right, and it does so without the risks and noisomeness of tanking. As evidence, see Indiana.

Unabashed tanking, then, is a strategy to be employed selectively

Some teams recognize the perils of being in the middle of the pack and employ the alternative remedy: The full frontal, unabashed tank. Washington did this for a time, and the Sixers are currently putting forth a pretty special effort of it of their own. This too has merits, but also has great perils. If you are unsuccessful in the lottery and/or free agency, be it through bad luck or bad decision making, your franchise becomes more terminal than the middle ground could ever make it. See, for instance, the entire existence of the Charlotte Bobcats. Unabashed tanking, then, is a strategy to be employed selectively, and only with a franchise with a solid understanding of team building, asset management and talent recognition.

This is, however, a third way. You can alternatively dig yourself in and entrench yourself in the wasteland without the hope of salvation. You can be sure to limit your team's potential at 44 wins, more realistically aim for 40 and settle for 37, making each season a limp stagger to mediocrity, spending 82 games fighting for the privilege of being bowled out of the playoffs in only four more. And if you're really committed to this mediocrity, you'll do this while also ensuring maximum roster turnover. 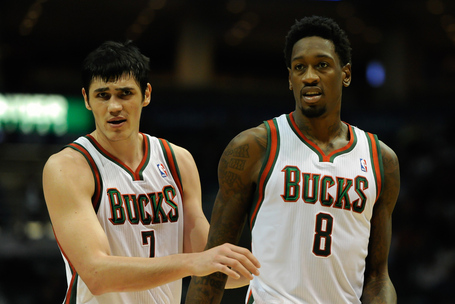 This is what the Milwaukee Bucks have done. And there is no reason for it.

The Bucks have not won more than 46 games since 2000-01, and that 46-36 win season of 2009-10 has been their only plus-.500 record of the past decade. They also haven't lost more than 56 games in that span, never going as far as signing up to the fully fledged tank. That there is the very definition of stagnation. It is not, however, the product of inactivity. Of the 15 players on the Bucks roster, only four were with the team last year. Milwaukee has blown up its previous team, retaining only youngish bigs Larry Sanders, Ekpe Udoh, Ersan Ilyasova and John Henson from last May's impotent playoff team.

They have rebuilt the remainder of the team. Again. But they've done so in a nonsensical way.

Milwaukee's great hope is Sanders, who enjoyed a fantastic breakout season last year and who recently got tied down to a four year, $44 million extension. Their other great hope would have been Tobias Harris, yet Harris was recklessly given away for an unnecessary rental of J.J. Redick, who helped the Bucks achieve absolutely nothing at all before leaving in free agency. So too did Monta Ellis and Brandon Jennings, who -- their inability to coexist notwithstanding -- represented much of the talent level that the Bucks had.

In their place have come a mismatch of best-we-can-get-via-trade young reserves (Khris Middleton, Brandon Knight), an extremely raw draft pick (Giannis Antetokounmpo), a second-rounder with skills, but no obvious upside (Nate Wolters), and a bunch of veterans on unnecessary mid-range contracts, some of whom are previous Bucks castoffs (Carlos Delfino, Gary Neal, Zaza Pachulia). And then for no real reason, Caron Butler and Luke Ridnour also joined via trade.

The $12 million-plus of 30-something backup caliber players invested in Butler and Ridnour is a wonderful means of ensuring a pointless season. It matters not so much what the cost of acquiring someone is -- no one move, nor any one new contract -- is bad in isolation. It is instead their place in the bigger picture that matters, or rather, the absence of any bigger picture. Milwaukee's best bits of business have been getting the flawed-but-useful O.J. Mayo at a competitive price, and picking up Miroslav Raduljica, a one-time bust candidate who is coming off a decent season that helped rekindle his NBA prospects. The other acquisitions make little sense.

Are the Bucks wrong to not "tank" 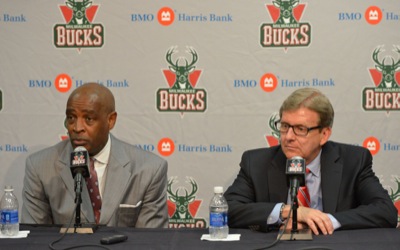 To put it into context, the Bucks are committing $25.12 million to Neal, Zaza, Delfino, Butler and Ridnour, three of whom are also signed through next season. Pachulia will be signed guaranteed through 2016 to compete for minutes with the same players the Bucks are ostensibly basing the future around. Delfino and Neal are taking up money that could instead be used as trade leverage. And all for what? Another first-round exit?

That is not a plan. That is progressing neither forwards nor backwards. That is taking apart a No. 8-seed team and rebuilding it with a possible No. 9 seed. That is mediocrity without hope and a mismanagement of limited assets. The good bits of talent acquisition that they do (Sanders, Ersan Ilyasova, and at one time Harris and Jennings) are wasted and made redundant by the mismanagement of the overall situation. It is incoherent and is only consistent with the Bucks' usual MO of mediocrity -- an MO which needs abolishing.

Washington may or may not achieve their aim of playoff basketball. There's a good chance they may fittingly have to battle the Bucks for a place. The Wizards further may or may not be right in aiming for lower seeds like they are. Nevertheless, they are consistent in their focus and their aim. Wall is the leader, and everyone else is there to help him win 50 games.

On the other hand, the Bucks' leader is Andrew Bogut ... no wait, Jennings ... no wait, Jennings and Monta ... no wait, let's have O.J. Mayo. And Sanders. And Ersan, sort of. The plan then, is to sneak in the playoffs and maybe cause some noise ... although we should also get some raw athletes to develop for the future ... actually, who's going to be our lead guard this year?

... Oh well, let's just stockpile all the second-round picks and see what happens.

• The Hook: Paul George's next leap