Harrison Barnes finds his place in the NBA's hierarchy

After years of hype, Harrison Barnes carved out a useful role for himself in his rookie season with the Golden State Warriors. He may not be a superstar, but he's doing just fine.

Share All sharing options for: Harrison Barnes finds his place in the NBA's hierarchy

Harrison Barnes was made for this, and he's always wanted you to know it.

From the time the Ames, Iowa teenager was appointed the next big thing in recruiting circles, his stories came with the type of prepackaged polish that could only exist in the modern world. He was an honor student in the classroom, Kobe-like in his work ethic when in the gym; a high schooler with an almost frightening sense of branding well before he ever attended the senior prom. This was a bonafide star-in-the-making whose idol was Michael Jordan, not for basketball reasons as much as business ones.

Barnes was almost mature to the point of comedy, a versatile and sublimely talented forward who came across as Alex P. Keaton as much as Kevin Durant. It bubbled over when the No. 1 basketball player in the country announced his college decision.

After meeting with the dean of the law school at Duke, Condoleezza Rice at Stanford and Jordan at North Carolina, Barnes took to Skype to announce he would play for the Tar Heels. Prince's "Party Like It's 1999" blared through the gym hosting the press conference, even if the song was released exactly 10 years before Barnes was born. 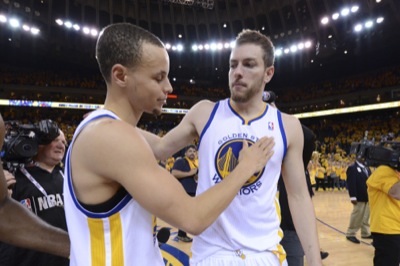 It was a moment to celebrate in Chapel Hill, to be sure, but prophecies aren't always fulfilled on contact. Barnes didn't struggle in his two years sporting Carolina blue, but he didn't light the world on fire, either. It was enough to make some wonder if he was perhaps too concentrated on marketing seminars.

Barnes was knocked for his lack of aggression and inconsistency, mostly, and it caused him to fall to the No. 7 pick in the 2012 draft. While it was quite a slide for someone who entered college as a can't-miss prospect, it ended up working out perfectly for the both player and the team. The Golden State Warriors had plenty of talent, but with one gaping hole at small forward. Barnes was the ideal candidate to fill it.

It took only five games for Harrison Barnes to showcase his NBA-level athleticism while simultaneously making people forget the disappearance of his assertiveness in college. That's when Barnes raised up and a slammed home on Timberwolves center and all-around terrifying human being Nikola Pekovic. It was no small feat:

Barnes would have a few more vicious throw downs that highlighted his regular season, but his overall play remained solid yet unspectacular. On a Warriors team with three or four scoring options ahead of him in the pecking order, Barnes averaged nine points on less than eight shots per game. He finished the year with an uninspiring PER of 11.08.

Everything changed when David Lee suffered a hip flexor injury after Golden State's Game 1 win against Denver in the first round of the playoffs. That's when coach Mark Jackson did something he hadn't done all season: shifted Barnes to power forward. Suddenly the Warriors were spreading the floor with four three-point shooters around defensive center Andrew Bogut. Golden State bombed almost 25 threes per game and made over 40 percent of them before their playoff run would end in six games to the eventual conference champion Spurs. While their overall offensive efficiency remained constant, the spread look clearly added another dimension to the Golden State attack.

Barnes, who had just turned 21 before the playoffs started, was the key to all of it. 'Small ball' has been en vogue for a few years now, but it's only fully operational with a strong, sweet-shooting small forward willing to take on some extra pounding by moving inside. Barnes shot 36 percent from three as a rookie. At 6'8, 210 pounds and with plenty of room to add muscle, he profiles the perfect forward for the ongoing revolution.

Barnes' versatility will be emphasized as he moves to the bench this season. The Warriors signed free agent Andre Iguodala to a four-year contract to act as the team's Swiss Army knife, which means Barnes will likely alternate between the two forward positions depending on whether Golden State wants to go big or small.

Perhaps Barnes will never be the superstar he seemed predestined to become as a high schooler, but he's already proven he's not the bust some made him out to be at North Carolina. There are more than a few teams -- Charlotte, Cleveland, Sacramento -- who are likely already kicking themselves for passing on him.

There's a lesson here on the immediate gratification basketball's culture demands and the hazards of tagging 17-year-olds as sure-fire All-Stars. You can bet that Barnes has been taking notes all the way through. He'll use it to his advantage somewhere along the way, either on the court or off of it.