If Nothing is the Same after a partnership with Drake, the Toronto Raptors might Thank Him Later -- although they'll need to Take Care with their personnel decisions to make his stamp of approval on their revamp meaningful.

The details of the connection between rapper and team aren't immediately clear, but it looks to be wide-ranging. The Toronto Star reports Drake's role will be as a "host, business partner, and consultant," with a part in helping the team launch a full rebrand for the 2014-15 season, a hand in helping host the 2016 All-Star Game, a clothing line and everything in between as the team looks to turn around from a somewhat dismal history*.

I was considering making post entirely awful Drake jokes -- "The Raptors are looking to make Headlines by linking up with Drake; will this end up with Toronto saying they're so they're so they're so they're so proud of him; or wishing they'd stuck to The Motto of adding No New Friends? YOLO!!!!" -- but I think this is actually worth talking about, so I've relegated all that to footnotes**. 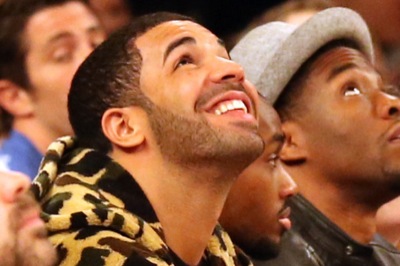 David Roth wonders why so many NBA players love Drake.

In terms of concrete achievements, Jay-Z did little for the Nets. He wasn't the power broker who moved the team to Brooklyn and built them a new stadium. He was merely someone whose birth borough matched the team's new home. He wasn't working the phones to bring in Joe Johnson, Kevin Garnett and Paul Pierce, and he wasn't the guy ponying up financially to make major free agent acquisitions. He just owned a very, very small stake of the team, which he has now sold. He may have done little more than co-sign the team's new look.

But image goes a long way, and the team capitalized on Jay-Z's agreement to lend his. They rebuilt with constant reminders that he was in the mix, and the league got the message that things would be different. That message convinced big name players the franchise was worth joining, and here we are. Jay-Z didn't change the Nets, but he allowed them to change.

It doesn't matter if Drake is actually the person redesigning the Raptors. What matters is they seem committed to making a badly needed relaunch -- "everything but the name" is up for grabs, per the Star, which is good considering almost all of the Raptors' imagery is tired at this point -- and that they've picked the right guy for an association.

Drake is not only the single most popular rap entity at the moment, he's also the rap entity most perfectly designed to appeal to the millionaire youngsters who make up the NBA, as David Roth wrote in a piece I can't recommend highly enough. (Amir Johnson bought out two stores of Drake albums without realizing his team would soon be connected to Drizzy. Way to be a team player, Amir)

Submit media day questions
Can Fields return to form
Is Valanciunas the savior?

It also turns out that Canadian youngsters born around the same time as the Raptors are coming of age, and some of them -- Anthony Bennett and Andrew Wiggins, both Toronto-area guys and probably back-to-back No. 1 picks -- are quite good at basketball. There's a Canadian basketball renaissance afoot, and Drake is the person in those players' headphones***.

In the Raps' mind, they're in for a Nets-esque turnaround****. But it won't be easy: unlike Brooklyn, they don't have a new stadium or a deep-pocketed owner. And, well, Toronto doesn't have the same pop culture cachet as Brooklyn outside of Drake.

The Drake factor won't just spark a wayward franchise via osmosis. The team will actually need to convince people his coolness is associated with an equally cool franchise revamp. He's got enough of athletes' ears that might be able to convince players that playing for the Raptors is OK, but first off, new GM Masai Ujiri needs to put the team in a position to land those players. Thus far in his career, Ujiri has seemed like a minor miracle worker at every stop, including his deal to get rid of Andrea Bargnani.

The good news is that the Raptors are interested in being relevant, and they've recruited the most relevant person possible to be on their team. Now, the real things have to work in tandem with the superficial things. Or, like so many other Drake relationships, this will end up with wistful drunk 3 a.m. phone messages.

* -- You could say that the Raptors are starting from the bottom.

** -- Also redacted: A joke about how Vince Carter is the Best (Player the Toronto Raptors)

*** -- These players will have to play for a non-Toronto team for a few years, but after that, I guess you could say that you should just hold on to see if they're going home. I guess you could also say it depends on whether all they care about is money and the city that they're from.

**** -- You could say the Raptors just wanna be Successful.