The 76ers hold all the cards, but don't have to play any of them

Having sat out the entire free agent market, Philadelphia is in the unusual position of needing to spend several million dollars just to meet the team minimum salary requirement. But as bizarre as this is, it just doesn't matter.

Share All sharing options for: The 76ers hold all the cards, but don't have to play any of them

As has been excessively documented, the Philadelphia 76ers are still quite a way short of the minimum team salary threshold. Lull of the offseason notwithstanding, this story has been overplayed for three reasons: the threshold doesn't need to be met for several months yet, it will inevitably be met before then and, most importantly, it doesn't really matter at all if it is never met.

Philly's tanking strategy is hugely unsubtle and a tad unsavory, but entirely logical. Knowing they hadn't enough talent or incumbent potential to become a contender in time soon -- particularly in light of the absolutely staggeringly, debilitatingly unsuccessful trade for Andrew Bynum -- they decided, as best as possible, to stop acquiring any. They traded away their best player for someone who can't take the court, haven't signed a single free agent and, given that one of the few rumored free agent candidates they've been linked to was Chris Duhon, should probably continue to not bother signing any. It's an emphatic tank job, and yet, tough as those can be to reconcile with a fan base, it seems worth it here.

The 'punishment' for missing the minimum salary threshold is merely that you get charged up to the amount of it anyway. That's it. The excess is divided up amongst the players on the roster at a percentage determined by the NBA Player's Association, and that's all that happens. That's not a punishment at all. That's not even really a penalty. And thus, going over it for the sake of going over it would be meaningless.

Moreover, things won't stay this way. I know not of any instance of a team failing to meet the minimum salary threshold, for the simple reason that there's no point in missing it. If you're going to have to pay $52,811,100 in salary anyway, which the 'punishment' guarantees, then you might as well get some players out of it. The minimum threshold does not have to be met until the final day of the regular season, and there's many months of trade talks between now and then.

This $7.5 million gap between the Sixers' team salary and the minimum salary threshold, and the $13 million in cap room they still boast, is no burden. Indeed, it's the greatest trade asset in the league. Philly can use this to take on salary (and importantly, the assets) of other teams who want or need to trim it. They've already done this on a small scale four times. It cost them roughly $4 million of that space and one second-round pick to land all five of Royce White, Tony Wroten, Tim Ohlbrecht, James Anderson and Furkan Aldemir (whose NBA career will be found somewhere on the oft-drawn curve between Reggie Evans and Michael Bradley). This is what cap space is for: the cap management to acquire pieces for the future. They could have burned that $4 million in a bidding war for Carlos Delfino, but what would be the point?

That said, the days of mass salary dumping from taxpaying or near-taxpaying teams onto blatant tankers may not be like they used to be. This past offseason, half of the teams in the league had cap space; five years ago, only three teams did. With the incentives to lower payrolls now far greater, more teams are engaging in it. Spending is down, contracts are small and shorter and payroll flexibility has been made a heightened priority. This has been aided in no small measure by the amnesty clause; a lot of the chaff that would have been traded outwards is instead now being cut. 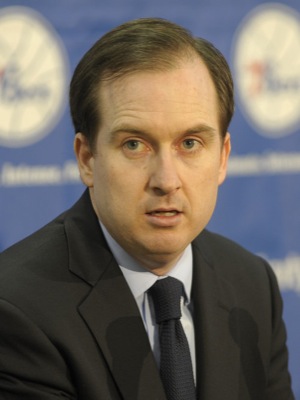 The 76ers' season will be bad, but not this bad. Right?

Those teams who do have enormous payrolls and little flexibility are generally there on purpose. Brooklyn, New York and Miami are the most obvious and extreme examples of this. Only three other teams (Chicago and both L.As) are due to pay the tax this season as things stand, and with so many more teams than candidates for 2014/15 cap room, there is not going to be a huge clamor for teams to open up more room.

Nevertheless, the practice does still happen, as Utah proved earlier this summer. And further candidates are out there. On a large scale, Chicago would take any call offering to take Carlos Boozer. Shifting Jason Richardson's dead salary out the other way, plus the usual returning assets, potentially tempers the loss of 2014/15 cap flexibility for Philly. (Although they would have to be very good assets because Boozer's contract is freaking enormous.) Moving Willie Green gets the Clippers under the tax, and, on a purely asset management level, the Sixers could accommodate his return for a small fee. Those in proximity to the tax such as Memphis and Toronto, who have used the stretch provision on Fab Melo and Quentin Richardson just to open up more flexibility under the tax threshold, could always benefit from a little more. And then, of course, there is Kendrick Perkins.

Options abound, then, and the market can yet change dramatically in the five months until the deadline. Until that time, Philadelphia will be happy to float along with their current young core, lose heavily and hold all the cards in the trading stakes for a few months. They have the potential to facilitate the entire trade market this coming February, as well as next June.

But let's not wrongly insist that they have to do something. They don't.

• Ziller: Michael Beasley is the argument for incentive-based contracts