The Pacers' elite defense is as strong as ever. Meanwhile, the two New York teams are making a push up the rankings, while injuries have the Pelicans falling fast.

The Pacers' offense has hit a bit of a rough patch, but the defense continues to be absolutely stifling. Indiana has given up less than 80 points in three of their last four games, and they're currently giving up a league-best 92.6 points per 100 possessions.

The Spurs have won four games in a row, with three of them being of the blowout variety. In the one close game during the winning streak, Manu Ginobili played hero against Memphis:

After a two-game losing streak, the Blazers got back to their winning ways by beating up on a couple bad Eastern Conference teams. There's one more game against an East foe before a tough four-game road trip against some of the better teams in the Western Conference.

The Heat hit a bump in the road last week, losing both games on a two-game swing in New York. A two-game losing streak in January won't faze Miami, although LeBron James got fired up during the loss to the Nets thanks to a hard foul by Mirza Teletovic:

The Thunder have been all over the place since Russell Westbrook went down again. An 11-point loss to the Jazz was bad, and that was followed up by a drubbing at the hands of the Nuggets on national television. Almost like Westbrook is super important.

Stephen Curry does really cool things a lot. Like this:

J.J. Redick returned to the lineup on Friday as the Clippers flat out embarrassed the plummeting Lakers. Redick made his presence felt, scoring 19 points in 23 minutes.

The Rockets had quite the interesting experience in Washington, D.C. over the weekend. Playing again without Chandler Parsons, Houston blew a 25-point lead against the Wizards before pulling ahead. But the strangest parts of the game were the two rain delays due to a leaky roof. One of the delays starred Dwight Howard entertaining a young fan:

A couple of games against the injury-riddled Pelicans was a nice remedy after a blowout loss against San Antonio. Dirk Nowitzki was vintage Dirk in the second game of the home-and-home, notching 40 points in a three-point win:

The Raptors took a hammer to the Nets' five-game winning streak on Saturday, with DeMar DeRozan notching 26 points. Toronto looks completely legit, and it seems like only a matter of time before they take over the No. 3 seed in the Eastern Conference.

The Nuggets are back on a roll after their eight-game losing streak. Denver has won five games in a row, with the last four being blowouts.

Eric Bledsoe's knee injury is a huge blow to the Suns' playoff chances. Phoenix is 2-4 in the last six games without Bledsoe, and while the youngster may return this season, it could be too late. 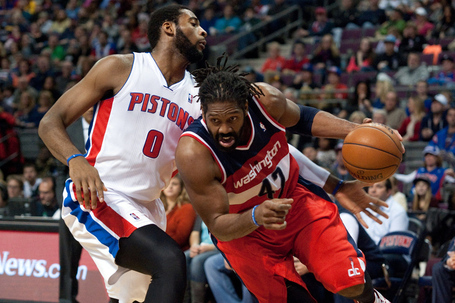 Tom Ziller digs into the numbers to find out if tanking really works. Turns out luck plays a role in everything, and there's no foolproof way to win in the NBA.

The Wolves continue to be a bit of a mystery. Minnesota has the statistical profile of a team that should be well above .500, but they sit at a game under .500 thanks to their struggles in close affairs. Kevin Love voiced his frustrations after the latest close loss, and Love's situation is one to be monitored if the Wolves don't make a playoff push.

The Hawks came up with two huge wins last week, beating the Pacers and Rockets. Unfortunately, that was followed up by a loss at Memphis. But hey, Kyle Korver's streak is still going strong!

The Bulls actually did it. They traded Luol Deng. There were some doubts about whether Chicago would trade Deng, but they pulled the trigger and received some financial flexibility by acquiring Andrew Bynum and then waiving him. Interestingly enough, the Bulls are 3-0 since the trade.

The Grizzlies continue to get back on the right track as they await Marc Gasol's return. Mike Conley has been playing some brilliant ball of late, averaging 24.0 points and 7.8 assists in the last five games.

J.R. Smith dominated headlines with his shoelace antics and subsequent benching, but on the court, the Knicks may have just figured things out. Five wins in their last six, including impressive victories over the Spurs, Heat and Mavs. And the one loss was a heartbreaker in Houston.

It's tough to blame the Nets for the egg they laid against the Raptors after their exhilarating double-overtime victory over the Heat on Friday. Prior to the loss, Brooklyn had won five in a row. New York Basketball is back!

Wizards head coach Randy Wittman ethered his team after a loss to the Rockets over the weekend, saying they started the game looking like an AAU team. Washington is still the No. 6 seed in the East, but things aren't pretty for them at the moment.

The Pistons may have hit rock bottom last week, but they're now riding a two-game winning streak. Over the course of the week, Josh Smith couldn't have had different game-winning attempts. First there was this:

Then there was this:

Sacramento Kings? A juggernaut? Not exactly, but they've resembled one the past three games. First, the Kings beat the Blazers. Then came two straight beat downs, with the the latest a 44-point destruction of Cleveland. Next up is a tough six-game road trip, so we'll see if Sacramento has really started to turn things around.

The Cavs made a bold move by trading for a possible Luol Deng rental, but they're really desperate to make the playoffs this year. The first game with Deng was a rousing success, but I'm betting Mike Brown will want to burn the tape of the 44-point loss to Sacramento.

The Pelicans have been just ravaged by injuries this season. Jrue Holiday is the latest key piece to go down, and it's unclear just how long he'll be out with a stress factor in his leg.

The Bobcats really need Michael Kidd-Gilchrist back in the lineup. The defense, which was a strength earlier in the year, has been performing at a league-worst level in January.

The Jazz came up with one of their best wins of the season last week, beating the Thunder by 11. Gordon Hayward was out of his mind in the win, scoring the last 17 points of the game for Utah:

The Celtics have lost eight games in a row, although if you want to look for silver linings, they've been competitive in the last three games against tough Western Conference competition. In other news, Rajon Rondo said he'll be back before the All-Star Break.

The Lakers are just downright atrocious right now. Losing by 36 to the Clippers on national television was a real embarrassment, and things probably won't get much better any time soon thanks to the plethora of injuries.

The Magic aren't just losing games, but they aren't even competitive. Seven losses in a row, with the last five coming by an average of 19.6 points.

Remember how the Bucks were trying to be good this year? That was cute.