Toronto thinks it can compete with anyone, for good reason. The Raps have beaten the NBA's two top teams in the last two weeks.

TORONTO -- The Toronto Raptors were 6-12 when Patrick Patterson learned he'd be joining the team. They'd lost five in a row, and rumor had it they were trying to make more moves to try to keep that win total low. Patterson found out about the trade over the phone as he was walking into a movie theater to see The Hunger Games: Catching Fire and he kept right on going. Patterson enjoyed the movie with his mother, told her the news afterward and got ready to go to Toronto.

Despite the Raptors' situation in the standings, he brought no negativity with him.

"When I got traded here I was just worried about fitting in, learning the system, bonding with the guys. Then, what happens, happens," Patterson said after a recent win.

What's happened has been remarkable. The shorthanded squad split the first two games after the departure of Rudy Gay, Quincy Acy and Aaron Gray, and Toronto has gone 8-2 since the new additions -- Patterson, Greivis Vasquez, John Salmons and Chuck Hayes -- arrived from Sacramento.

Lowry, Raptors on the up and up

James Herbert on the play of Toronto's point guard during this surprising run.

Is this real life?

Raptors HQ's recap of Wednesday's stunning win over the Pacers.

Lowry, Raptors on the up and up Is this real life?

Wednesday, the Raptors defeated the Indiana Pacers, 95-82, to knock Indiana out of sole ownership of the league's best record. The Pacers are now tied at the top with the Oklahoma City Thunder, who Toronto handed their first home loss of the season 11 days prior.

"We should only really have one loss since the trade," Patterson said, explaining that the Raptors should have been able to avoid losing to Charlotte in overtime on a Kemba Walker buzzer beater.

"Other than that, it just seems like things are smooth," he continued. "There's no problems, no egos on the team, everyone gets along. The friendships have already been built. Off the court activities, whether it's just us hanging around one another or just going to dinner or just text messages saying what's up."

The tense, frustrated locker room of early December has been replaced by a loose, optimistic one in Toronto. If one thing is obvious watching this team play, it's that they believe in themselves.

In that game against the Thunder, the Raptors trailed by 11 points late in the third quarter. Two nights earlier in Dallas, they fought back from down 19 for an overtime victory. In Chicago on New Year's Eve, they shot 37 percent through three quarters and then outscored the Bulls 28-17 in the fourth to earn another come-from-behind win.

Still, when Indiana took an eight-point lead early in the third quarter, most didn't expect Toronto to take it back before the start of the fourth. They did, though, and then answered every Pacers push.

"We're never going to lay down," Johnson said. "It says a lot about our team, our heart and our willingness to fight and come through." 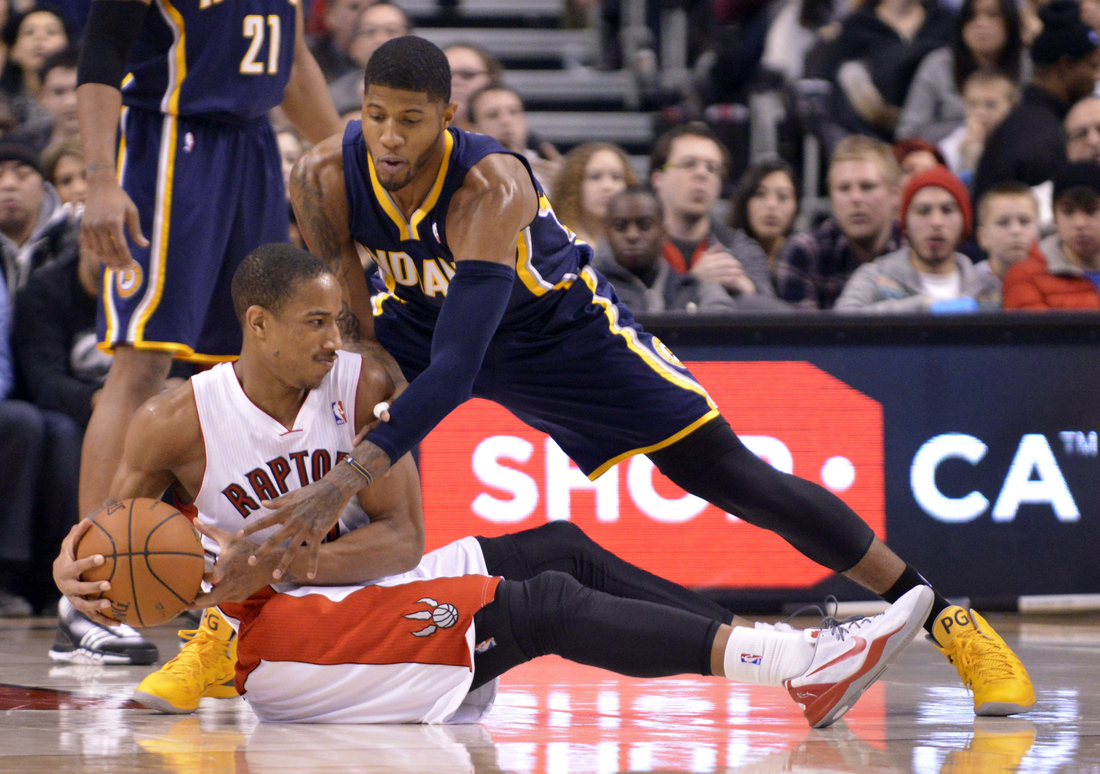 Part of the reason the Raptors acquired Gay late last January was to take pressure off of DeMar DeRozan. This time last year, DeRozan always saw the opposition's best wing defender, and Gay changed that. Post-Gay, it's back to the way it was, meaning that DeRozan's the guy who has to deal with Paul George hounding him all night. He shot just 6-for-18 through the first three quarters against George, then efficiently scored 10 of his game-high 26 points in the fourth, showing how his game and his teammates' trust in him have grown.

"I think [trades] could make or break a team and I definitely think they made it with this trade," George said.

"I just understand when my team needs to lean on me in the fourth quarter, I have to pull through," DeRozan said. "Can't be tired, can't have no excuses, I gotta do whatever I can to help this team win."

DeRozan's in his fifth year in Toronto and has yet to play a postseason minute. Johnson is the only teammate he's had from the beginning, and both want more than anything to change that. They're on their way now, and it's realistic to target the No. 3 spot in the weak East.

Raptors head coach Dwane Casey went into the Indiana game talking about having to match the Pacers' intensity and physicality. That's exactly what happened. Toronto got center Roy Hibbert in foul trouble and held George to 12 points on 5-for-14 shooting, with six turnovers. 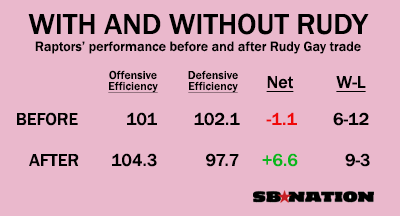 "They have a lot of all-star players on their team, but our guys battled," Casey said.

These new Raptors managed 27 assists on their 32 field goals, with point guard Kyle Lowry accounting for 14 of them, two shy of Indiana's total as a team.

"Everybody's just playing for each other," second-year swingman Terrence Ross said after scoring 18 points, more than any Pacer, on 6-for-12 shooting. "Nobody has any secret agendas. Everybody wants the same goal and we're all on the same page."

Dwane Casey told the team nothing was guaranteed in this league aside from their current contracts, and they had to band together.

With the slow start, Toronto is only 15-15 on the season, but its recent play is attracting attention. When these teams meet in Indiana next Tuesday, the Pacers will know what to expect.

"I think [trades] could make or break a team and I definitely think they made it with this trade," George said.

When the Raptors found out about the deal, they were in the Staples Center, preparing to play the Lakers. The story was supposed to be Kobe Bryant's return from his torn Achilles, not the first major trade of the NBA season. The players were shocked. There were sighs, there were hugs. If tears were avoided, it was close. This was a fork in the road. Casey told the team nothing was guaranteed in this league aside from their current contracts, and they had to band together. You can watch it on YouTube.

"What's going through our head, it's like, ‘Yo, we gotta continue to work, we can't be down, we still have a job to do,'" Johnson said. "Our job is basically just to figure out a way we can win the game and then the players that we got in, the next step was to figure out if we could work together and make the team work again."

Now it's not a question of if. Toronto knows what's working.

• Andrew Bynum going, going, back, back, to Cali, Cali?