How the Bobcats will survive without Kemba Walker

The Charlotte Bobcats will be without their leading scorer and distributor for 10-14 days because of a ankle sprain.

Share All sharing options for: How the Bobcats will survive without Kemba Walker

A second-degree ankle sprain to point guard Kemba Walker puts the Charlotte Bobcats in a serious hole as they sit a game out of the eighth and final Eastern Conference playoff spot.

Walker, who is his team's leading scorer and distributor, had been working better with Al Jefferson lately, but now that he's out for 10 to 14 days while his ankle recovers, the Bobcats will have to wade through a difficult stretch of games:

Steve Clifford's team will need to replace the point guard's production, and the issues become magnified considering Charlotte's offense ranks third-worst in the NBA at 100.2 points per 100 possessions, according to Basketball-Reference.

And that's with the heavily-relied-upon Walker in the fold through the first 42 games this year.

So what questions will be answered from the Walker-less Bobcats in, at the very least, the next four games?

It will be on the entire roster to find comfort with the ball in other players' hands. Walker led the NBA with 88.8 frontcourt touches per game and total touches this season. He was also tied for fifth in the NBA in time of possession, according to SportsVU tracking data.

Ramon Sessions immediately steps into Walker's starting spot with the chops to plug most of the massive hole. 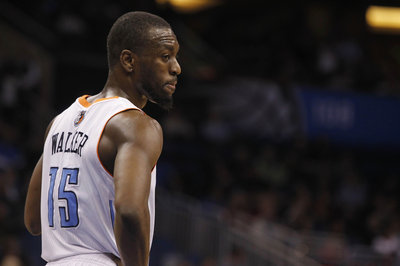 Charlotte loses Walkers patented pull-up jumper, among the best in the league, but like Walker, Sessions can get to the hoop -- he shoots 4.3 free throw attempts per game -- and he's already a productive member of Charlotte's offense. Sessions is averaging 10.4 points and 3.1 assists off the bench. He could easily be good for around 15 points and five assists without Walker, but the key will be continuing to feed Jefferson his usual 16.6 field goal attempts per game.

Third-string point guard Jannero Pargo is the candidate to play backup point guard, and though he's only played spot minutes this year, the veteran can be a steady presence for the NBA's least turnover-prone team.

The biggest issue, then, is if Pargo or any of the Bobcats' bench players can replace the loss of what Sessions usually brings. Shooting guard Chris Douglas-Roberts and even Ben Gordon could be asked to provide some offensive punch.

Who scores in the clutch?

The Bobcats' games have been decided by an average of 3.0 points, and Walker has been one of the most-used players in close, late-game situations. The point guard has a usage percentage of 35.3 in games that have a point differential of five or less points in the final five minutes, placing him close to all the big guns like LeBron James, Kevin Durant, Kyrie Irving, Carmelo Anthony and Dirk Nowitzki, according to NBA.com's stats tool.

Jefferson is the most obvious option to be the go-to player in the clutch, but then it becomes about whether Charlotte can get him open opportunities. In all likelihood, teams will be crashing down on Jefferson with double teams as soon as the ball is thrown into the post.

Can the Bobcats make them pay? It's a problem that Clifford's staff will need to solve throughout entire games, not just in the clutch.

Who can stretch the floor?

The Bobcats simply don't have the shooters to help Jefferson's post game out, and Walker's 35.5 percent three-point shooting will be missed. That number is not that impressive, but it did help Charlotte, considering he took 4.4 threes per game.

Sessions is shooting just 20 percent from three-point land on the season and has been erratic from that distance over the course of his career. Pargo is somewhat capable as a 35-percent shooter from deep for his career, but likely won't be on the court for extended periods. The onus will be on power forwards Josh McRoberts and Anthony Tolliver, who are shooting 35.5 and 45.7 percent, respectively, from three-point range.

Late in games, it could come down to Sessions creating off the bounce and either getting to the hoop or hoping there's the spacing to find sub-par shooters, who don't shoot the ball well in catch-and-shoot situations. That, or Jefferson will have to make quick decisions with passes out of the post as defenses swarm him more aggressively than normal.

The Bobcats never had much production alongside Walker, without him it's not only about making up for his scoring. It's also about having a firm grasp of how to work through the offense without Walker directing the way.

The good news is that a two-week span without its leading scorer might not be enough to seal Charlotte's lottery fate in a weak Eastern Conference.

• The Hook: Why NBA teams are scoring so much this season