LaMarcus Aldridge and Dwight Howard square off on Martin Luther King Day. Elsewhere, the Knicks face the Nets in a matinee and the Pacers visit the Warriors to wrap up the night.

Share All sharing options for: 2014 NBA schedule: Blazers go for 6 in a row against Rockets, Knicks host Nets in MLK Day matinee

Monday is Martin Luther King Day, which means afternoon basketball! There are 10 games on the docket, with the first two beginning at 1 p.m. ET. And not only is there basketball pretty much all day, the schedule is highlighted by three marquee matchups. Let's take a closer look.

The streaking Blazers will look to nab a sixth straight win when they face the Rockets on Monday night. Portland is finishing up its swing through Texas, having already beaten the San Antonio Spurs and Dallas Mavericks.

LaMarcus Aldridge has been as brilliant as ever of late, averaging 29.0 points and 13.0 rebounds during the five-game winning streak. Going up against Dwight Howard will be a challenge, but Aldridge did have 31 points and 25 rebounds in a 111-104 victory over the Rockets on Dec. 12. 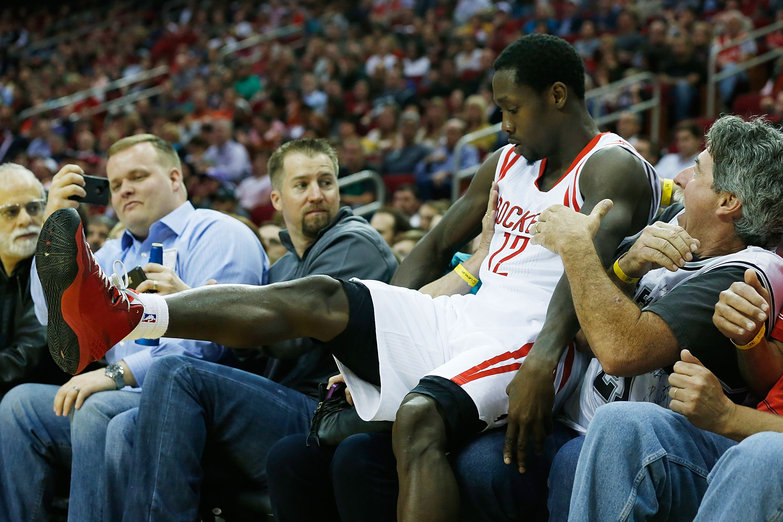 Howard has had plenty of his own success against the Blazers this season, averaging 30.5 points and 15.0 rebounds in the two previous games this year. James Harden is averaging 31.0 points in hist last five games against Portland.

However, the X-Factor could be Terrence Jones, who has been playing extremely well. In the Rockets' win over the Milwaukee Bucks on Saturday, Jones notched a career-high 36 points and grabbed 11 rebounds.

Houston also is hoping the return of point guard Patrick Beverley also will make a difference. Beverley has missed about a month with a fractured hand.

The first time the Nets and Knicks played this year, New York won by 30 points at the Barclays Center, punctuated by Andrea Bargnani talking smack to Kevin Garnett. Brooklyn is playing much better now, and they'll look to get some revenge when they invade Madison Square Garden in a MLK Day matinee.

The Nets have gotten themselves back into the Eastern Conference playoff picture despite Brook Lopez's season-ending injury. Brooklyn currently holds the No. 8 seed in the East, one game ahead of the Charlotte Bobcats. The Nets just returned from a big victory over the Atlanta Hawks over in London, and Deron Williams will return to the lineup after missing five games with another ankle issue.

Meanwhile, the Knicks have hit a rut after appearing to turn things around. New York has lost three games in a row, with all three of those losses coming by double digits.

Adding injury to insult, Amar'e Stoudemire and Kenyon Martin are both dealing with foot issues that will keep them out a few weeks. In better health news, Pablo Prigioni is set to return from a toe injury. Will we actually see a two-point guard lineup and Carmelo Anthony at the 4?

The Pacers have just been throttling teams during their four-game winning streak, winning by an average of 23.3 points. Indiana now kicks off a five-game road trip out west, starting with a tough game at Oracle Arena against Golden State.

Paul George has been brilliant the last three games after a dud of a performance against the Washington Wizards. George is averaging 30.7 points in his last three outings, shooting 61.9 percent from three in the process.

Andre Iguodala will likely get the George assignment for the Warriors, who are coming off a 10-point win over the struggling New Orleans Pelicans. Stephen Curry had 28 points and eight assists in the win.

Other games (all times ET)

• The Hook: Why NBA teams are scoring so much this season