Kevin Durant's playing like the NBA's Most Valuable Player

Kevin Durant said he was tired of looking up at No. 1 last April. Now he's eye to eye with the king at the top, and if the season ended today, he'd deserve the MVP.

The words "Kevin Durant" and "NBA MVP" have been muttered together for the past few weeks, and with good reason. The Thunder and Durant have been quietly excellent all season, but his 54-point outburst against the Warriors was as loud of a "don't forget about us" statement as he could have made.

If Durant goes on to capture his first Most Valuable Player honor, it won't be because of "voter exhaustion." It'll be because he's at the peak of his climb to the NBA's throne.

Durant's been considered one of the NBA's greatest talents for years and will go down as one of the greatest scorers the game has ever seen, but his long arms are reaching higher than ever before. The way he's blasted defenses since Russell Westbrook underwent knee surgery has him on track to achieve something that's eluded him since joining the league: Eclipsing LeBron James. 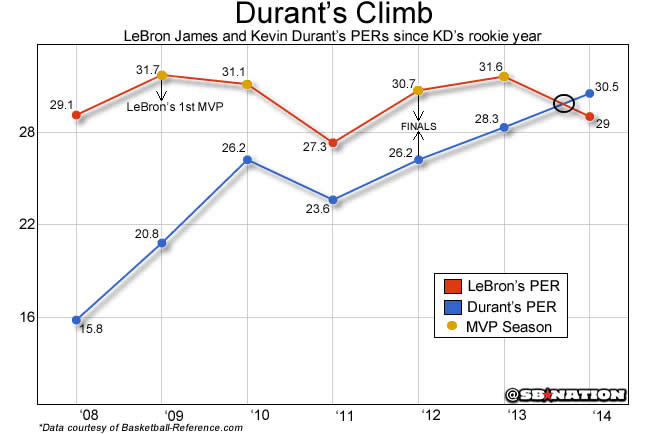 PER isn't the end-all, be-all, of course, but it's a great snapshot of just how productive a player has been. When you're topping LeBron James in anything, it's a pretty good indication that something is going right. The fact that he's doing it without Westbrook makes it even more incredible.

The elevated responsibility Durant has shouldered for the Thunder hasn't crushed him. Instead, it's created a perfect storm that could usurp King James. Oklahoma City needs Durant now more than ever, and he's delivering.

That's not to say Westbrook is holding Durant back. The Thunder need Westbrook's otherworldly talent to compete with the elite of the NBA, as evidenced by their so-so record by their standards without him.

But the incredible hot streak that Durant is on without his partner in sublime shouldn't be taken lightly. Sure, Westbrook's 17.9 shots per game lowers the percentage of possessions that end in Durant's hands, but he's also one of the NBA's best shot creators. In Westbrook's 25 games played, he assisted Durant for 78 made field goals, according NBA.com. That means he assisted Durant on 3.2 of his 9.2 made field goals per game during that stretch. 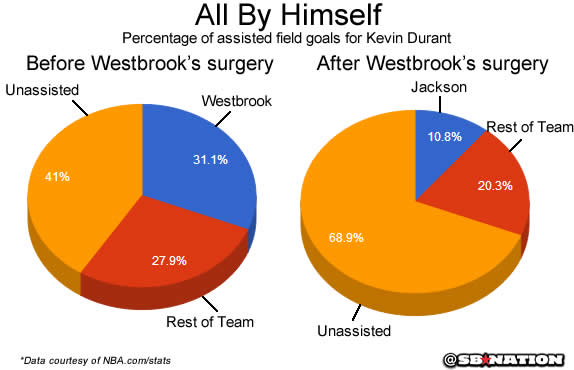 Durant's teammates haven't been able to replace Westbrook. Instead, they've barely managed to match him. Reggie Jackson and the rest of the Thunder have assisted Durant on 31.1 percent of his shot attempts combined -- the exact percentage Westbrook was creating for him on his own. Durant's therefore shouldering a huge burden, but steamrolling through the road block. Durant has raised his shooting percentage and assists while also lowering his turnovers per game, despite being the primary focus of opponents and handling the ball more. He's attempting more field goals and free throws per game and his true shooting percentage has actually gone up in Westbrook's absence. No one should be surprised his scoring numbers have seen a bump, but improving his efficiency along the way is a testament to how unstoppable Durant has been. 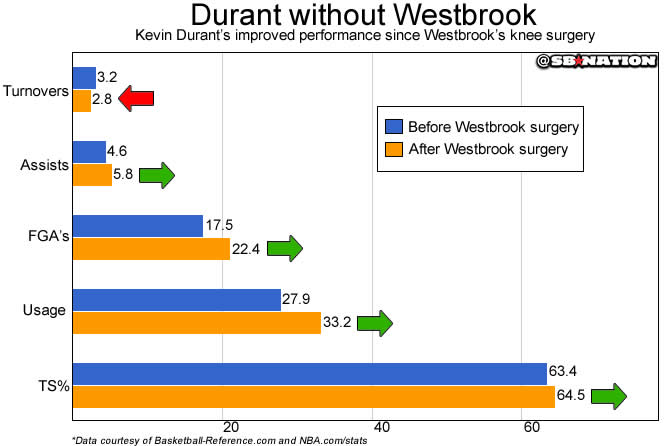 Get news, links and Ziller's #hottakes with Good Morning It's Basketball in your inbox every weekday morning.

This is what MVP seasons are made of. Huge scoring outbursts, winning tough games and every statistic to back up the narrative. Durant is doing it all, and his latest tear through the NBA will weigh heavily when it's time to crown a new MVP. Westbrook will eventually return and the NBA season hasn't even reached the All-Star break in February, but this stretch of phenomenal play is a declaration of supremacy. This is brilliant play from the same player who said he was tired of being No. 2 last April and hired his own personal analytics team to gain an edge. The same player who recently scoffed at LeBron saying he's "jealous" of Durant's shot attempts.

He can do whatever he wants.

Yes, LeBron can do anything. There's still half a season left, and taking the MVP away before the battle has concluded would be disrespectful to his incredible talent. Maybe he can lift his play and stop Miami from yawning through the season. It's happened before.

But Durant has played outstanding ball through the first half of the season. If he continues playing at this level, he's just 41 games away from earning his first MVP award.

• Ziller: The 7 most desperate NBA teams at the trade deadline

• Flannery: This is Rajon Rondo's challenge