'Hammer time': Breaking down one of the San Antonio Spurs' favorite plays

The Spurs' favorite set play has become more common across the league. We break down how they do it in this week's edition.

Share All sharing options for: 'Hammer time': Breaking down one of the San Antonio Spurs' favorite plays

There have been many famous people nicknamed "Hammer" in the world of sports. "Hammerin' Hank" Aaron. Dave "The Hammer" Schultz. Fred "Hammer" Williamson. My all-time personal favorite, M.C. Hammer.

In the world of the NBA, you even have the "Polish Hammer": Washington Wizards center Marcin Gortat. But in the NBA, the word "Hammer" is most closely associated with one of the most successful franchises of all time, the San Antonio Spurs.

We explain what this phrase means as it pertains to NBA defenses.

"Hammer" is the name of a Spurs set (or actually, sets) that creates pick-and-roll misdirection on the side with the ball, leading to a step-up or flare screen on the opposite side. That step-up is the "Hammer" screen that hopefully frees up a player for a corner three-point shot. You may have heard through the grapevine that the corner 3 is a pretty efficient NBA shot.

For all of its moving parts, "Hammer" action is pretty basic. Its goal? Get the defense shifting towards a strong drive to the hoop and exploit its ingrained instinct to watch the ball and then help the helper. All it takes is for the opposite wing defender to turn his gaze just for a moment to watch the ball to nail him on an effective step-up or back screen.

Here's a series of Hammer plays, curated by Zak Boisvert, an assistant coach at Fairleigh Dickinson University, and used with permission.

Ideally, the screen should be angled just slightly to the wing defender's outside shoulder so the shooter can flare to the corner area behind the three-point line. The screen should also force the big man's defender to try to close out on the shooter all the way from the key area.

The Spurs will run various versions of "Hammer." "Al Hammer" involves a wing cross screen before the rejected pick-and-roll and penetration leads to the "Hammer" screen. (All diagrams are, again, via Boisvert, used with permission.) 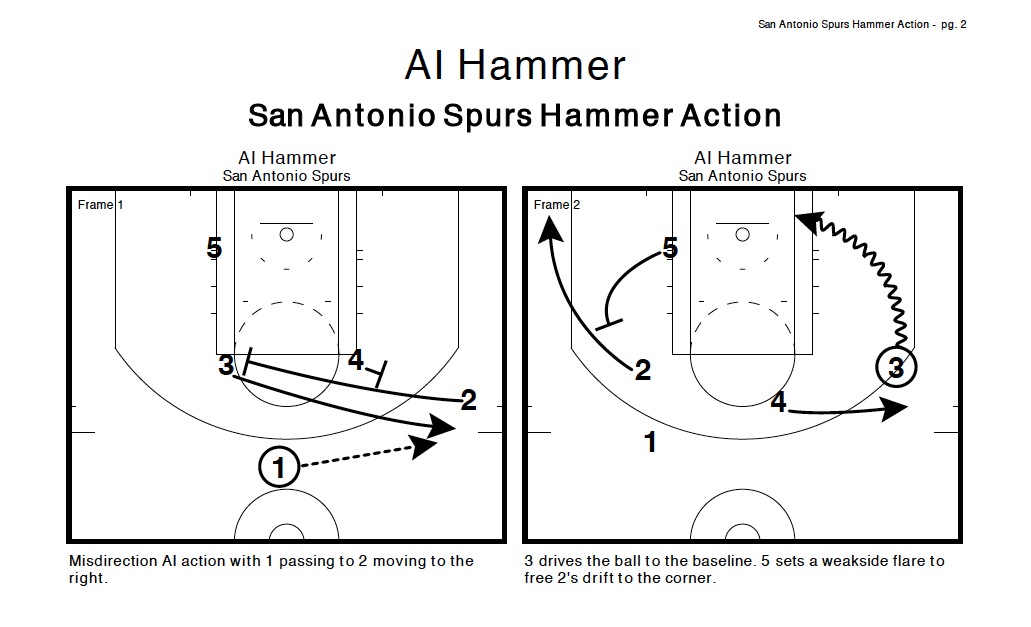 "Step-Up Hammer" features a diagonal dive by the trailing big man. This sets up a fake pick-and-roll with the other big and a "Hammer" screen by the original diagonal cutter. 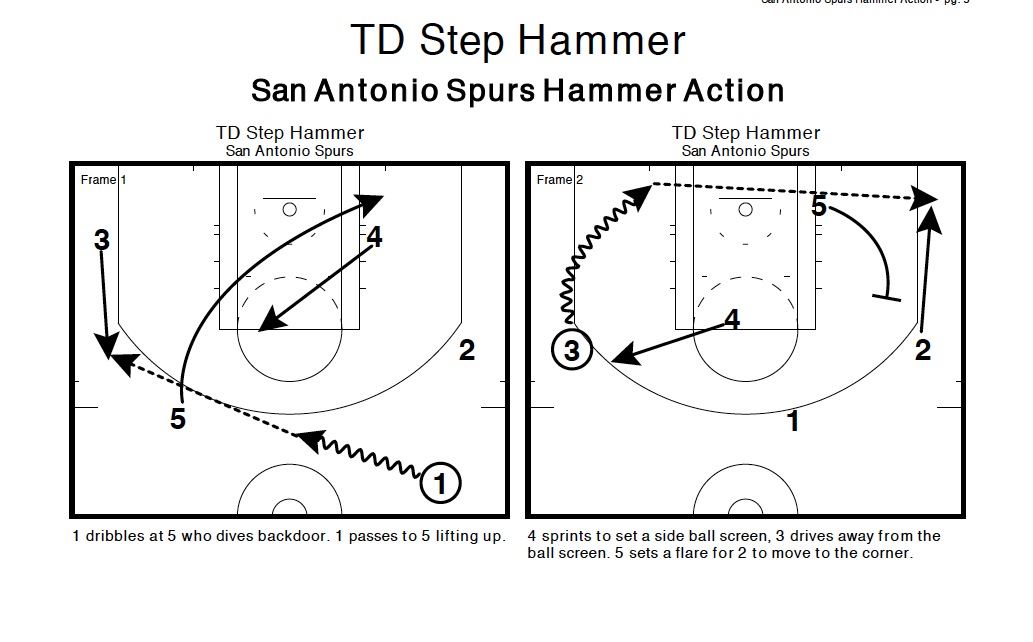 "Zip Hammer" involves a zipper cut (a cut moving from the baseline up to the top of the key off a screen, like a zipper moving smoothly up a pair of jeans) and a ball reversal before the rejected pick-and-roll opens up the "Hammer" screen back on the original side. 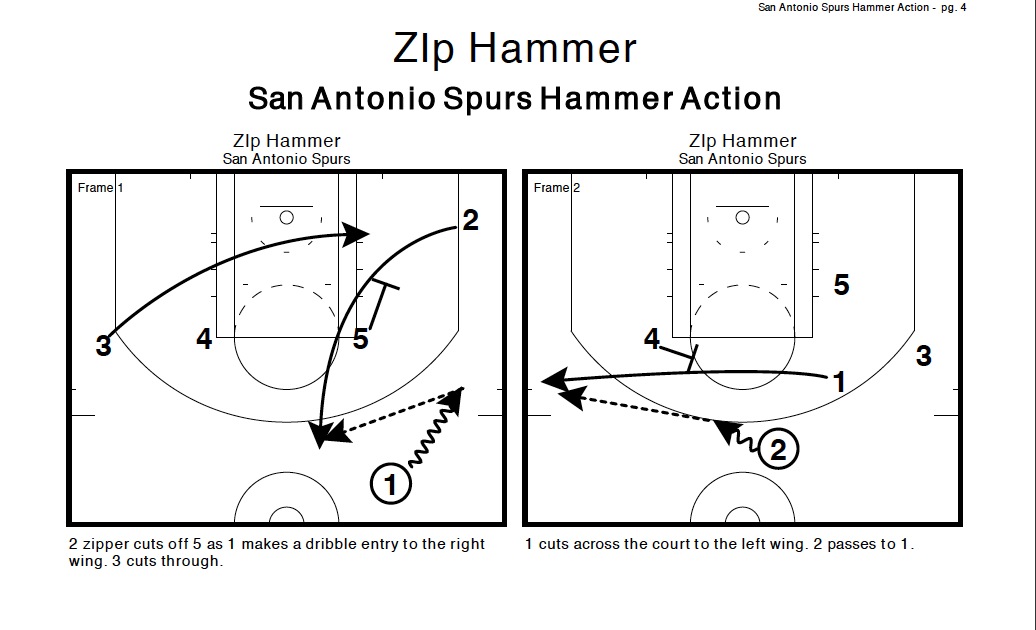 Pick-and-roll misdirection followed by a strong step-up screen on the opposite side. These simple elements, executed by the San Antonio Spurs, equal half-court success. They also equal "Hammer Time," minus the parachute pants.

For more on the Spurs' "Hammer" action, head down to the legendary ...

This week's ATO suggestion is courtesy of my very first Twitter follower, ESPN Insider's Kevin Pelton (@kpelton). You may have heard of him. He's very big in the advanced pocket square community.

This week, I'll attempt to answer the question of what happens in your huddle when the opposing team takes a timeout to weave a little ATO magic? What are you, the defensive team, doing in your timeout?

Obviously, you are setting your own defense coming out of the timeout, finalizing the matchups and reinforcing how you are going to play any screens and the pick-and-roll. You are also staying positive and stressing the difference that a stop will make.

But what you're also doing, especially outside of the last two minutes, is determining what your team's next set will be after the defensive stand. Unless your team has more than three timeouts remaining, you don't want to have to burn a TO before you can advance the ball into the front court. At the two-minute mark, regardless of how many TOs you have, you'll be left with three for the remainder of regulation (one full, two 20s).

Following a San Antonio miss, the Portland lead is four points, Blazers coach Terry Stotts decides to take a full timeout at 2:52 of the fourth quarter. No big deal, right? Actually, yes, a big deal. Since there would be the automatic under-three minute timeout at the next stoppage in play, Stotts might as well take the time to set up an action that will maximize Portland's opportunity to increase its lead.

After the ball is inbounded just behind the center line, Damian Lillard (covered by Tony Parker) initiates the action by dribbling diagonally from right to left. LaMarcus Aldridge (marked by Tim Duncan) establishes position at the high post. Nicolas Batum (defended by Marco Belinelli) starts out on the left side, above the three-point line. Comic Book Man, aka Robin Lopez, is just off the right high post (Diaw defends) and Wesley Matthews is positioned in the right corner (Manu Ginobili guards him).

As Lillard begins moving into the front court, Batum V-cuts towards the baseline and pops back off of an Aldridge screen. Lillard hits Batum quickly with a pass and cuts hard off of his top shoulder. 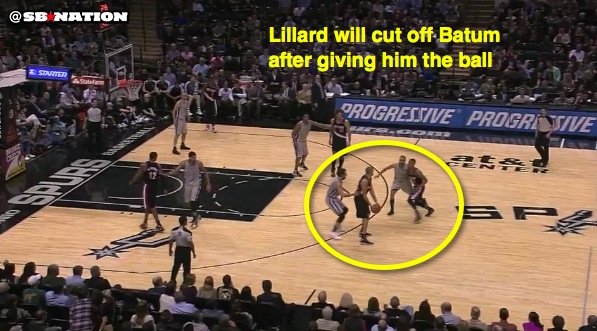 Nic uses this hard cut to fake a handoff and begins dribbling towards a middle screen from Lopez. At this point, everything is just hunky-dory with the San Antonio defense. As Batum comes off of the Lopez screen, Belinelli does a nice job of fighting over and staying relatively attached. Robin's man, Diaw, slides into a good neutral show position just below the screen. However, the help the helper man, Manu Ginobili, takes a little peek over at Batum as this happens. This sideways glance will hurt the Spurs a few seconds down the road. 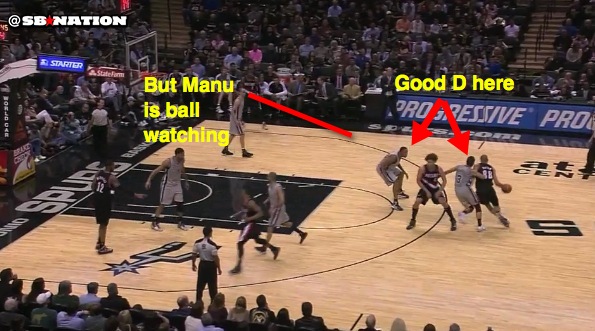 As Batum advances around the screen, the real action begins, as Matthews begins to move up from the corner towards Batum. Manu, he of the little looks, trails Wes and begins to anticipate a switch with Marco Belinelli. This places both Ginobili and Belinelli flattened out and below the ball. 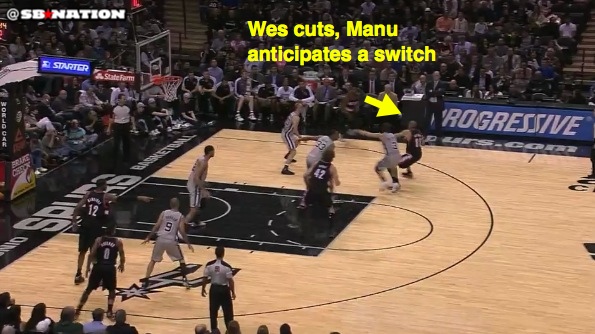 Batum and Matthews then run a perfect "DHO" (dribble handoff), allowing Wes to catch and shoot the 3 straight off of the exchange. Because both Manu and Marco are basically zoned up on either side below the Batum screen, thinking the other will switch, Matthews gets an unbelievably clean look. Belinelli closes out but it is much too late. Trail Blazers, up by seven with 2:35 remaining. 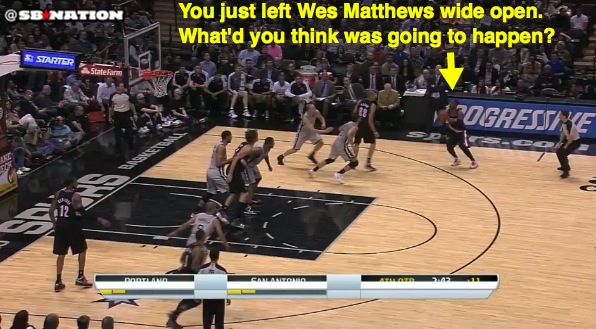 Following Portland's excellent ATO execution and Matthews' 3-pointer, San Antonio inbounds the ball to Parker. Parker crosses the halfcourt line on the right side of the court, with Diaw trailing in the left slot. Ginobili and Belinelli are already stationed on the wings, with Duncan at the right side high post.

San Antonio is set up to run its classic "Step-Up Hammer" action off of this alignment. As Parker starts to veer left with his dribble, Boris Diaw makes a diagonal cut towards the basket. Usually, the Spurs' 4 or 5 man would make this cut and circle under the basket (to be the man who makes the "Hammer" screen seconds later). 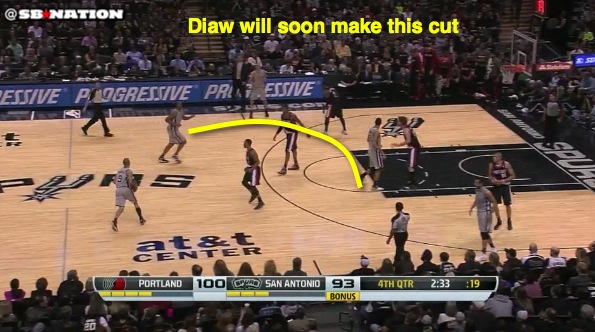 As Boris executes his move, Parker makes a pass to Manu on the left wing. Duncan moves down the key, looking like he is moving into position to cut off Diaw's big/big cross screen. Belinelli remains at the three-point line. As Boris gets near Duncan, he abruptly pulls a U-turn and circles back to set a middle screen for Manu on the right wing. 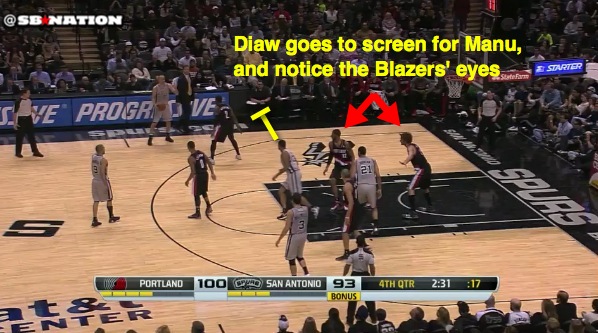 The Portland defense begins to anticipate the Diaw/Ginobili screen and starts to shift accordingly. Diaw's man, LaMarcus Aldridge, begins shouting "Blue" -- see last week's column for an explanation -- as the screen approaches and Wes Matthews adjusts accordingly. However, both defenders are now a beat off of the music.

On "Step-Up Hammer," Manu rejects the screen and begins to drive hard left towards the basket before Portland can contain the pick. Robin Lopez, who was guarding Duncan, slides down to cut off the penetration and protect the rim. As Manu approaches the hoop, Duncan moves back up the lane to set a step-up screen on Batum for Belinelli. This is made possible because Batum has momentarily shifted his focus to the driving Argentinean. Plus, his weakside defensive partner, Lopez, can't yell out and communicate the screen because he is busy helping Matthews on Ginobili's drive. 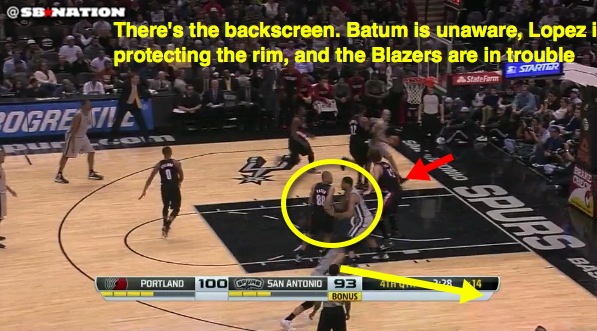 The result? "Hammer Time." Ginobili makes the pass to Marco Belinelli in the corner. Batum is sealed off by Duncan's slightly angled screen, so Lopez is forced to close out to the corner all the way from the restricted area. Too late, big man. Belinelli splashes the 3. Gioco. Set. No partita. 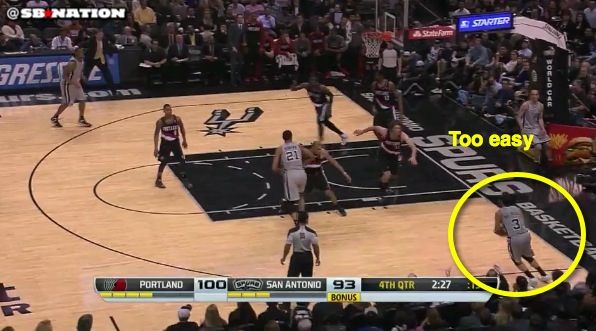 What else would you expect from Gregg Popovich ... erm, Assistant Coach Jim Boylen, since Popovich was tossed out of the game at the 7:18 mark in the third quarter. The state of Maine kind of strikes again for San Antonio. First, Brett Brown and now Jim Boylen.

Not to rain on the Spurs' coaching parade, but Portland went on to win the game, 109-100. Game. Set. Match. But this sequence is an excellent example of two-way planning coming out of an ATO.

** if you have an ATO to suggest, please tweet or email me with #ebeATO.

• Drive & Kick podcast: Grizzlies get back on their Grit 'N Grind