Miami's recent struggles may be overblown, but only if their star shooting guard can be healthy enough for the playoffs.

Share All sharing options for: Dwyane Wade remains the cause and solution to all of the Heat's problems

For a team that's reached the NBA Finals three straight seasons and has won the last two championships, the Miami Heat sure have spent a considerable amount of time in January entrenched in self-defense mode. Whether it's LeBron James having to answer questions about coasting or Dwyane Wade preaching patience with his troublesome right knee through Twitter, everybody wants to know what's wrong with the Heat.

Even after dropping a hapless Lakers team at home Thursday night, the Heat are just 6-4 over their last 10 games, and those four losses weren't pretty either. Miami fell to the maddeningly inconsistent Wizards and Knicks, lost to a Nets team playing without its two best players and a Hawks team without Al Horford.

There are plenty of reasonable concerns for Miami at the moment, but the uniqueness of the situation might be overblown. The Heat's current lot in life doesn't look all that dissimilar from where they were at last season after 43 games. What happened in game No. 44, a victory at Toronto, was the start of a 27-game winning streak.

Miami's last loss before the winning streak a season ago happened against the Pacers on Feb. 1. At that point, they were 29-14. If Miami's struggles seem significant at the moment, remember they're currently 31-12. They also don't exactly have a ton to play for the rest of the year. The Heat aren't dropping from the No. 2 spot in the Eastern Conference standings no matter what, and it would likely take another long winning streak to make Indiana seriously sweat for the top spot. 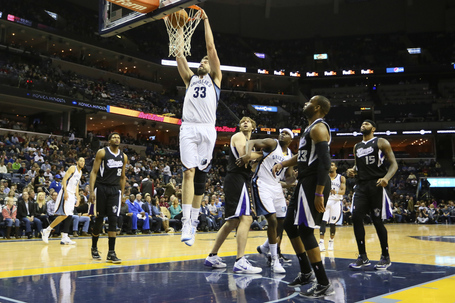 The Pacers continue to dominate the competition, while the Grizzlies' five-game winning streak has them in the top 10.

There's a few notable differences between this year's Heat and last year's team, though, and it starts with Wade. The Heat are playing the long game with Wade's health, hoping to preserve his knees in the regular season so he's fresh for the playoffs. Wade has missed the Heat's last four games and now 30 percent of the season. When he's out of the lineup, Miami's 7-6.

That's when the Heat's other problem rears its head: Their defense starts to slip. Miami is 1.6 points better defensively when Wade is on the court, per NBA.com. His absence has magnified a new truth about the roster: There isn't much depth on the wing. The Heat enter the weekend No. 11 overall in defensive efficiency, the lowest they've been since James and Chris Bosh signed on. In their four recent losses, they've allowed 102, 104, 114 and 121 points, respectively. None of those the opposing offenses rank in the top half of the league.

It's a problem the Heat created for themselves, to an extent. Miami used the amnesty clause on Mike Miller before the season to save luxury tax dollars and maintain flexibility moving forward, but none of the in-house options have emerged as reliable contributors. Michael Beasley has had more downs than ups after a promising start, and Roger Mason Jr. can't crack the rotation. It has left Miami more dependent on Ray Allen than ever, but the 38-year-old is finally beginning to show his age. Who ever thought they would see the day when Ray Allen shoots under 34 percent from three-point range?

We know better than to worry about the Heat, particularly when it's only January, but Wade's health issues aren't going anywhere. He's the key to the entire operation, both in the present and the future.

Nearly all of Wade's absences this year have officially been listed as "rest." There's more than a hint of designed  Popovich-ian restraint in that, but it only works if Wade is actually healthy enough to be a plus on both ends of the floor by the time the playoffs roll around. Wade's been great when he's played this season, averaging 18.9 points per game on a career-high 54 percent shooting, but he's still a player who needed to have his left knee drained before Game 7 of last year's Finals. That's the same knee he had surgery on after Miami's first title. Lately, Wade has been battling bone bruises in his right knee that started to become an issue last season.

Even if Wade returns healthy, shines in the post season and helps the Heat get past the inevitable conference finals matchup with Indiana, the long-term condition of his knees will weigh heavily on James' mind when he considers his future as a free agent this summer. James knows what it's like to be surrounded by a weak supporting cast from his days in Cleveland, and he's already shown a willingness to leave a crumbling situation for a better one. That's what brought him to Miami in the first place.

Wade's presence was what made the formation of the Heat seem so excessive from the start, the fact that James could upgrade from having Mo Williams and Zydrunas Ilgauskas as his best teammates for seven years to joining one of the top players in the league. But how appealing will Miami be for LeBron if Wade has to miss this much time going forward?

That's a worry for later, though. For now, the Heat have to take one championship at a time. With the game's best player still somehow getting better, it wouldn't surprise anyone if James keeps stacking titles through the rest of his prime. The question he'll have to consider after this year is whether Miami is the best place to do it.

The answer, just like this season's fortunes, will likely rest on Wade's shaky knees.

• Breaking down one of the Spurs’ favorite plays

• Drive & Kick podcast: Grizzlies get back on their Grit 'N Grind