Carmelo Anthony had a historic night Friday in front of the home crowd.

Special things happen in Madison Square Garden; the historic arena is a gold mine of legendary basketball performances. On Friday, Knicks star Carmelo Anthony added to that tradition with 62 points, the most in a single game in franchise and Madison Square Garden history.

Bernard King previously held the Knicks scoring record with 60 points and Kobe Bryant's 61-point performance was the most ever in the Garden prior to Friday night.

.@carmeloanthony: "It was just one of those zones you go into. Only a certain group of people know what that zone feels like." #Melo62

Anthony scored in a variety of ways: in the post, where his size was too much to handle, as the pick-and-roll ball handler, in spot up situations and in isolation. Most impressive, though, was the sheer efficiency with which he scored.

Known as a bit of a gunner, it took Anthony just 35 shots to notch his career high. Bucket after bucket, the Garden crowd cheered and stood to admire Anthony's accomplishment. In the fourth quarter, faint chants of "M-V-P" could be heard coming from the crowd. 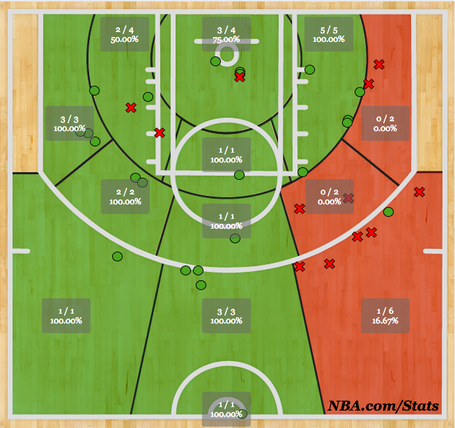 Anthony isn't a plausible MVP candidate, but his performance on Friday was brilliant and will certainly live on in Madison Square Garden legend.

The record-breaking shot came in typical Anthony fashion. He caught the ball in the post and the Bobcats sent a double at him, but he spun away from the second defender and banked in a floater right outside the right block. The play happened with 7:23 left in the game.

After breaking the record, Anthony was pulled from the game to a standing ovation. He deserved it; his performance Friday night was historic and well worth applauding.

• Coach Nick: How Dragic and the Suns lit up the Pacers’ defense