Chandler Parsons hits NBA-record 10 threes in a half

Chandler Parsons was on fire over the final 24 minutes Friday night against the Grizzlies.

Share All sharing options for: Chandler Parsons hits NBA-record 10 threes in a half

Houston Rockets wing Chandler Parsons broke an NBA record Friday night with 10 three-pointers in a half. The University of Florida alum didn't hit a single long ball in the first 24 minutes against the Grizzlies, but knocked down 10 in the second half, giving the Rockets at least a chance to win late.

The hot shooting came out of nowhere, but Parsons hit all six of his long range attempts in the third quarter and 4-of-5 in the fourth quarter. His last make came with 1:51 left to play and brought the Rockets within one point, 88-87. That was, however, the final score as his last attempt -- a 30-footer with just over a minute left -- fell short.

Neither team scored for the remainder of the game and Memphis snuck out with a victory, but it was Parsons who stole the show with his incredible hot streak in the second half. His shot chart is a thing of beauty: 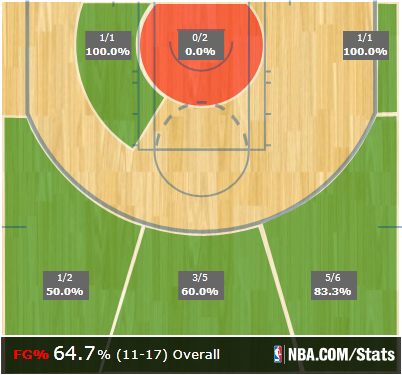 In all, Parsons recorded a career-high 34 points. Quite a performance from Houston's sharp-shooter.

• Coach Nick: How Dragic and the Suns lit up the Pacers’ defense