Just halfway through his second season, Terrence Ross has a 51-point game on his resume.

TORONTO -- Terrence Ross scored one point on Monday in Charlotte and three Wednesday against Dallas. Coming into Saturday's game against the Los Angeles Clippers, the Toronto Raptors swingman was averaging 9.2 points per game. His career high was 26. Halfway through the third quarter, he flew in for a putback dunk, deflected a pass on the perimeter and finished an alley-oop to violently eclipse that mark. That 20-second stretch made the Air Canada Centre as electric as it was when Vince Carter was jumping out of the gym. Several threes, drives and free throws later, Ross entered rarefied air, tying Carter's franchise scoring record with 51, set in February of 2000.

Before the unprecedented outburst -- according to Elias Sports Bureau, no NBA player averaging single digits had ever reached 50 -- Ross' only moment in the national spotlight was winning the dunk contest. Forget All-Star weekend, this was far and away his most incredible Saturday showcase.

"And then I went off," Rivers said. "I said, ‘Guys, that's what he does. You think he's a dunker, he's really a shooter.' And I probably shouldn't have said that. I probably should have left them a surprise. Maybe we would have been more excited. But he was great."

Rivers felt free to joke about it since Los Angeles ended up with a 126-118 win, but his team should have known better. Ross is making 40.7 percent of his three-point attempts in his sophomore season, and his confidence is worlds better than it was as a rookie. Absolutely no one expected 51, but this was the surest sign yet that he is capable of reaching his substantial potential.

Ross shot 16-for-29 from the field, 10-for-17 on threes and 9-for-10 from the line. That said, those outrageous numbers alone can't capture the difference between this version of Ross and the one who often looked unsure of himself. The bold, 30-foot bomb he made to tie the game at the end of the third quarter illustrated it best. Ross knows the rest of the Raptors did not want him to hesitate, and he said he just tried to shoot it every time he was open.

"Unbelievable, he did an unbelievable job," Toronto point guard Kyle Lowry said, pausing for a few seconds to try to find more words. "That's it. Unbelievable."

Lowry added, "It kind of makes me speechless a little bit."

It's easy to be enamored with Ross' game. There aren't many players who you can imagine winning both the dunk contest and the three-point shootout. There are fewer who are in their second year and are regularly tasked with guarding the opposition's first option.

Perhaps Ross' most impressive accomplishment before Saturday was holding the Pacers' Paul George to 12 and 11 points on 35 percent shooting in two meetings this month. DeMar DeRozan is the Raptors wing generating All-Star buzz this season, but Ross has the talent to do that in the future, and he's displayed the defensive focus required for his coach to trust him now. 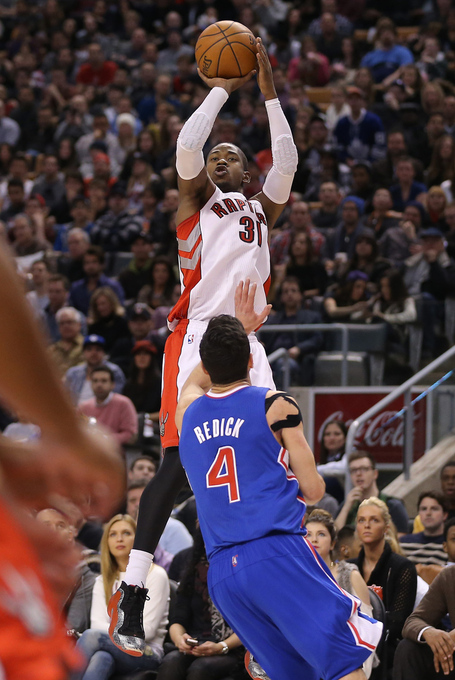 Ross -- a Portland native and University of Washington alum -- is the fourth player to drop 50 or more at Toronto's ACC. One of the others is Jamal Crawford, a Seattle legend who played for the Blazers during Ross' last college season. Crawford had worked out with Ross before he was a professional, watched him play for the Huskies and talked with his father. After getting into a bit of a shootout with Ross -- Crawford finished with 37 --  Crawford embraced him near center court.

Membership in that club brings higher expectations. "Now he's told on himself," Toronto head coach Dwane Casey said. That doesn't mean he has to make more history, but Casey said he wants to see more of the same aggressiveness. Ross is still establishing himself in the league and chasing consistency. The Raptors hardly run plays for him and, in spells when they're not moving the ball, Ross can be almost invisible. This eruption presents a powerful argument that his teammates should always be trying to find him. The results can be stunning.