Kevin Durant is on another level

The extent to which Kevin Durant is lighting up the league is unreal.

Share All sharing options for: Kevin Durant is on another level

What do we even call what Kevin Durant is doing now? Calling his recent performances incredible or dominant doesn't even capture it. Calling him unstoppable is obvious. Look at his game-winner from Monday night again, look at how every Atlanta Hawks defender has his eyes on Durant, how three of them contest the shot, how none of them make an impact at all:

Correct, Official Atlanta Hawks Twitter Feed! Now look at Durant's shot chart from the last six games, a stretch where he is averaging 39.8 points, 6.7 rebounds, 6.5 assists and has a true shooting percentage of .765: 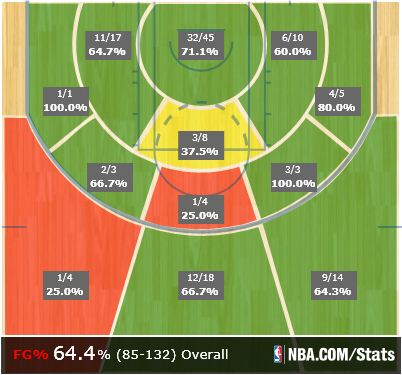 What even is that? That's stupid. The man has scored 30 or more points in 11 straight games and 14 of his last 16. He has five 40-point games in January, a month where he has a .714 true shooting percentage in the last five minutes of games when the scoring differential is within five points, per NBA.com. If you were watching the Oklahoma City Thunder play the Hawks, you weren't the slightest bit surprised that he led them back after trailing at the end of three quarters. You expected him to hit that game-winner, as well as the huge stepback jumper he made 24 seconds prior to it.

Take away his late-game explosion against the Portland Trail Blazers, his triple-double against the Philadelphia 76ers and his 54-point game against the Golden State Warriors and he'd still be the Player of the Month in a landslide. No one is even close.

"There are very few people in the world who have the ability to do what he's doing," Oklahoma City forward Nick Collison said, via the Oklahoman's Darnell Mayberry. "He's playing great, the best I've ever seen him play."

"He is the best player in the world right now," the Blazers forward said. "What can you say about him? He is the MVP. He is the MVP. I have been six years in the league, and I've never seen something like that."

Durant was playing at an MVP level before this month. He was playing at an MVP level even before this season. This is a whole different thing, though. His PER is now 31.15, and LeBron James is in second place at 28.74. Durant didn't want to put his run in the same category as similar streaks by Kobe Bryant, Michael Jordan and James, but it's just as crazy as any of them.

It's not like Durant needed to find another gear, but with Russell Westbrook out of the lineup, he has. It's putting everyone at a loss for words.

"There's nothing more to say," Thunder head coach Scott Brooks told reporters on Monday. "He's a special player. He's going to be an MVP candidate until he decides to retire."