Anthony Davis is the NBA's next transcendent talent

Anthony Davis is on track to accomplish things on the basketball court that only the greats of the game have. The signs are everywhere that he is primed to be the NBA's next generational frontcourt talent.

Share All sharing options for: Anthony Davis is the NBA's next transcendent talent

Nov. 8 was the night Anthony Davis really arrived as an NBA star. The New Orleans Pelicans were hosting the Los Angeles Lakers, pitting former All-Everything center Pau Gasol against the 2012 No. 1 pick. What happened from the opening tip to the final buzzer sounding was a complete and utter destruction, as Davis finished the night with a career-high 32 points, 12 rebound and six blocks.

There was one play in particular that really stood out. Gasol came across the lane for his patented lefty hook, an unblockable shot for mere mortals. Not for Davis, though. He swatted it with his left hand, sprinted up the court and finished an and-one attempt at the rim before anyone could even blink. Gasol could only slink to the free-throw line once the play was dead and throw up his arms in frustration.

At just 20 years old, Davis has been everything a franchise dreams about when they land the No. 1 pick in the NBA Draft. Trying to single out the right guy with the first pick in hand is a gamble, but selecting a 6'10 big man with a 7'4'' wingspan and freakish athleticism is as simple a choice as splitting aces in blackjack. You do it immediately and never think twice.

Drafting Davis is already a huge success for a franchise reborn under new ownership and namesake. He's going to be the center of the universe for New Orleans basketball for years and deserves to represent the Western Conference when the All-Star game rolls into the Big Easy this February.

He's averaging the mythical 20 points and 10 rebounds per game in his second year in the NBA, joining Kevin Love, LaMarcus Aldridge and fellow Kentucky Wildcat DeMarcus Cousins as the lone four players accomplishing the feat through the first half of the season. He's the only one in that group that's also averaging over two blocks per game, and by a large margin.

Did I mention he's just 20 years old and in the second year of his career? As a point of comparison, it took Kevin Garnett — the player often mentioned as Davis' upside — four seasons before he broke into the 20/10 club.

It's been over a decade since a player of any age has averaged at least 20 points, 10 rebounds and three blocks. It's been two decades since a 20-year-old player has accomplished the incredible feat — the last under-21 player to do it was Shaquille O'Neal. Only Hakeem Olajuwon and David Robinson have ever finished a season also averaging at least 1.5 steals per game on top of the rebound, scoring and block averages.

As a two-way player, few of any age are Davis' peer.

Davis' athletic tools were given to him so he could become a defensive demon, and he's already wreaking havoc across the NBA.

- Who needs verticality rules when you don't need to leave your feet?

He still needs to gain strength, but his wingspan already makes him a difficult player to attack. Opponents are shooting just 40 percent against him in post-up situations, according to MySynergySports.com. He's allowed only 30 made field goals out of total 75 percent when posted-up, holding his assignments to .81 points per possession. He isn't bulky enough to push people around or hold his ground yet, but his length makes him a tough player to shoot over at the rim. He's also athletic enough to stay with his man in isolation and is already learning how to take advantage of his insane wingspan.

As our Mike Prada wrote:

The Pelicans' defense is a mess, but don't blame Davis for that. He's outstanding on that end; the rest of the club, especially since Jrue Holiday got injured, is not. The coaching staff doesn't help.

But the glimpses of Davis' potential that we witnessed at times last year have become more numerous. If you read my notes on Pelicans games, you'll see several lines that just say "ARMS" and a timestamp. Those refer to times when Davis' wingspan makes what is normally a simple offensive play complicated. Sometimes, for example, something as basic as throwing an entry pass becomes a problem.

Davis has become one of the NBA's best rim protectors already. Opponents shoot just 45.8 percent at the rim when he contested a shot, the sixth-best mark in the NBA for all frontcourt players averaging a minimum of 30 minutes per game, according to SportVU data. He's has six more rejections this season than Serge Ibaka — the three-time defending shot-blocking champion — despite playing in eight fewer games. If Davis isn't stopping players at the rim, he's using his wingspan to make shooting over the top of him impossible.

Ten rebounds per game generally earns players a stamp of approval. Five players in NBA history have finished a season averaging double-digit rebounds at the age of 20. If Anthony Davis can finish the season maintaining his rebound average, he'll join Andrew Bynum, Dwight Howard, Elton Brand, Shaquille O'Neal and John Drew as the only 20-or-under players to accomplish this.

He isn't just gobbling up errant shots that fall into his lap either. He's pulling in the sixth-highest amount of contested rebounds — boards that are gathered when an opponent is within 3.5 feet of him — in the NBA, according to NBA.com. Out of that top-six pool, he pulls in the highest percentage of available contested rebounds per game.

Davis' length and athleticism allow him to sky over players who are still waiting for the ball to be within reach. He's in the top-five in offensive rebounds at 3.9 per game and averages 1.13 points per offensive rebound putback chance, according to MySynergySports.com.

And he still has room to grow here. His rebounding percentages are solid — grabbing 21.7 percent on defense, 12 percent on offense and 16.7 percent overall, per NBA.com — but there's no reason to believe he's anywhere near his ceiling.

Davis is a phenomenal defender and a great rebounder which, alone would make him an elite presence in the NBA, but he's dropping 20.4 points per game on 51.9 percent shooting. His offense is the rawest part of his game but he's still able to score efficiently. 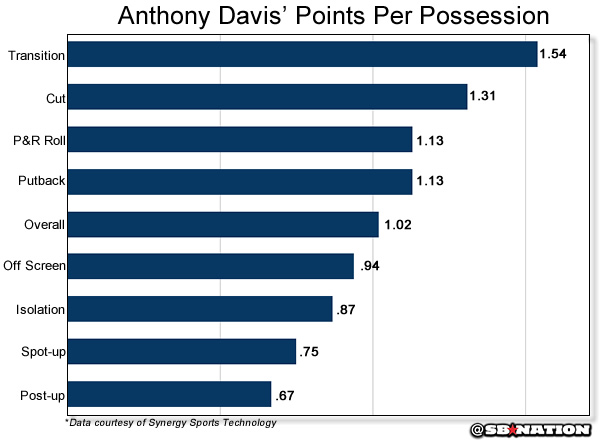 Davis is especially dangerous because he dominates in areas where he can use his physical tools while he refines his skill set. He kills teams in transition, using his great speed and long strides to propel him in front of unset defenses. He's great at reading the defense, moving off-ball and sneaking around the baseline. He rolls to the rim with a purpose and pounds thunderous dunks down after grabbing offensive rebounds.

- No big deal. Just blocking Dirk's fadeaway, beating everybody back in transition and jamming it home.

Put shorter: He makes the most of his physical attributes, instincts and expanding basketball I.Q. to score the majority of his points without having a ton of plays directly called for him, though that is slowly changing.

Instead of being stifled from attempting mid-range jumpers, he's feeling out his range. He's learning how he can be effective in the post instead of being boxed into robotic moves that aren't in his arsenal. He's pushing and prodding any limitations instead of living a basketball life restricted by them. These are the things that will make him dangerous in the future.

Davis isn't a "traditional" back-to-the-basket big man who is going to back players down. He's better off facing up an opponent and taking them off the dribble. There's no telling where his offensive game will be in five or six years — when he's actually reaching his prime and not in the infancy stages of his career — let alone in the next two years. He has the freedom to test his game out and develop his talent. That's exactly what he did to the Cavaliers on Tuesday night, dropping 30 points on 12-of-18 shooting while scoring from everywhere on the court. The fact that Monty Williams can call his number for a 15-foot jumper with him coming off a screen is astonishing.

He's 101 games into his career and already blurring the line between possibility and reality each time he steps onto the court. A 6'10" do-it-all player who's dominating the league while just beginning to learn his craft. All that potential and nothing but the stars to leap toward.

• The Hook: Cap space is the pit of despair

• Watch LeBron, Wade and the Heat sing karaoke for charity

• Flannery: Kevin Durant has taken over