If Andrew Bynum's basketball career really is over, it's because of his body, not his mind.

Surprise: Andrew Bynum didn't work out in Cleveland. The Cavaliers deemed him such a nuisance to the operation that they're paying him to stay home until they can either trade him or waive him before Jan. 7 to avoid paying the second half of his $12 million salary.

That Bynum's attempt to resuscitate an injury-savaged career didn't pan out hardly registers as a shock. Neither did the immediate reaction by those both inside and outside of the NBA. As one league source told Adrian Wojnarowski of Yahoo! Sports:

About Bynum suspension, league source tells Yahoo: "He doesn't want to play basketball anymore. He never liked it that much in first place."

He doesn't want it bad enough. That's essentially been the chief narrative surrounding Bynum the last two seasons. It was the case when he missed all of last season in Philadelphia, a year in which his last reported injury was sustained while bowling. It was the case even before that as well, as an anonymous former teammate once said: "I’ve never met another player in the league who likes basketball less [than Bynum]."

The Bynum experience was failing

Fear the Sword, from before Bynum's suspension, on how his play was hurting the Cavs.

Fear the Sword runs through some possible options.

The Bynum experience was failing Who might trade for Bynum?

If you know anything about Bynum, the math checks out. As was intricately detailed in Lee Jenkins' 2011 profile in Sports Illustrated, Bynum doesn't just have interests outside of basketball, he has obsessions. He rebuilt and enhanced everything from cars to computers to phones. He's built a remote control car that could go 100 MPH and what was deemed "the George Jetson of computers."

He might be the only player in the NBA who would have preferred a career as a mechanical engineer to one playing basketball, but he never really had a choice. When you're 7-feet tall, coordinated and have soft hands, the game chooses the player as much as the player chooses the game.

Bynum's biggest problem has always been that he's seemed so eager to remind everyone of it. His first reported issues with the Lakers came because he woke up one day and decided he wanted to start taking threes. He was benched for it. When Philadelphia sports fans were working themselves into a frenzy over Bynum sitting out the entirety of last season, he did it while sporting increasingly ridiculous haircuts. After a while, it started to feel like a taunt. It's at the heart of his current suspension, too. An "obviously disinterested Bynum jacking up wild shots at practice" was the straw that broke the camel's back in Cleveland.

Still, Bynum's psyche was never the real part of him that had an adversarial relationship with the game. It was his body. He had his first knee surgery when he was 12 years old, and has had problems ever since. Bynum's skeletal structure wasn't big enough to support his massive frame, and what's followed is a compilation of surgeries, pain and lost games. After he was suspended from the Cavs indefinitely, one Cleveland player said, "It has to be hard for him, to go from being an All-Star to what he is now, that has to be hard to handle." 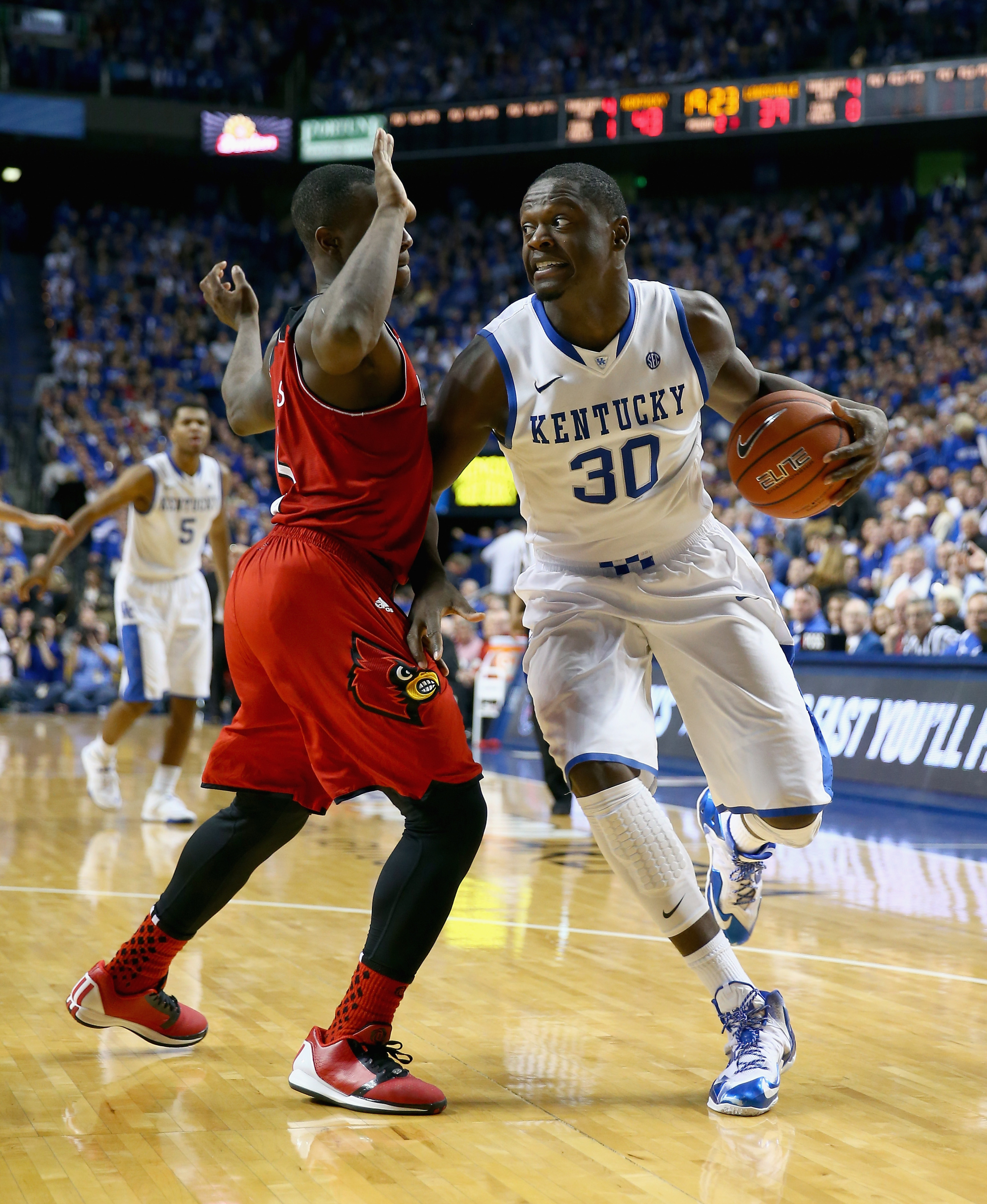 Kentucky's Julius Randle is seen as one of the top prospects in the loaded 2014 draft, but one key measurable throws a lot of doubt on whether his game will translate from college to the pros.

The first part of that, and all the work that went into it, is what gets lost when people talk about Bynum's passion for the game. That passion was robbed from him; it's not like it never existed. His skill level isn't what gave him the opportunity. The skill had to be developed, and it was.

From ages 18-24, Bynum's year-to-year improvements were remarkable. Bynum went from the player who made Kobe Bryant want to leave the Lakers in the summer 2007 to the reason he wanted to stay. A teenaged Bynum was the target of trade speculation in a deal that would have sent Jason Kidd to the Lakers, prompting Bryant to be caught on camera saying, "Andrew Bynum? What the f---?" "Are you kidding me? F------ ship his ass out,". It wasn't the easiest thing for a 19-year-old flung into premature adulthood to hear. But by the time he was 21, Bynum was widely considered the best center in basketball this side of Dwight Howard. There are only 19 players ever to post a PER over 20 four times before turning 25, and he's one of them.

It's not like those were pain-free years, either. Bynum played an entire season with a small tear in his meniscus in 2010 -- a less severe version of the injury that sidelined Russell Westbrook for six months and has Derrick Rose set to miss the season. He even played in the NBA Finals after re-aggravating it. That doesn't sound like the behavior of someone who hates basketball.

What's really difficult is feigning enjoyment out of something that causes your entire body to ache.

What's really difficult is feigning enjoyment out of something that causes your entire body to ache. NBA centers physical anomalies from the rest of mankind, but the internal structure of Bynum's body never caught up with the rest of him. The sideshows that have followed seem more like an extension of the angst that comes from suffering. No one likes being in the hospital or the rehab that comes later, even if you're getting paid millions.

If Bynum has lost his passion for basketball, it's a byproduct of a body that never gave him a fair chance and a system that commodified it at too young an age. Bynum said he was considering retirement even before this season started, but it would take one hell of a person to turn down $6 million for a few months of work. It's hard to blame him if his heart wasn't 100 percent in it.

Another team may think they can around Bynum, but the last two years are starting to feel like a death sentence for his basketball career. It might be for the best, for both the player and the game.

• The Hook: Kobe, Bynum and the death throes of LA's mini-dynasty