How the Toronto Raptors have thrived without Rudy Gay

It's been over a month since Rudy Gay was banished from Toronto, and the Raptors are thriving. What's behind their revival?

Share All sharing options for: How the Toronto Raptors have thrived without Rudy Gay

Trades are a part of the NBA. Team X moves Player Y for Acquisition Z. Sometimes it works out for both sides, sometimes it doesn't.

But sometimes, like the case of the Toronto Raptors and Rudy Gay, it's necessary for team and player to go their separate way. Gay was playing terribly and still had $37 million over two seasons of basketball left to sink the hopes of Raptors fans. General manager Masai Ujiri found an out, however, in the form of a low-impact trade to Sacramento that would cleanse the team of his presence.

Portland's defense isn't very good, but the offense might be so strong that it doesn't matter.

Lo and behold, the Raptors are rolling without their high-priced small forward. They just had a five game winning streak snapped by the Miami Heat after LeBron James and company completed a fourth quarter comeback at home. Overall, the team has gone 10-4 since trading Gay and are playing well. Perhaps too well for Ujiri, who reportedly is still interested in the "long-term" plan for the Raptors, but it's been remarkable nonetheless.

As SB Nation's James Herbert wrote after the team knocked off the visiting New York Knicks:

"You don't worry about someone getting up x amount of shots," Patterson said. "There isn't an immense amount of pressure just on one person. When you move the ball from side to side, you share the ball, it looks beautiful out there. And most importantly, everyone's having fun."

Exiling a player with too high a usage rate, too little of an impact and too many dollars on the balance sheet was a simple decision, though, because Toronto was failing.  Before we can start comparing what's changed for Toronto, we have to know who the Raptors were prior to the transformation. Here's a comparison.

The Raptors were one of the worst passing and shooting teams in the NBA prior to the trade, landing their offense below league average. Their offense has improved across the board since then, to be sure. That said, they've also taken a huge leap defensively, even though their pace is largely unchanged. In other words: they haven't drastically shifted philosophies since moving Gay. They've just done what they do so much better.

This type of boost trickles through the entire roster and isn't just on the shoulders of one player, but when you replace a black hole on offense, it's going to make an immediate impact. Terrence Ross joined Kyle Lowry, DeMar DeRozan, Amir Johnson and Jonas Valanciunas as part of the new Raptors starting five, and the results have been incredible.

What's strange, though, is that the starting five even with Gay was also exceptional ... last year. In fact, it was good enough to be one of the top five "killer" lineups last season, netting a top-three +/- in the NBA. Here's how the three lineups compare:

It was jarring to see the defense allowing 8.9 points per 100 possession more than last season with Gay when the lineup was exactly the same. There was something funky going on that changed the lineup's fortunes

That funky thing was Gay's D. Toronto's perimeter defense suffered during Gay's short stay with the team this season, as the numbers show. Prior to the deal, they allowed the fourth-highest shooting percentage on 16-23-foot jumpers, according to NBA.com. They're holding teams to 37.5 percent from mid-range, the seventh-best percentage in the NBA, since Gay's final game in a Raptors uniform on Dec. 6. It's hard to avoid the conclusion that Gay was slacking on D this year. Defensive statistics are far from perfect, but they do provide statistical context to help confirm what the prior data is pointing toward: 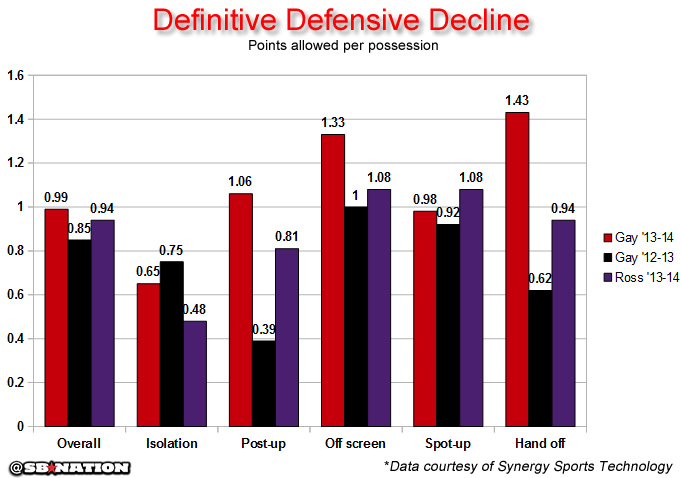 Defense is team based, but it's worth mentioning that Gay's individual defensive numbers, however much stock should be placed in them, regressed from last season. This created a huge problem for Toronto. He was declining on defense and his offense -- the giant elephant in the room that hasn't really been mentioned yet -- was atrocious.  Look no further than Tom Ziller's work that revealed Gay's true shooting percentage was tanking despite his usage rate increasing over the past three seasons.

Gay was averaging a team-high and career-high 18.6 field goals per game with Toronto this season. That was on a career-low 38 percent from the field. To put his shot-chucking into perspective, only five players are currently putting up more shots than Gay was in his final days with the Raptors: Kevin Love, Kevin Durant, Kyrie Irving, Carmelo Anthony and LaMarcus Aldridge. Irving is shooting the lowest percentage in that group, connecting on 42 percent of his shot attempts, but he takes lots of threes and gets to the line, two things Gay doesn't do.

How bad was Gay's shooting? You'd have to go back to the 2003-2004 season to find a player who was putting up at least 18 shots per game while shooting under 40 percent from the field. Jamaal Mashburn, Baron Davis and Allen Iverson accomplished this unflattering feat for the entire season.

And here's how the Raptors look now that they broke away from the hold that Gay had on their offense: 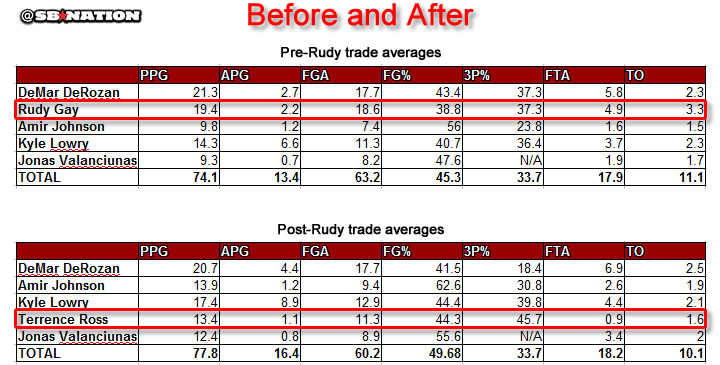 Ross has stepped in and is not only playing better defense, but he's taking less shots at a much higher percentage. This has allowed Lowry to handle the ball more often, creating better shots for his teammates. DeRozan's role with the team remains unchanged, as he's still putting up a ton of shots. Still, this is the same role Gay was filling at a less effective clip. At a much more palatable $9.5 million per year and with potential to keep growing, there was no need to keep Gay around with DeRozan still learning on the job.

Things aren't perfect for Toronto, though. Ujiri is rumored to be dangling Lowry for future assets, and dealing him will certainly hurt Toronto. Valanciunas is still a young frontcourt player who needs time to build on his skillset. Landry Fields is making $6.5 million per year for the next two seasons while falling out of the rotation and shooting 35 percent from the field.

But the team is no longer possessed by the ghost of Rudy Gay, exorcised by by a new front office going in a new direction. The power of stats compel you.