Jesus Shuttlesworth? The Big Ticket? The Heat and Nets are set to wear nickname jerseys when they play Friday.

The Miami Heat and Brooklyn Nets are all set to wear "nickname" jerseys when they play on Jan. 10, and both teams have unveiled the nicknames players have chosen for the game. The Heat have gone the extra mile, creating a "microsite" promoting the "name collection," which you can find here. Here's a few of the notable jerseys that will debut riday: 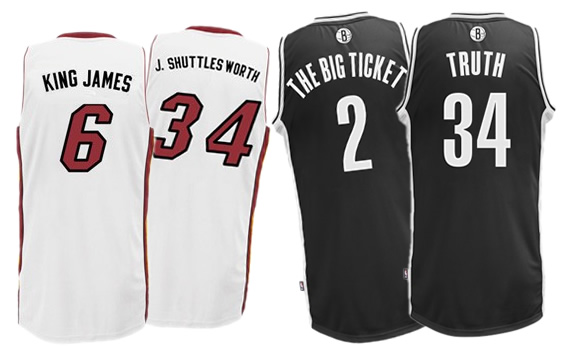 So what names can we expect to see from Miami?

Some of these were expected -- like Kings James, Birdman and Rio, for example. Others are just awesome, like Ray Allen referencing Jesus Shuttlesworth from He Got Game. On the topic of that movie, Spike Lee and Allen have been talking "for months" about making a sequel to He Got Game. A big swing and a miss here? Dwyane Wade, who has gone by plenty of other monikers and somehow settled on D. Wade. What about Flash? What about "Three," the name he gave himself after his third title.

The Nets will feature a few classic nicknames as well but haven't unveiled their full roster:

Joe Johnson - JJ (not to be confused with "JJ" James Johnson)

Both teams will wear the jerseys throughout the season.

• The Hook: When no one is clutch, everyone is