Share All sharing options for: The tallest pro basketball player on Earth is in the NBA D-League

The golden age of extremely tall pro basketball players seems to be over. Like, extremely tall even among the NBA's extremely tall population. In the '90s, several of the tallest people on the planet played in the NBA, and in some cases (Manute Bol, Gheorghe Muresan, Shawn Bradley) rather successfully, but since Yao Ming's retirement, that's no longer true. The NBA's tallest player is Hasheem Thabeet, who stands at a downright shrimpy 7'3. That change could be a combination of several factors — post-Yao realizations that human legs can only propel so much size, the evolution of the game, or even just a dearth of truly gigantic young men.

Anyway, what I mean to get at here is that we've got one. He's not in the NBA and probably won't be, but he's close by. Paul Sturgess — the Guinness-confirmed tallest pro basketball player on Earth — is in the NBA D-League playing for the Texas Legends. Sturgess is 26 years old, hails from England, and stands 7 feet, 7.26 inches tall, but it's customary to round up to 7'8.

Some more things to know about him:

* Sturgess was drafted by the Springfield Armor in 2013, but acquired by the Legends in a trade soon thereafter . He's playing only spot minutes and averaging 0.6 points per game in Texas. 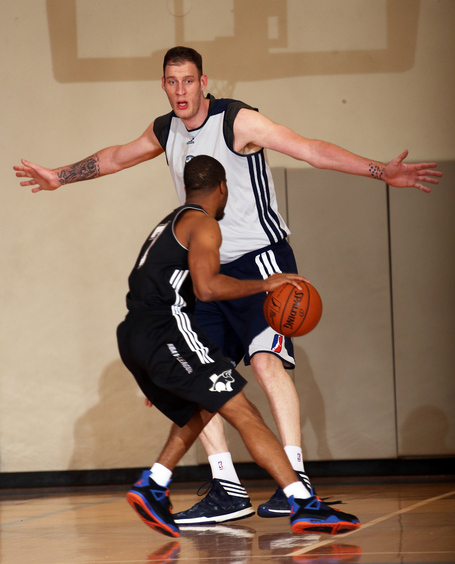 * According to a Sun Times article that I can't access (but here's the Wikipedia page citing it), Sturgess' height isn't the result of a metabolic syndrome, just extreme but healthy growth in a guy with a 6'8 father and 5'5 mother.

- Sturgess bounced around in college, first playing at Florida Tech, then the (since-renamed) Brevard County College in Florida, and finally at the now-defunct Mountain State University in West Virginia. Here's a video from his days at Mountain State:

* Out of college, Sturgess joined the Harlem Globetrotters, where he was teammates with Jonte "Too Tall" Hall, the shortest player in Globetrotter history. Sturgess was known as "Tiny" with the Globetrotters and made a no-jump dunk his signature move:

Because he's a nice guy, that's why.

So, if you long for the days of basketball players towering over other basketball players, I suggest you become a Texas Legends fan immediately. It doesn't seem like Sturgess has much chance — at 26 years old and scant playing time thus far — to advance beyond the D-League, but he's the closest throwback we have right now to the days when true giants roamed the American pro basketball scene.