It's time for the NBA to end conferences

The 14-year-old East-West imbalance is having perverse impacts on the league. It doesn't have to be this way.

Share All sharing options for: It's time for the NBA to end conferences

We are a month into the NBA season and there is one storyline that remains no surprise whatsoever: the Western Conference is far superior to the East. This is nothing new. This is problematic. There is an obvious solution. There is clear evidence that this is not simply cyclical -- that this looks like a permanent issue. It's time for the NBA to fix it.

Before we get to that, here are three charts showing the depths of the West's dominance.

The Great Imbalance is now a teenager. That's right: we're on our 14th year of crazy conference imbalance. This chart shows in-season inter-conference records since 2002. Thanks to Sports-Reference.com for the stats help.

So while this season's 45-19 West record against the East stands out, it's not totally unthinkable. Last year, the West had a 63 percent win percentage against the East, and the West has dominated the East in inter-conference play in 12 of the past 13 seasons.

Good West teams miss the playoffs while bad East teams make it almost every single year. This chart is from a couple years ago -- conference imbalance is a common theme 'round here -- but it's still valid. The No. 9 team in the West -- that is, the best team to miss the playoffs -- is usually better than the No. 8 team in the East, which does make the playoffs. 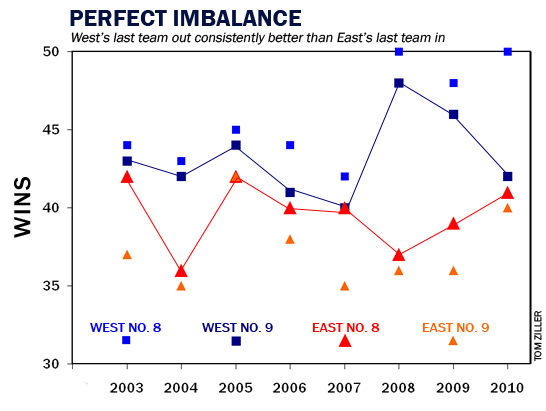 So to recap, the West's best lottery team had a better record than the East's worst playoff team in 10 of the past 12 seasons. On average, the West No. 9 has four more wins than the East No. 8. And remember that none of this takes into account that East teams play more games (52) against the inferior conference than do West teams (30).

This persistent imbalance has a number of effects. As I've noted before, playing in a weaker conference repeatedly hurts East's teams chances of improving by warping the lottery. It hurts the quality of the Eastern Conference playoffs, where there are almost always a couple of sacrificial lambs. It creates perverse incentives for middle-of-the-road West teams to bottom out since making the playoffs is much more tougher than it ought to be. Finally, it makes coming out of the Western Conference playoffs that much tougher than winning the East due to the lack of a first-round free pass in most seasons.

The most obvious, painless solution: end conferences. You can still organize the teams as they are now and the league doesn't need to change the regular season schedule. Teams can still visit teams from the other coast just once. (This could, however, be a gateway to future schedule reform to ease travel, decrease the number of back-to-backs and to generally let players rest more.)

But when the playoffs come around, the NBA should take and seed the 16 best teams regardless of conference. What you lose in intraconference rivalries, you'll make up in better basketball. No offense to the Bucks, but I think we can concede Chicago-Milwaukee in the first round if it gets the Suns into the postseason.

End conferences for the good of the league.

Editor's Note: The first chart originally did not include Oklahoma City. We apologize for the omission.