Two teams that many thought would be in the West's second tier have raced off to hot starts, but neither is quite good enough to unseat the defending champions yet.

The Spurs didn't come galloping out of the gates, but they picked up a strong win over the Dallas Mavericks sans Kawhi Leonard to stay atop our Power Rankings. It's just too early to unseat the champions. Plus, they're trying to get away with starting Austin Daye while Tiago Splitter misses time, which deserves some sort of award.

San Antonio will have to have a better Week 2 or there's a good chance they'll step down from the power ranking throne. There's your one-time "champions" pass.

The $70 million extension given to Klay Thompson looked smart after he poured in a career-high 41 points in his first game since signing the four-year deal. Thompson leads the league in scoring, averaging 29.7 points per game through three games while shooting 45 percent from deep and 53 percent overall. He also hit the go-ahead basket against the Portland Trail Blazers Sunday with a defender draped on him:

The Rockets are off to a great start, winning all three of their games while outscoring their opponents a league-best 14.7 points per 100 possessions, per NBA.com. The problem? They've been beating up on the bottom of the NBA, picking on the Los Angeles Lakers, Utah Jazz and Boston Celtics. Their first big test comes Tues. Nov. 4 when they visit the Heat.

About that Trevor Ariza-Chandler Parsons swap:

Ariza is shredding the net from three-point range, shooting a team-high six attempts from deep per game and hitting 55.6 percent.

Give Rick Carlisle personnel to work with and he'll make great things happen. The Mavericks have the best offense in the NBA, putting up 118.8 points per 100 possessions, according to NBA.com. Six players are averaging double-digit scoring, and Dirk Nowtizki, Ageless Wonder, is averaging 18.7 points on 55.8 percent shooting.

The Heat is showing it is still a relevant team early in the season. Chris Bosh has been the main reason Miami stands as the lone undefeated team in the East after winning its first three contests, including wins over conference rivals Toronto and Washington. Bosh is averaging 25.7 points and 11.3 rebounds, looking good as the leading man of a team once again. The Heat have the second-best offensive rating in the NBA (113.7 points per 100 possessions), and clearly aren't ready to concede the East to anybody.

The Grizzlies are undefeated, Marc Gasol is averaging nearly 29 points while shooting 59 percent from the field and they have the fourth-best defensive efficiency in the NBA. Some things never change. (This includes the obvious problem in Memphis for the last few years: Their offense is bottom-10 in the league.)

The Clippers opened the season 2-0, but unimpressive wins over the injury-riddled Oklahoma City Thunder and Los Angles Lakers left much to be desired. Then, they were stunned by the Kings.

Blake Griffin is having serious struggles from mid-range but is firing away from outside the paint:

LeBron James' homecoming didn't get off to a fairy tale start after a fairy tale summer, but the Cavaliers bounced back the next night and picked up a nice win over the Chicago Bulls. Cleveland should be a very good team, but they're still in a wait-and-prove phase.

In the "strange things are happening under the small sample size" vein, the Bulls' offense is top-10 in the league, but their defense isn't. Chicago, like Cleveland, is a team that has some proving to do, particularly in the long-term health department. Kudos to Derrick Rose for sitting out because of his ankle on Saturday. Hopefully it isn't anything that'll nag him throughout the first portion of the season.

Toronto's lone loss was to the Heat, who has been playing like it has something to prove. DeMar DeRozan is coming out firing this season, averaging 23.7 points, 7.3 rebounds and 3.7 steals per game. Week 2 will be a good measure for the Raptors, who'll have a handful of games they should win with the Thunder, Celtics, Wizards and 76ers on tap. Washington is the big game of the week, but the Wizards have problems of their own right now.

Goran Dragic hasn't made a three-point shot so far this season in three games, but he drained this Halloween prank video.

In surprising news, Isaiah Thomas leads the Suns' trio of point guards with 18.7 points per game. Put his scoring under per-36 terms and he'd be putting up a team-high 28.4 points per game.

You may recall the Wizards' bench was a serious problem last season. That's actually looking worse so far this season:

Washington will get some much-needed help once Bradley Beal returns and clarifies their rotation, but this has been an ongoing problem. Sure, rotations are tight come playoffs, but they have to get through an entire season with these reserves and they need some sort of production out of their sixth, seventh and eighth guys.

Opening week was not a good look for Portland. Their lone win was against a Durant-less Thunder, and they survived Russell Westbrook's scoring explosion. Then, Rudy Gay popped off for 40 in a loss to the Kings, and Klay Thompson went off for 29 two nights later. Portland will have to play better to solidify their playoff spot in a deep conference.

The Knicks were blown to smithereens by the Bulls in their season opener, but put together back-to-back quality wins against LeBron James' Cavaliers and the Hornets since. Carmelo Anthony has drained a pair of daggers early in the season.

Kyle Korver has hit eight of his 10 three-point attempts on the year and the Hawks are currently the top three-point shooting team in the NBA. No, Korver won't shoot 80 percent through the season, but Mike Scott, Jeff Teague and DeMarre Carroll are all shooting at least 40 percent from deep. Partner sharpshooting with Al Horford and Paul Millsap handling inside duties, and the Hawks may have themselves a very good offense this season.

Just when you thought things couldn't get worse, Russell Westbrook is joining Kevin Durant on the shelf for at least a month after fracturing his hand. In the meantime, it'll be interesting to watch how long Perry Jones III, Legitimate NBA Player, lasts. He's averaging 19.3 points per game on .563 true shooting percentage through three games.

It was clear Anthony Davis was on track to be the NBA's next superstar last season. He made opening night his, putting on an amazing 26-point outing with 17 rebounds and NINE blocks to go with it. His next game? Thirty-one points and 15 rebounds.

As for his defense, he's scaring opponents into making mistakes at this point. Look at how he blows up this pick-and-pop play between Chandler Parsons and Jameer Nelson. Davis traps Nelson after Parsons pops out of the screen, but Nelson manages to swing the pass to the corner. Davis immediately recovers, Parsons hesitates in fear of that gigantic wingspan and pumps once. Davis stays on the ground, squares up and easily manages to block the shot after Parsons tries to shoot over the top of him:

The Hornets are going through some growing pains, particularly on offense. Defensively the Hornets are still getting it done, allowing less than 95 points per 100 possessions, but a 91.7 offensive rating is brutal.

Pop quiz time! Who out of Kemba Walker, Lance Stephenson, Gary Neal and Gerald Henderson is shooting less than 35 percent through the first three games? That was a trick question. They all are.

DeMarcus Cousins just thrashed the Clippers, putting on a show with 34 points, 17 rebounds and five assists in a quality win. Their defensive numbers look pretty good after being one of the worst last season, but their offense has really suffered after watching Isaiah Thomas join the Suns. If Boogie can become a two-way center, he could carry Sacramento a long way this year.

Brooklyn had a light schedule, but Joe Johnson put in work against the Pistons, dropping 34 points. He's averaging a team-high 26.5 points while shooting 50 percent. Brook Lopez is back in the Nets' lineup Monday, where he should make an immediate impact.

Balance of power in the West 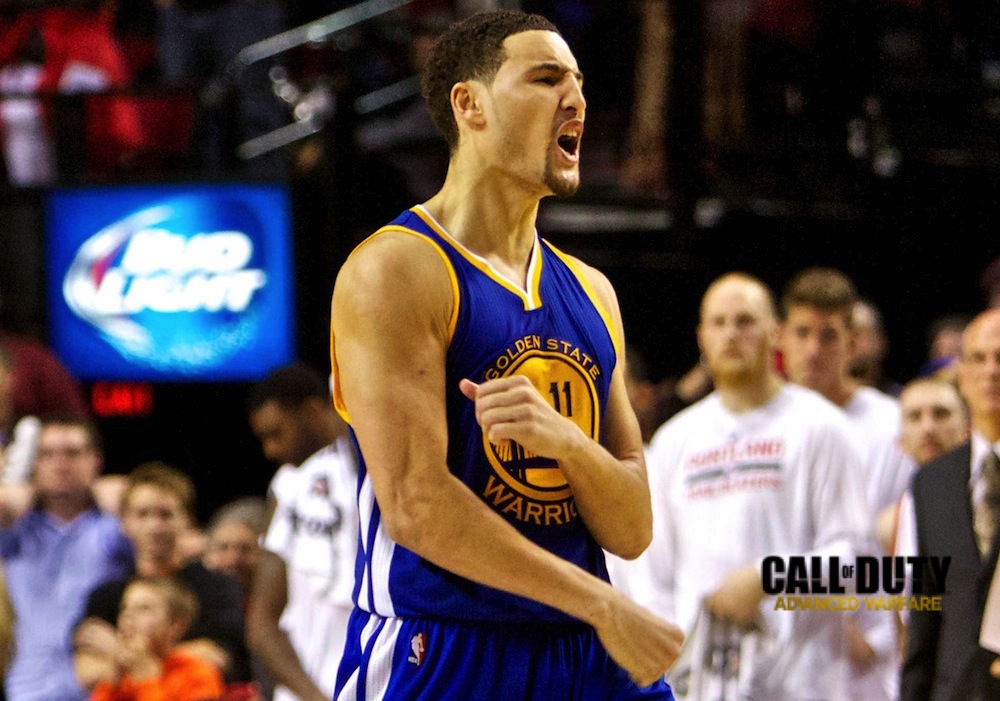 Klay Thompson is now being paid max money, and so far this season, he's been playing like he deserve it. In the already-shaken-up Western Conference, that could mean a new favorite eventually emerging.

The Nuggets are playing horribly on offense, but very good on defense. Still, no matter how good the Nuggets' defense may be, they cannot shoot 26 percent from three-point range and 36 percent overall. Danilo Galinari and Wilson Chandler are taking a high volume of shots while nailing less than 30 percent from the field.

The Jazz have been inching toward a crossroad since this summer and made an important decision when they signed Alec Burks to a four-year, $42 million contract. That's left Enes Kanter in the cold, and he's responded by averaging eight points and 3.7 rebounds while shooting 40 percent from the field. Meanwhile, Burks is hitting 40 percent of his three-point attempts, and their other big man, 23-year-old Derrick Favors, leads the team with 21.7 points per game.

The Pacers have a win, which is something four teams still can't say. But when it comes against the 76ers, does it really count? Indiana is still dealing with injuries across the board. A season ago, who would've guessed Donald Sloan and Chris Copeland would be putting in 30 minutes a game?

The Timberwolves are in a strange place. Their leading scorers are Kevin Martin, Thaddeus Young and Nikola Pekovic. Their franchise point guard, Ricky Rubio, is shooting 37 percent from the field, which happens to be the same percentage Andrew Wiggins is shooting from the field. Meanwhile, the Anthony Bennett redemption season is in full swing. Small sample size, sure, but who doesn't like a free sample?

This has suddenly become a very important year for Brandon Knight and the Bucks. Milwaukee couldn't work out an extensions with their starting point guard, and he'll be headed toward restricted free agency next summer. The stage is now his to earn his next payday, and he's averaging 19.7 points and nine assists while shooting 50 percent from deep to start the year.

Their historical rival in the Lakers may suffer from not taking enough threes, but the Celtics are shooting the worst three-point percentage in the NBA, connecting on just 19.1 percent of their attempts from beyond the arc. Jeff Green is putting up a team-high five threes a game at a 30 percent clip, while rookie Marcus Smart is right behind him at 4.5 attempts from deep while shooting a dismal 11.1 percent.

Congratulations, Orlando Magic! You're the top-ranked team without a win! Here's a ribbon to Elfrid Payton for a solid 16-point, nine assist line in his third NBA game.

Someone get Greg Monroe a nice cool glass of lemonade. He dropped 18 points and 11 rebounds while shooting 58 percent in his first game, but the Pistons' offense is averaging a horrific 91.7 points per 100 possessions. Perhaps it's time to have a talk with Kentavious Caldwell-Pope, who's putting up 14 field goal attempts per game while shooting 26.2 percent from the field. Caldwell-Pope's shot quantity is second only to Josh Smith, who's averaging 17.7 attempts on 37.7 percent shooting.

The Lakers are dead-last in defensive efficiency, allowing 120.2 points per 100 possessions, per NBA.com. They've lost four straight games to open the season for the first time since 1957. Still, Kobe Bryant is doing ridiculous things, so they'll just edge out being last.

No cheating: Name five players on this roster.

The 76ers have the worst offense in the NBA at 89.5 points per 100 possessions, and the Sam Hinkie tank machine has started strong this season. No. 1 in Power Tankings, No. 30 in Power Rankings.

Own Activision's Call of Duty: Advanced Warfare on XBOX One, XBOX 360, Playstation 4 and Microsoft Windows, Nov. 4.