The Magic guard was once an unheralded college backup. Through hard work, he's become one of the pillars of Orlando's rebuilding effort.

Victor Oladipo was working out, which was not unusual. In less than three years at Indiana University, he had progressed from a raw but intriguing athlete to a possible lottery pick through countless hours of drills with assistant coach Seth Cooper. But he was struggling with a sprained ankle he suffered against Purdue and he wasn't sure he was going to be able to play against Michigan State.

Toward the end of his workout, his phone started blowing up. Someone had just compared him to Michael Jordan. He looked at Cooper and simply said, "Wow." Oladipo went out that night and scored 19 points and grabbed nine rebounds with five steals in a win over the Spartans.

"He used to tell me, ‘Seth, I don't know what I'm going to do if I don't make it,'" Cooper said. "He had that chip on his shoulder, but also he was so determined to work and not leave anything uncovered."

Oladipo had made a point of staying late in the gym from the moment he arrived in Bloomington. It began with shooting drills for a half-hour every day after practice and then he started mixing in evening workouts as well. It progressed to the point where Cooper would pack cones for road trips so Oladipo could get in extra ballhandling drills after shootarounds.

He was a role player as a freshman and a starter as a sophomore whose athleticism, wingspan and disruptive defense put him on the NBA radar, but there was still much more to be done. His skills were raw and his shot was inconsistent. IU players typically were given a month off after classes were over in the summer and another month before the new semester began, but Oladipo stayed on campus and continued to work out with Cooper before his junior season.

"Once he started seeing some of the results, it became an addiction," said Cooper, who is now the lead assistant with the Maine Red Claws in the NBA D-League. "First it was just making more shots and it was just him and myself in the gym. Then it carried over to making shots in pickup games and you could see his eyes getting big. He just wanted to do it more and more."

It wasn't long before Oladipo became a phenomenon. His scoring average almost doubled between his freshman and junior seasons and his shooting percentage skyrocketed to almost 60 percent.

"With him it was such a national thing," Cooper said. "At the beginning of the year, you'd read guys and they didn't think it was real. When he started getting all that recognition, he'd stay after practice an hour and a half and work out." 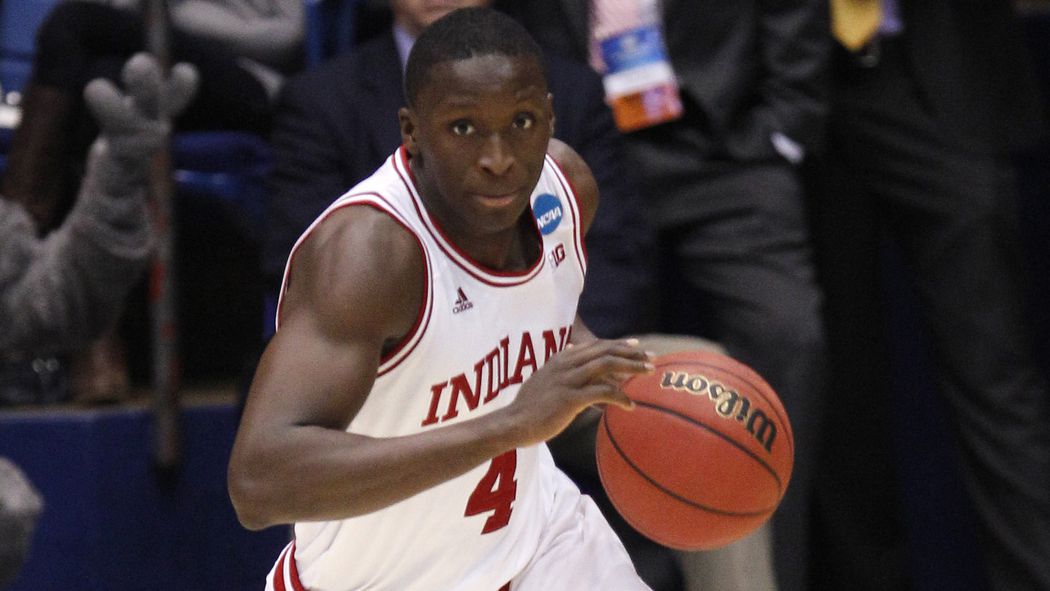 A few months later, the Orlando Magic made him the second pick in the draft despite lacking an obvious position. He wasn't really a point guard and he wasn't simply a wing, but none of that really mattered. Suddenly the intriguing prospect was a cornerstone of the Magic's rebuilding effort.

"Everybody talks about hard work, but there are certain guys that take it to a different level and you can see it in the game," said Brad Stevens, who has coached against him in college and the pros. "You can see it with his ballhandling. He takes big shots. He's never been scared. That's been a big part of who he is and I've always been a fan of his."

Once Oladipo reached the NBA, the hard work was just beginning. The Magic put the ball in his hands right away and asked him to be more of a playmaker. Not surprisingly, there has been a steep learning curve. He was overwhelmed on some nights, like most rookies, but he was also unstoppable on others. The Magic don't want to put labels on him. They just want him to continue to find his game.

"I've never compared him to another player," Orlando coach Jacque Vaughn said. "We're not comparing him to other players in other organizations. I want him to play with the ability that God has given him. He has a great ability to be athletic, to get to the rim. I think he'll only get better."

As Oladipo learned the offensive nuances of the NBA game, he's also had to learn the defensive side. He has the talent and enormous wingspan to become a lockdown defender at multiple positions, but NBA defense is about a lot more than natural skill.

"System-wise, there are fourth-year guys still learning the system of doing the right thing over and over again," Vaughn said. "He has the ability that if you roll the basketball out and I pick one guy off our squad and I say, ‘You need to stop this guy for one possession,' he's one of the guys I'm going to think of immediately. That has a huge impact on today's game."

The Magic can afford to be patient with Oladipo because they are deep into one of the most patient rebuilds in the league. When general manager Rob Hennigan took over in 2012, one of his first tasks was trading Dwight Howard, which he did for a package of players and picks led by emerging center Nikola Vucevic. The next year he tabbed Oladipo with his first lottery pick and he then added Aaron Gordon and Elfrid Payton in the following draft.

In his two and a half years on the job, Hennigan has drafted or traded for 10 players who entered the league in 2011 or later including Tobias Harris, Evan Fournier, Maurice Harkless and Kyle O'Quinn. The core is just starting to take shape but it stands to reason that Oladipo will be an important part of it for years to come.

"Extremely talented," veteran forward Channing Frye said. "We've seen just a glimpse of what he can be. We're trying to build this team around him and he's a pretty good piece. He wants to get better. I think he's never satisfied. That's a big part of who he is. He's extremely competitive and he wants to win the right way. For us to be successful, he's got to continue to grow and we're going to grow with him."

The Magic don't want to put labels on him. They just want him to continue to find his game.

Over the summer, Oladipo continued to put in time in the gym and Vaughn said he was one of the team's best players in training camp. Then he sprained a ligament in his knee and suffered a facial fracture right when he was ready to return.

"It was really frustrating," Oladipo said. "It just seemed like it was one thing after another. I sprained my MCL and then when I was ready to come back I cracked my face."

Finally healthy, his game has begun to take shape. He's raised his shooting percentages all over the court, especially from behind the arc where he's making 43 percent of his shots. He's at his best when he's working downhill in the pick-and-roll and allowed to attack the basket.

"For him, it's kind of a Catch-22," Frye said. "You don't want him to change how he got here or who he is as a player. At the same time he has the capability to get anywhere he wants on the floor. He has the ability to create for others. It's a little salt, a little sugar trying to figure out when it's time to be aggressive and when it's time to pass and get other teammates ready. We don't need him to be (Rajon) Rondo. We need him to be Vic."

Oladipo remains a work in progress. His turnovers are a constant source of concern and he's learning to play off the ball when Payton is in the lineup. Yet, he's still only 22 years old and he's nowhere near the kind of player he envisions in the future.

"I have more expectations of myself than (anyone else), more than they can even imagine," Oladipo said. "I feel like if I continue to work hard, everything else will take care of itself."