The Thunder and Pacers are still the top two teams in the latest power rankings despite both suffering tough losses to the Magic. Meanwhile, the Clippers are looking good with the return of Chris Paul.

The Thunder had a slight hiccup against the Magic juggernaut (wait, what?), but Kevin Durant and Co. bounced back with a strong outing against the Knicks. Durant came just an assist shy of a triple-double, badly outplaying Carmelo Anthony in the process:

The Pacers also suffered a loss to the Magic (seriously, what?), but prior to that, they had won four straight games, including a thrilling overtime victory over the Trail Blazers. With Paul George struggling, George Hill poured in a career-high 37 points and forced overtime with a huge three:

Continuing with the theme of bizarre losses, the Heat played one of their worst games of the season in a 94-89 loss to the Jazz. But while that performance was mostly bad, the win several nights before against the Clippers was brilliant and full of highlight-reel plays like this:

The Clippers got Chris Paul back and did bad, bad things to the poor 76ers. I mean, don't do 'em like this Blake Griffin:

The Rockets are on a roll right now, winners of five straight. Dwight Howard might not be averaging 28 and 15 like Shaq wants, but Howard is averaging 26.2 points and 10.8 rebounds during the winning streak.

Since moving a season-high 22 games over .500 a few weeks ago, the Blazers have gone just 5-6. A big reason is a really tough schedule, but the struggles may not bode well for the postseason. Or perhaps it's just a lull.

Despite a depleted roster, the Spurs had a rather productive week, going 3-1 on the start of their nine-game Rodeo Road Trip. The hero in the last victory was Patty Mills, who scored a season-high 32 points in a win over the Bobcats.

The Mavs just might be the hottest team in the NBA right now, winners of five straight games and four in a row by double digits. The most impressive win during the streak came in Memphis, where the Mavs dropped 110 points on the Grizzlies.

Bizarre note from this season: the Suns handled the Pacers twice, but they looked miserable against the Bulls in two losses. Just strange.

The Warriors have been puttering about the last few weeks, unable to find any real consistency. There have been some really impressive victories, but there have also been some bad losses. Case in point: a 91-75 debacle at home against the Bobcats.

The Grizzlies cracked the top five in the last power rankings and promptly lost three of four games last week. Memphis now sits 2.5 games out of the final playoff spot in the West and patiently awaits the returns of Mike Conley and Tony Allen from injury.

After beating the Thunder and Blazers consecutively, the Wizards moved over .500 for the first time in four years. The response? Failing to hold a big lead against the Spurs and a tough loss against the reeling Cavaliers. Washington is back at .500 after a win over Sacramento, but the team easily could be four over at this point.

The Bulls are the lowest-scoring team in the NBA and third-worst when it comes to offensive efficiency. And yet, they sit just a game behind the third-seeded Raptors. The East!

The Hawks' injuries may finally be starting to catch up to them. Atlanta has lost three in a row, with a three-game roadie against three East playoff teams staring the Hawks in the face. At least Kyle Korver still has his three-point streak going.

After a three-game stumble, the Nets responded with a strong 3-1 week. To cap off the week, Mason Plumlee somehow matched and arguably outperformed Anthony Davis in a win over the Pelicans:

The Nuggets have been battered by major injuries this season. Both Danilo Gallinari and Nate Robinson will miss the year with ACL injuries, while JaVale McGee's broken leg could keep him out the rest of the season. Ty Lawson also just suffered an injury, breaking a rib in a loss to the Pistons.

The Brow may not have been selected by the coaches to represent the West in the All-Star Game, but the NBA got it right by naming him the replacement for the injured Kobe Bryant. Davis has had a phenomenal second season and is better than a good portion of the East squad.

Want to know a big reason why the Wolves are three games under .500 despite a net rating that places them 12th in the NBA? Dreadful fourth-quarter play. Minnesota goes from one of the league's best teams in the first three quarters to one of the worst in the fourth, sporting a -10.4 net rating in the final frame, according to NBA.com's stats page.

The Bobcats are tenuously holding on to that final playoff spot in the East, holding just a half-game lead over the Pistons. Charlotte blew a prime opportunity to beat San Antonio at home, giving up 63 points in the second half to a depleted Spurs squad.

The Knicks' defense has been bad all season and was in prime form on Sunday in Oklahoma City. Wide-open threes, botched rotations, poor switching and no rim protection was the name of the game, with things reaching embarrassing levels on several occasions.

All hail the Magic! Orlando, who has looked like one of the NBA's worst teams for quite some time now, just beat the top two teams in these power rankings. Consecutively. I'm as stunned as you are:

Jared Sullinger struggled in a loss to the Mavs on Sunday, but he had himself quite the stretch during a three-game winning streak. Sully averaged 23.7 points and 12.7 boards during the streak.

A rather strange week for the Jazz. Two straight blowout losses ... followed by an inexplicable win over the Heat. In the win, Utah held LeBron James to just 13 points, tying a season-low for the reigning two-time MVP.

The Cavs hit absolute rock bottom, losing to a Lakers team that was forced to play a fouled-out Robert Sacre because there were no other available players. That debacle led to the firing of general manager Chris Grant, and Cleveland has responded with two straight wins. Dion Waiters did this to cap off the last win:

The Kings showed signs of breaking out of their slump last week, destroying the Bulls and then beating the Raptors. But that was followed up by two poor offensive performances in consecutive losses against the Celtics and Wizards. Disappointing.

If there's one image to sum up the Lakers' season, it's this one (via Larry Brown Sports): 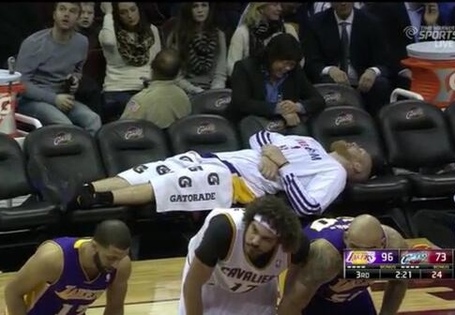 The Bucks still have the NBA's worst record and it's not really close, but they're spared the last spot thanks to the exceptional ineptitude of the 76ers. Enjoy the 29th spot, Milwaukee!

TANK MODE: FULLY ENGAGED! The Sixers have lost six games in a row, with an impressively awful performance against the Clippers on Sunday capping off a terrible week. Philly shot 27 percent overall and 3-of-28 from three in an epic 45-point loss.