Dirk Nowitzki missed the All-Star game for the first time in over a decade last season, but has turned in a brilliant bounce-back season that continues to fly under the radar.

Share All sharing options for: Dirk Nowitzki, the ageless wonder

The old guard of the NBA is at war with Father Time right now. Kobe Bryant has played a total of six games. Steve Nash is 40 years old and looked like he was set to star in "Cast Away 2" when he returned from physical therapy in Vancouver. Tim Duncan ... well, he's Tim Duncan. Allen Iverson officially retired after unofficially being out of sight and mind for years. Tracy McGrady is considering a stint in baseball.

Dirk Nowitzki? He'll be rocking a Western Conference All-Star jersey for the 12th time in his career.

This is clockwork for Dirk Nowitzki.

There's no shame in selfishly cherishing another run with the one-legged fadeaway assassin, either. He's having an incredible season, raising a very incomplete Dallas Mavericks roster to playoff contention in the deep Western Conference. The new blood of the NBA will have plenty of time to collect All-Star accolades. Why not appreciate one of the most unique and talented players to play in the league over the last decade?

Dirk is key in everything that Dallas establishes on offense. He leads the Mavericks in field-goal attempts and scoring even after the team signed Monta Ellis over the summer. His impact on the Mavericks indicates just how important he is as they cling onto their hopes of making the playoffs this season.

Nowitzki yields the largest on/off point differential with an 11.5 point swing. The team has a huge spike in offensive efficiency, averaging 4.5 points more per 100 possessions while their franchise big man is in the game. Dallas has improved from last year as a team on offense, but Dirk has the offense close to championship form. He's just 1.1 points per 100 possessions shy of matching his on-court offensive rating from the team's championship run.

More on Dirk and the Mavs: Mavs Moneyball

Rick Carlisle has long staggered Nowitzki's minutes to keep him fresh and because Dirk thrives with any combination of players. All two-man lineups that include Nowitzki have a positive net rating, except for the seldom-used Dirk/Wayne Ellington duo, according to NBA.com. He's the ultimate plug-and-play weapon, patching up major holes that would otherwise exist if he was only used with fellow starters.

All this is happening after a poor 2012-13 campaign by Nowitzki's standards. He averaged less than 20 points for the first time since his sophomore season after undergoing knee surgery in October and missed a total of 29 games.

Now, he's the only 30-or-older player averaging at least 20 points per game. That sweet mid-range jumper, the swish of the net and the hung head of the defender assigned to stop a living legend are back in action. 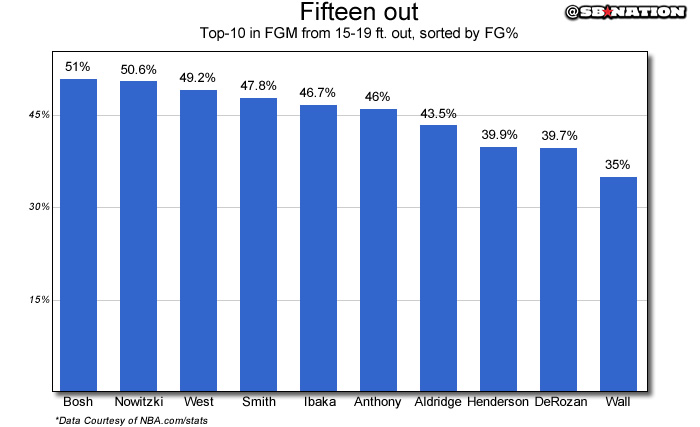 Nowitzki has made the second-most field goals in the NBA from 15-19 while shooting just over 50 percent. He's behind only LaMarcus Aldridge in made shots and just .4 percent behind Chris Bosh for the highest field-goal percentage out of the top-10. Age may slow down players, but Nowitzki's ability to create separation and shoot over defenders is timeless.

He's producing at an elite level and proving why he's been the NBA's stalwart stretch big man for over a decade. He's shooting the third-highest field goal percentage of his career while connecting on more than 40 percent from three-point range for just the third time. Completing his second 50-40-90 season is within reach — he's just .09 field goal percent away currently. 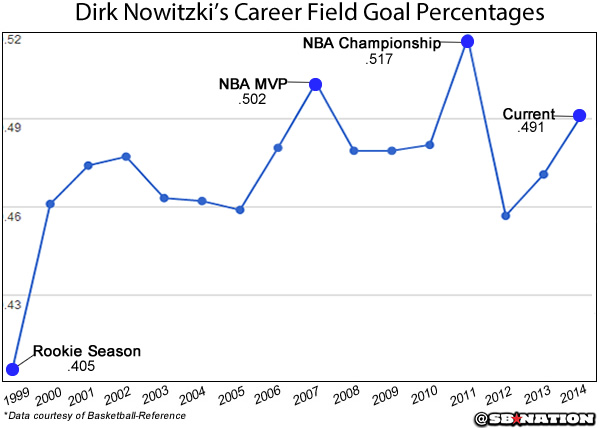 One of the reason's he's able to score efficiently is because he can adjust how he attacks the defense. "He can score from anywhere on the floor," probably ranks at the top of the cliche's used to describe Dirk's excellence, but it's for good reason. The Mavericks can rely on him to create in isolation, back down his defender, be a pick-and-pop partner for their backcourt or simply be ready to catch and shoot when the defense leaves him space.

Counter one aspect of Dirk in the Mavericks' offense and they'll lean on another. He's not able to storm the rim in transition like fellow (and first-time) All-Star Anthony Davis, but his versatile skill set still makes him one of the NBA's best pocket knives on offense. 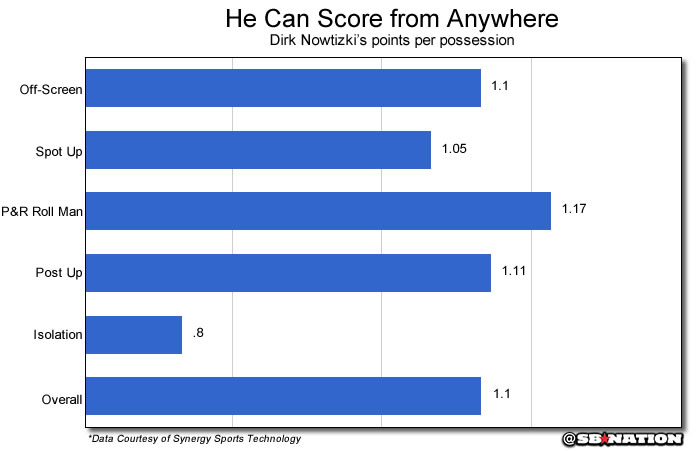 Dirk has scored over 26,000 points in his career, good enough to put him in the top-15 in NBA history. If this bounce-back season is any indication, he'll be climbing the list for a few more seasons after his contract expires this summer.

Father Time is undefeated, so there will be a time when Dirk's sweet jumper goes sour. But the way he's come back in full force after one of the worst seasons of his career earned him the right to represent the Western Conference in New Orleans. And given Dirk's age and the state of the Mavericks' roster, we should be appreciating his 2013-14 campaign more than we are.