The city where he won a national championship and became the first pick overall will be where Anthony Davis makes his NBA All-Star debut.

Share All sharing options for: NBA All-Star Weekend is another New Orleans spotlight for Anthony Davis

TORONTO -- Not even two years ago at the Superdome in New Orleans, freshman Anthony Davis led Kentucky to a victory over Louisville in the biggest game of his life and yelled, "This is my stage." Days later, his team disposed of Kansas in the championship game, and the skinny, shot-swatting big man was named the Most Outstanding Player of the Final Four.

As soon as the New Orleans Hornets won the 2012 NBA Draft lottery, it was obvious Davis would be making many more memories in the Big Easy. ESPN had a crew in Lexington for his reaction.

"It's like karma," Davis said. "I won a national championship there, so that's always exciting. I just can't wait to get down there if I get drafted No. 1."

Of course, there was never any if. You didn't have to be a Ken Pomeroy or John Hollinger to know Davis could be a franchise player. What's remarkable is that, at 20 years old, he's already playing like one.

This season, the Hornets became the Pelicans, and that skinny freshman turned into a force every bit as feared as when he dominated in college. He'll represent the home city in the All-Star Game this weekend, springing around the same court on which he's been starring nightly. The lights that will shine on his stage will be brighter than they've been since that Final Four. 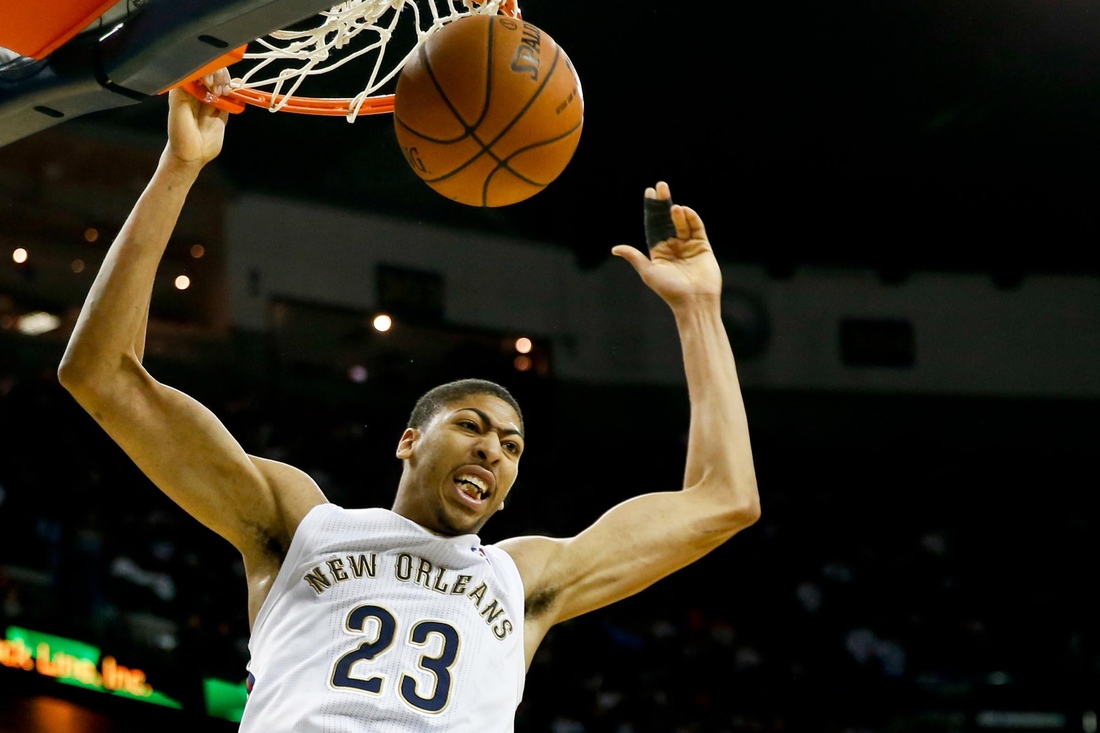 Last March, New Orleans head coach Monty Williams told NBA.com that his team's No. 1 pick was not the league's best rookie. Davis had "played well," Williams said, but "[Portland Trail Blazers point guard Damian] Lillard's played like an All-Star." Lillard put up huge numbers and led the league in minutes, going on to win Rookie of the Year unanimously, while Davis averaged 13.5 points, 8.2 rebounds, and 1.8 blocks in 29 minutes per game. He was solid, but he was hampered by a variety of injuries. He also sometimes felt the pressure of being the No. 1 pick.

"He'd have an off-game and he'd be thinking about it a lot," teammate Ryan Anderson said.

Before Davis had even been drafted, former NBA and current SMU head coach Larry Brown fed the hype machine, telling ESPN The Magazine, "The team that gets him is gonna win over 50 games." The Hornets went 27-55.

But Davis' relative lack of impact undersold the fact that he improved as the season went on and he regularly made plays that screamed future superstar. He just needed to put on some weight and be more decisive, more assertive.

In the summer after his rookie year, Davis headed to Las Vegas. First, he worked out with the Pelicans' training staff during summer league, then he attended USA Basketball's mini-camp, the only one there who had played in the Olympics a year earlier.

"Oh, man," Toronto Raptors swingman DeMar DeRozan said, shaking his head as he remembered the confidence and skills Davis displayed in Vegas compared to a few months earlier. "He was amazing."

The Pelicans' forward was raising eyebrows (get it?) very quickly this season.

The NBA's next superstar

Davis is already here The NBA's next superstar

The buzz started building about Davis' increased strength during training camp, and as soon as the season started, it was clear he was a different player. Davis is averaging 20.5 points, 10.1 rebounds and a league-leading 3.1 blocks per game in his second year, and only four players have a higher PER. Whoever drafted him in your fantasy pool is probably winning it.

Davis' growth into an All-Star has happened "like that," New Orleans guard Austin Rivers said, snapping his fingers.

"It's crazy," Rivers said. "There will be nights where it's the third or fourth quarter and we're like, ‘Man, AD's struggling tonight.' And then I look up and he has like 18, 12 and 12. We're like, goodness, never mind, he's having a great game. He's a monster."

Davis has yet to actually record a triple-double in the NBA, but in late January, he went for 22 points, 19 rebounds and seven blocks against Orlando. Two days later he put up 30 points, seven rebounds and eight blocks in Cleveland. Those dumbfounding numbers don't even capture how opposing players avoid the paint when he's inside or how he routinely recovers rebounds out of his area.

Almost every game, Davis does something that looks impossible. Last Sunday in Brooklyn, Davis found himself matched up with Nets point guard Deron Williams, who hit the big man with his patented right-to-left crossover dribble. It worked as it usually does, creating enough space for Williams to get his shot off against just about anyone else on the planet. Not Davis, though. He recovered, blocking the shot with his left hand. Four seconds later, Davis dunked it on the other end.

"He's just so long and so athletic and jumps so high, it's not human," said New Orleans center Jeff Withey, who battled him for boards at the Superdome as a member of the losing Jayhawks. Even Pelicans forward Darius Miller, who shared that Wildcats national championship with Davis, is still in awe.

"He still surprises me all the time," Miller said.

Davis has made waves nationally with those highlights and stats, but those who spend the most time with him have seen another recent development.

"It's translating off the court even more," Rivers said. "He asserts himself as a leader. He'll get on guys if they're late, guys who are like five years older than him. He'll be like, ‘Hey, you need to be on time.' That's just the respect, and people will be like, ‘Hey, he's right.' Because on the court he does everything for us, so you have to respect him."

In New Orleans, Davis is the one yelling, "Team on three!" when the Pelicans huddle up before and after practice. Last week, he organized a screening of "RoboCop" for the team. He's quiet and composed by nature, but he'll take teammates out to dinner and have no problem holding them accountable the next day when they get to work. If they aren't doing a drill as hard as they can, Davis will stop it and make them do it again.

"I just kind of fell in that position," Davis said. "I like to win, everybody else likes to win, so somebody has gotta be out there and take the lead. I decided to do it."

Trust is always important between a coach and his leader, and if Davis goes to Williams with something he's seeing on the floor, Williams instructs him to tell the team.

Williams believes the great players want to be coached, so he is demanding of Davis. "I'm hard on everybody except my wife," he said, adding that Davis' next step is perfecting his counter moves and reading defenses better. At his age, there is plenty of time.

"He's an All-Star, yet he's in a really cool position to be in," Williams said. "It doesn't bode well for his opponents going forward, but he's gotta put the work in and that's what he's been able to do."

What Davis will be able to do down the road is scarier than the Pelicans' now-banished mascot. "He reminds me of a young Kevin Garnett," Raptors head coach Dwane Casey said, though Garnett doesn't have Davis' dimensions.

Davis himself said doesn't like to look ahead, but that won't stop the fans in New Orleans from doing just that. He's the face of the franchise right now, and the Pelicans are enamored with the possibilities.

• The ballad of Pierre the Pelican | #Lookit