The NBA can't get enough concerts. Good thing, but the intro performance led by Pharrell was excellent.

Pharrell Williams brought in the NBA All-Stars on Sunday night and brought down the house. Playing a medley from his incredible catalog, he had help from rappers Nelly, Snoop Lion, Diddy and Busta Rhymes. And yes, Busta Rhymes and Diddy participated in a choreographed dance to "Happy."

Pharrell also wore his infamous hat for a bit. 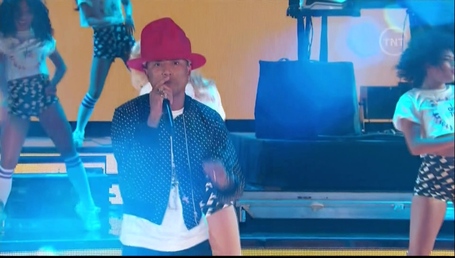 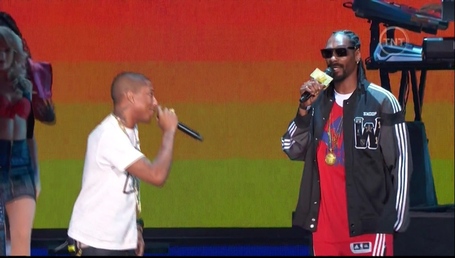 Pharrell also reunited with Chad Hugo, the other half of N.E.R.D., the pair's now-defunct band and production team. While Pharrell has become one of the biggest stars in music, Hugo has basically disappeared. Having him on stage was a pretty nice touch for N.E.R.D. fans.

After a rather long set by Pharrell and Friends -- which included the rather tame intro of the All-Stars, most of whom did not dance -- Canadian singer Serena Ryder performed a powerful rendition of "O Canada," followed by bluesman Gary Clark Jr.'s Hendrixian guitar performance of "The Star-Spangled Banner." The actual All-Star Game tipped off about an hour into the broadcast on TNT, though few have reason to complain after a terrific show.