There was little change in the top 10 as the second half of the year is set to get underway after an exciting All-Star Weekend.

It's a testament to Kevin Durant's greatness that the Thunder hold the NBA's best record at the All-Star break despite Russell Westbrook missing a good chunk of the season. Speaking of Westbrook, he's reportedly planning to make his return to the Thunder lineup this week.

While the Pacers still hold the best record in the East, Paul George is mired in a major slump. George is shooting just 35.3 percent in February, and he also ended January on a very poor note. If Indiana is going to make a championship run, George needs to find his stroke from the beginning of the year.

Yeah, so LeBron James isn't relinquishing his MVP crown without a fight:

Chris Paul is back, Blake Griffin is killing it and the Clippers look like title contenders. In a 122-117 win over the Blazers, Griffin bested LaMarcus Aldridge in a battle of All-Star power forwards, scoring 36 points and grabbing 10 rebounds.

The Rockets are the hottest team in the league, winners of seven straight. James Harden kept that streak alive with a last-second game-winning bucket against Washington:

The Spurs' week wasn't all that notable, but Marco Belinelli certainly enjoyed his trip to New Orleans, winning the 2014 Three-Point Contest:

The Blazers have started to show some real chinks in their armor, losing six of nine heading into the break. With the Clippers and Rockets surging, Portland has dropped to fifth in the West. On a more positive note, Damian Lillard teamed up with Trey Burke to win the Skills Competition at All-Star Weekend:

The Mavs had quite the bi-polar week. Dallas suffered their worst loss of the season in Charlotte on Tuesday, then proceeded to beat the Pacers in Indiana. At any rate, the first half of the year has been a wild success.

The Suns played just one game last week, and although it was a six-point loss to the Heat, it was competitive throughout and Phoenix actually led going into the fourth quarter. While the loss was disappointing, it's hard to be anything but impressed by this Suns group this season.

Like the Suns, the Warriors fell victim to the destruction of LeBron. Nothing to be ashamed about, although Golden State has to feel a little bummed about their current standing in the West.

The Grizzlies received a huge injury scare when Marc Gasol appeared to aggravate the knee injury that kept him out for two months earlier in the year. Luckily, an MRI showed no structural damage, keeping Memphis' playoff hopes alive.

After a short lull, the Raptors entered the All-Star Game on a high note thanks to two straight impressive victories. All-Star DeMar DeRozan capped off his strong first half of the year with a 31-point effort against the stumbling Hawks.

The Bulls just keep on grinding. No Derrick Rose. Luol Deng traded. And yet, Chicago sits just a game behind Toronto for the No. 3 seed in the East.

The Wizards lost two tough games in Memphis and Houston, but at least Bradley Beal and John Wall acquitted themselves rather nicely at All-Star Weekend. Beal was the runner-up in the Three-Point Contest and Wall was the Dunker of the Night in the revamped Slam Dunk Contest:

It was a disappointing first half of the season for the Timberwolves, who were expected to be playoff contenders this year. As it stands, it would take a crazy hot streak and some help to sneak in. Let the Kevin Love Watch begin?

Considering where the Nets were a few months ago, being three games under at the break is a huge success. Brooklyn was a league laughingstock, but now they're poised to have a good chance at winning a playoff series. That wouldn't exactly be reaching the lofty goals heading into the year, but it would at least be better than the embarrassment the year was shaping up to be.

Injuries have ravaged the Pelicans this season, but at least they've rebounded after a really woeful stretch. The playoffs are likely out of the question, however, the strides made by Anthony Davis means the future is very bright in New Orleans. Also, new Pierre!:

The Hawks managed to stay afloat without Al Horford for a bit, but now they're simply floundering. Five straight losses featuring some woeful offense, and it's looking like Atlanta will finish in the bottom half of the East if things don't turn around soon. 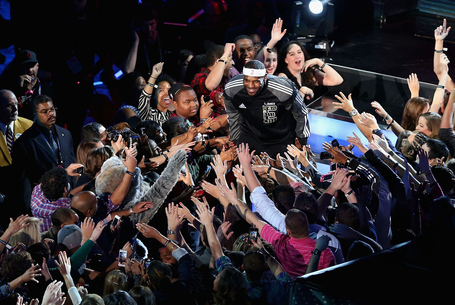 The Nuggets are another team in the midst of a collapse. Denver has lost four straight games and are seeing any playoff hopes slip-sliding away.

The Bobcats have been a nice surprise under Steve Clifford, with their defense making major strides from disasters of years past. It should be an interesting battle for those last spots in the East.

Just a short time ago, the Cavs hit rock bottom. Now things are looking up. Four wins in a row, and Kyrie Irving was named All-Star Game MVP. All hope isn't lost:

It has been quite the rocky road for the Pistons, who recently fired Maurice Cheeks thanks to a disappointing start. Despite the troubles, a playoff berth remains in play.

The Jazz have won three games in a row for the first time all season, and they've basically been playing .500 ball since starting the year a dreadful 1-14. Not too shabby.

Outside of a few impressive wins, the first half of the year was simply a disaster for the Knicks. Mike Woodson is walking on thin ice, and if things don't improve quickly, it's hard to imagine him surviving the year.

The Magic may not be all that good, but they've shown some promise in February and have some nice young pieces to be excited about.

The trade deadline is fast approaching, so it will be intriguing to see if Rajon Rondo actually gets moved. Rondo has looked much more like his old self in the past few games.

The first half of the year didn't go as planned in Sacramento, but don't worry about that because JIMMER!:

Let's just say it has been a rough year for the purple and gold. No Kobe Bryant for most of the season. Injuries galore to other players. But with a likely high draft pick in the 2014 draft, things could be worse.

That long-term extension for Larry Sanders isn't looking too hot at the moment. After missing the first two months of the year due to a thumb injury suffered in a bar fight, Sanders is set to miss at least six weeks because of an eye injury. Woof.

As the Sixers lost their second straight game by 40-plus points, it was fun to remember that they started the year 3-0. Like, that actually happened. Now they're giving up career games to Marreese Speights.