A weak draft class still needs a Rookie of the Year. Let's break down the candidates.

Share All sharing options for: Breaking down candidates for the 2014 NBA Rookie of the Year award

This year's NBA draft class may be underwhelming, but someone will still be crowned the league's top first-year player at the season's conclusion. Even if there's no obvious talent like Derrick Rose, Blake Griffin or Anthony Davis to shower with accolades, we still need a Rookie of the Year.

That means parsing through the candidates as we enter the final third of the season, because a lack of top options shouldn't stifle discussion. There are still talented rookies in this year's class, and they deserve to be talked up even if they're not future stars.

Let's break down some of the top candidates for 2014 Rookie of the Year:

Arguably the odds-on favorite, Carter-Williams brings the most impressive statistical profile of any rookie. Averaging 17.3 points, 6.3 assists, 5.3 rebounds and two steals per game, the No. 11 overall pick stuffs box scores as the focal point of the 76ers' fast-paced offense.

Shooting remains a work-in-progress for MCW: he's shooting just 40 percent overall and his three-point shooting has dropped off after an uncharacteristically hot start. Anywhere around the top of the key, he's downright terrible: 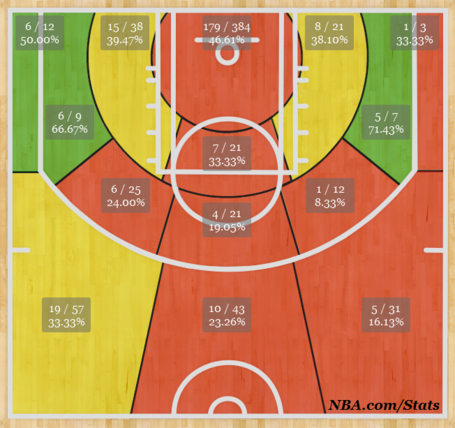 Still, even without a potent jumper, Carter-Williams' unique combination of size and athleticism makes him a terror on both sides of the court. Voters will likely downgrade the Sixers' point guard as his team's record craters in the coming months, but they also love gaudy per-game statistics, and he'll have an advantage there.

Oladipo is so good at certain things -- finishing in transition, making athletic defensive plays -- that his potential likely seems higher than it is, but the Magic guard is still pretty impressive considering how raw his half-court offensive game is.

Compared to Carter-Williams, the No. 2 overall pick out of Indiana doesn't have the stats, but he's consistently shown flashes in recent months and could get some extra credit if Orlando finishes the season with some positive momentum. And then there's the time he did this to Damian Lillard:

That should be worth at least five votes.

After missing time due to injury earlier this season, the No. 9 overall pick started his season with a bang by winning Western Conference Rookie of the Month awards in both December and January. However, the accolades may be more impressive than his actual on-court performance.

Much of Burke's hype has been tied to Utah's improved performance since his return -- the Jazz are 18-24 with Burke this season after starting 1-11 without him. He's proven to be a fantastic mid-range shooter, a valuable skill that should keep him in the league for a while, but attacking the rim has been a challenge and he's shooting just 38 percent overall.

Considering Burke doesn't have the highlight tape of a player like MCW or Oladipo, he likely won't get the same hype as some other guys. Still, if he keeps winning Rookie of the Month awards, it will be hard to ignore him at the end of the season.

He doesn't do much more than score, but Hardaway Jr. has been coming on for New York in recent weeks. Factor in the bonus hype he'll get from starring at Madison Square Garden and it's not of the question that the No. 24 pick gets some votes at the end of the season.

In late January, Knicks coach Mike Woodson decided to hand Hardaway Jr. a more significant role, and he's stepped up. Over the past 13 games, the former Michigan star is averaging 14.2 points per game on 45 percent shooting, including 39 percent on 6.3 three-pointers a game.

Playing catch-up to the other guys, Hardaway Jr. won't be able to match the per-game stats of some other rookies, but he could have the most momentum at the end of the season.

The Greek Freak has cooled off after building some midseason hype, but he's still one of the most fun-to-watch players in the class. Catching up to his peers while coming off the bench is probably impossible, but given the lack of depth in the class, he's going to be deserving of attention come the end of the season.

Relative to historic winners of the award, Antetokounmpo simply doesn't have the statistics to win. He's been surprisingly solid for a 19-year-old European big man still early in his developmental curve and his spot in the rotation is a testament to his talent. Still, he's a work-in-progress and likely won't be close to the most deserving candidate.

However, there might not be a more intriguing prospect coming out of this class. The Bucks might not have a Rookie of the Year winner on their hands, but it's possible they have the best prospect. Antetokounmpo's athleticism, size and aptitude to learn could allow him to be a star in time. There aren't many guys about whom you can say that.