The NBA reacts to Jason Collins signing with Nets

Share All sharing options for: The NBA reacts to Jason Collins signing with Nets

When long-time NBA center Jason Collins came out as the first active gay athlete in one of the four major American sports, the next question was whether he'd become the first to play in a game. Collins is a lot closer to doing so as of Sunday, when he signed a 10-day contract with the Brooklyn Nets.

With Brooklyn down to Andray Blatche and rookie Mason Plumlee holding down the center spot, Nets general manager Billy King made it clear the signing was all for basketball reasons.

"The decision to sign Jason was a basketball decision," Nets general manager Billy King said in a statement. "We needed to increase our depth inside, and with his experience and size, we felt he was the right choice for a 10-day contract."

None of that means it's any less significant.

Weeks after NFL draftee Michael Sam came out as gay, Collins will get a chance to play. NBA commissioner Adam Silver released a statement of congratulations for Collins reaching his goal. 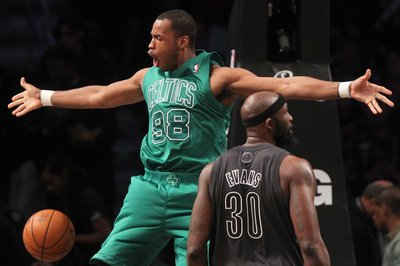 "Jason told us that his goal was to earn another contract with an NBA team," Silver said. "Today, I want to commend him on achieving his goal. I know everyone in the NBA family is excited for him and proud that our league fosters an inclusive and respectful environment."

And the Nets players seem equally pleased to invite Collins into their locker room. Point guard Deron Williams told ESPN New York's Ethan Sherwood Strauss he thought Collins being gay might have deterred other teams in signing him more because of the distraction, not his sexual orientation.

Williams doesn't see the latter as a locker room issue.

"It's 2014, you know," Williams told ESPN New York. "Michael Sam just came out, his teammates welcomed him. They're in college. It's time for the NBA as well."

Kevin Garnett told ESPN New York that nobody should be denied of their goals if they have the ability to contribute.

"I think it's important that anybody who has the capabilities and skill level [gets] a chance to [do] something he's great at," Garnett said. "I think it would be bias, and in a sense, racist, if you [were] to keep that opportunity from a person."

Collins, of course, received a good amount of  support from around the league. Houston Rockets guard Jeremy Lin told ESPN's J.A. Adande that Collins' signing is "a big step" forward. Though Collins is 35 years old, he will still provide what he always has, a 7' body to clog the paint, set screens and liberally use his six hard fouls.

Dwyane Wade on Jason Collins: "One thing I know about him is he fouled very hard.... Welcome back."

Richard Jefferson--Collins friend and ex-teammate in NJ--was thrilled for Collins: "His attitude never changed. He was determined."

KD on Jason Collins: "From what I've heard ... great teammate that puts his body on the line. And I can roll with anybody like that."

KD on Collins: "Physical, physical center that plays his tail off. That's all we should worry about, is how he plays basketball."

Jacque Vaughn played 2 seasons with Jason Collins in NJ. Vaughn said Collins was one of the best teammates he ever had.

Doc on Jason Collins: "We’ve been talking the last 3 or 4 days. Jason and I have texted and talked on the phone. I’m very happy for him."