How the Knicks almost traded Iman Shumpert to OKC, Clippers

The New York Knicks could have gotten a first-round pick from Oklahoma City in return for Iman Shumpert, but that wasn't enough to get a deal done.

Share All sharing options for: How the Knicks almost traded Iman Shumpert to OKC, Clippers

New York Knicks swingman Iman Shumpert would be in an Oklahoma City Thunder uniform by now if the Knicks were prepared to accept an offer of Oklahoma City's 2014 first-round pick, according to ESPN's Chris Broussard:

Even after Shumpert suffered a strained left MCL in a Knicks loss last Wednesday, Oklahoma City was willing to part with this season's first-round draft pick to land the Knicks shooting guard, according to sources with knowledge of the trade discussions. The Knicks, however, refused to do the deal because they weren't getting a current player in return who could help them make a push for this season's Eastern Conference playoffs. At the end of the day, they deemed Shumpert more valuable than the 28th pick (or whatever low pick OKC gets) of the draft, sources said. 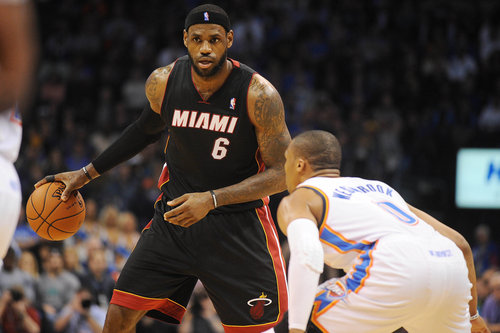 Miami moves up on the strength of a winning streak which included an impressive revenge win against the Thunder.

Grantland's Zach Lowe confirmed that the offer was made. According to Broussard, New York's main goal in any Shumpert deal was to move Raymond Felton and get another point guard in return. This is why the rumored deal for Los Angeles Clippers guard Darren Collison almost took place, but the Clippers apparently backed away after Shumpert sprained his MCL last Wednesday, according to Broussard:

While Shumpert's injury did not deter the Thunder, it did kill the Knicks' hopes of sending him to Los Angeles. Clippers coach Doc Rivers really wanted Shumpert, sources say, and Rivers was willing to do a deal that would have sent Darren Collison, Matt Barnes, Byron Mullens and two second-round picks to New York for Shumpert, Felton and Beno Udrih. But Clippers owner Donald Sterling and others within the organization were hesitant to bet on Shumpert after seeing him go down in Wednesday's game at New Orleans, according to sources.

Shumpert, who is averaging 6.9 points, 4.5 rebounds and 1.8 assists on the season, will have to finish what has been a disappointing year in New York. Still one of the Knicks' most valuable assets given his two-way ability, the 23-year-old's name will surely surface in more trade rumors at the end of the season.