If the losing continues, Kobe Bryant's twilight could unexpectedly be supplemented by another young star.

Share All sharing options for: Finding solace in the Lakers miserable season

It's safe to say that not even the most pessimistic Lakers detractors imagined that Los Angeles' season would come to this. Then again, not many folks thought Kobe Bryant would miss this kind of time.

The Lakers were smoked out of Indiana by a huge Pacers run in the third quarter before eventually succumbing to a 118-98 beatdown on Tuesday. L.A. has now lost 13 of its last 16 games, and Bryant can do nothing but watch and wait for further knee evaluation a couple of weeks from now. As the Lakers' season has spiraled to the bottom of the Western Conference, it's easy to wonder whether the 35-year-old should attempt to come back this year at all. 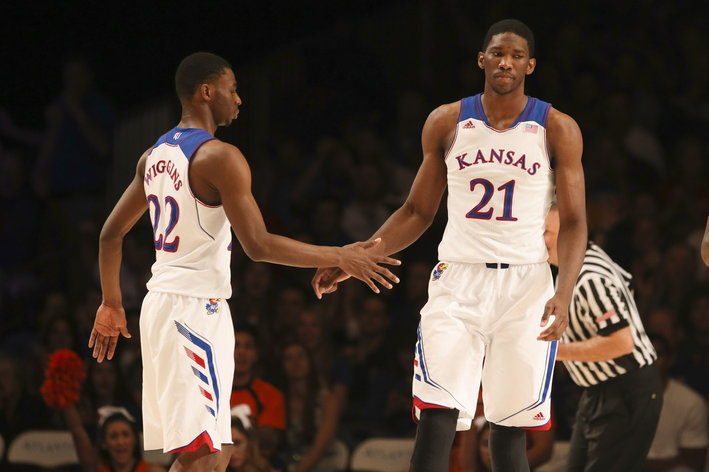 For more on the Lakers, visit Silver Screen and Roll

Bryant is under contract for $48.5 million over the next two seasons. His running mate, Steve Nash, can barely stay on the court, Pau Gasol seems like a shell of himself and Steve Blake is off to Golden State in exchange for end-of-bench flotsam that, by the way, is now playing significant minutes (here's to you, Kent Bazemore). While Mike D'Antoni's system is producing loads of scoring opportunities, the players in the lineup are rotation pieces at best. It's really gotten ugly.

But no one's going to feel sorry for the Lakers and all their hardware, especially considering what the future may hold. Instead of the star-power and title aspirations we typically associate with the purple and gold, roster space, salary-cap flexibility (relative to most years, at least) and draft excitement represent the glitz and glamour this season for one of the NBA's flagship franchises. And they picked a hell of a year to be terrible, regardless of whether it was accidental or not.

The moves to bring in the likes of Nash and Dwight Howard last season backfired initially, but the path has been paved for a potentially rapid, though unintentional, resurgence as a result. As Los Angeles slinks toward the finish line, its chances of turning this dumpster fire of a campaign into a smooth transition from the Kobe era grow better by the day. A draft that has been looming on the horizon as a saving grace for so many of the NBA's cellar-dwellers has suddenly turned into a Hollywood light at the end of the short tunnel for a Lakers team that won a title just four seasons ago.

Not many franchises have the luxury of such a short-lived — albeit steep — downfall as the Lakers are currently diving toward, and fewer still have the opportunity to pick from such a lush landscape of prospects on the other side of the drop-off. The idea that the twilight of Bryant's career would possibly be supplemented by a high-ranking member of the 2014 draft class was laughable a couple of years ago, yet here we are, watching the proceedings unfold.

While Kobe's massive contract will make for tight spending — especially if the Lakers are serious about going after another max-contract player — the chance to draft another star over the summer might make the tribulation worth every penny. But they'd better hit, and they'd better hope Jim Buss knows what he's doing. Any screw-up could cost them, especially considering dearly given their lack of future draft picks on top of the chunk of cap space Bryant's price tag will occupy.

Short-term gain of meaningless success for L.A. this season would pale in comparison to the riches this team could garner with as many losses as possible. As Lakers games are pulled from ESPN's broadcast schedule, the shimmering stage that is Staples Center momentarily becomes a side-show platform when the Clippers aren't on the floor.

The short-term future has a chance to be bright, but the opportunity hasn't come without a little wallowing in the mud.