The Spurs have ridden a six-game winning streak to the top of the power rankings, with another Texas team in the Rockets not far behind. Meanwhile, there's some turmoil at the top of the Eastern Conference.

After everything they've gone through this season, the fact that the Spurs are now on top of these power rankings is pretty insane. All hail Pop.

The Rockets' superb play continues, with wins over the Heat, Pacers and Blazers last week. Houston has the best record in the NBA since the calendar turned to 2014.

The Clippers have won seven games in a row and now own the league's best average point differential thanks to a 48-point stomping of the Lakers:

The Heat tumble from the top spot due to three straight losses. LeBron James has really struggled since his 61-point outburst, however, that performance was too good not to relive:

The Thunder have lost two straight and own a defense that has been pretty atrocious since the All-Star Break. Jeremy Lamb has also really struggled of late, shooting 34.6 percent from the field since Feb. 1.

The Warriors are riding a four-game winning streak, including an impressive win on the road in Indiana. Klay Thompson played hero in the thrilling win:

More on the Warriors: Golden State of Mind

The Pacers have lost four straight, and while the offense has been inconsistent, the more surprising thing is the poor performance of the defense. Indiana is sporting a 105.1 defensive rating since the All-Star Break, per NBA.com's stats page.

Winners of four of five, the Grizzlies have caught the Suns in the West playoff picture. Both teams have identical records, but it's Memphis who holds the No. 8 seed at the moment.

For the Nets, a chance at something special

The Nets' turnaround has shades of the twilight years of Paul Pierce and Kevin Garnett with the Celtics.

For the Nets, a chance at something special

After a three-game losing streak, including a loss to the Nuggets, it was the Mavs who looked like they were in trouble of falling out of the playoff picture. Dallas has momentarily halted their slide, beating Portland and Indiana in consecutive games.

The Blazers lost three of four last week, with all three losses being of the heartbreaking variety. Portland lost at the last-second against the Lakers and blew late leads against both the Mavs and Rockets.

The Raptors have taken advantage of a softer part of their schedule, winning nine of their last 11 games to hang on to the No. 3 seed in the East. Also, "Dino" jerseys coming back!:

It's tough to drop the Bulls so many spots after their emotional win over the Heat, but there were a few stinkers last week as well. But that win over Miami was exciting, right Yannick Noah?!:

Can Eric Bledsoe save the Suns? The young star will return from a knee injury this week and look to help Phoenix with a playoff push. 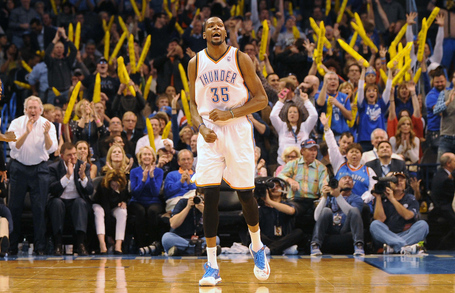 Join Paul Flannery for a weekly look at the NBA. Subscribe for free on iTunes.

Trevor Ariza is having a career season, and he has been especially good to start March. Ariza is posting 27.3 points per game and shooting 63.8 percent overall in four March games.

A clunker against the Celtics aside, the Nets have been playing some phenomenal ball. Brooklyn has won five of six and is 21-9 in 2014.

The Wolves had a chance to possibly make a run, but home losses to the Knicks and Raptors ruined that. Minnesota isn't officially eliminated from playoff contention, but they may as well be.

The Knicks aren't dead yet, and Phil Jackson may be joining the front office to be president of basketball operations. There's some hope!

The Pelicans have won three games in a row after losing eight in a row, mostly thanks to the superb play of Anthony Davis. The Brow is averaging 29.7 points and 15.3 rebounds during the three-game streak:

The Nuggets hit rock bottom a few weeks ago, but the return of Ty Lawson from injury has at least brought back a shred of respectability. Denver won two games last week, nearly matching the three wins they posted all of February.

It was quite the week for the Lakers. Sandwiched in between wins over the Thunder and Blazers was a three-game losing streak that saw Los Angeles give up 408 points:

The Cavs' playoff hopes are slip-sliding away thanks to a four-game losing streak. Luol Deng is barely shooting over 40 percent since being traded to Cleveland.

The Jazz ended an ugly five-game losing streak by beating the hapless Sixers, which obviously isn't too much of an accomplishment these days. Utah lost those five games by an average of 17.8 points.

The Magic have lost five of seven games, with the only two wins coming against the Sixers. But hey, cool Dwight Howard tribute video:

The Wolves have won just once since beating the Wolves on Feb. 1...and they still have a bit of a cushion for the No. 8 seed in the Eastern Conference.

Will the Sixers win another game this year?