Rasheed Wallace is still himself, even while sitting on the sidelines. The Pistons wouldn't have it any other way.

TORONTO -- Rasheed Wallace leans his shoulder into Tony Mitchell's and pushes. There is only one objective for Mitchell: to make Wallace budge. The 6'8, 235-pound Detroit Pistons forward pushes back, but the rookie is not going to win this one. The 16-year veteran-turned-assistant coach knows it.

"Get your weak ass outta here," Wallace says with enough volume to be heard clearly over the blaring rap music in the locker room. "You can't move me."

Later, Wallace, who had eaten his pregame meal in the Air Canada Centre's media room, puts some popcorn in a plastic cup. After Mitchell informs him that they're listening to Lil Snupe, Wallace questions the abundance of artists who share the prefix.

"Everybody wanna be called ‘Lil,'" he says.

Wallace grabs a Gatorade and retreats to the private area behind the locker room. He re-emerges and fills his plastic cup again.

"You still goin' at the popcorn?" forward Charlie Villanueva says.

Unmoved, Wallace, wearing a white Detroit warmup shirt, shorts and his classic Air Force 1s in Pistons blue and red, picks up and inspects a much more colorful shoe belonging to guard Rodney Stuckey. No longer an active player, Wallace still walks around like he owns the place. 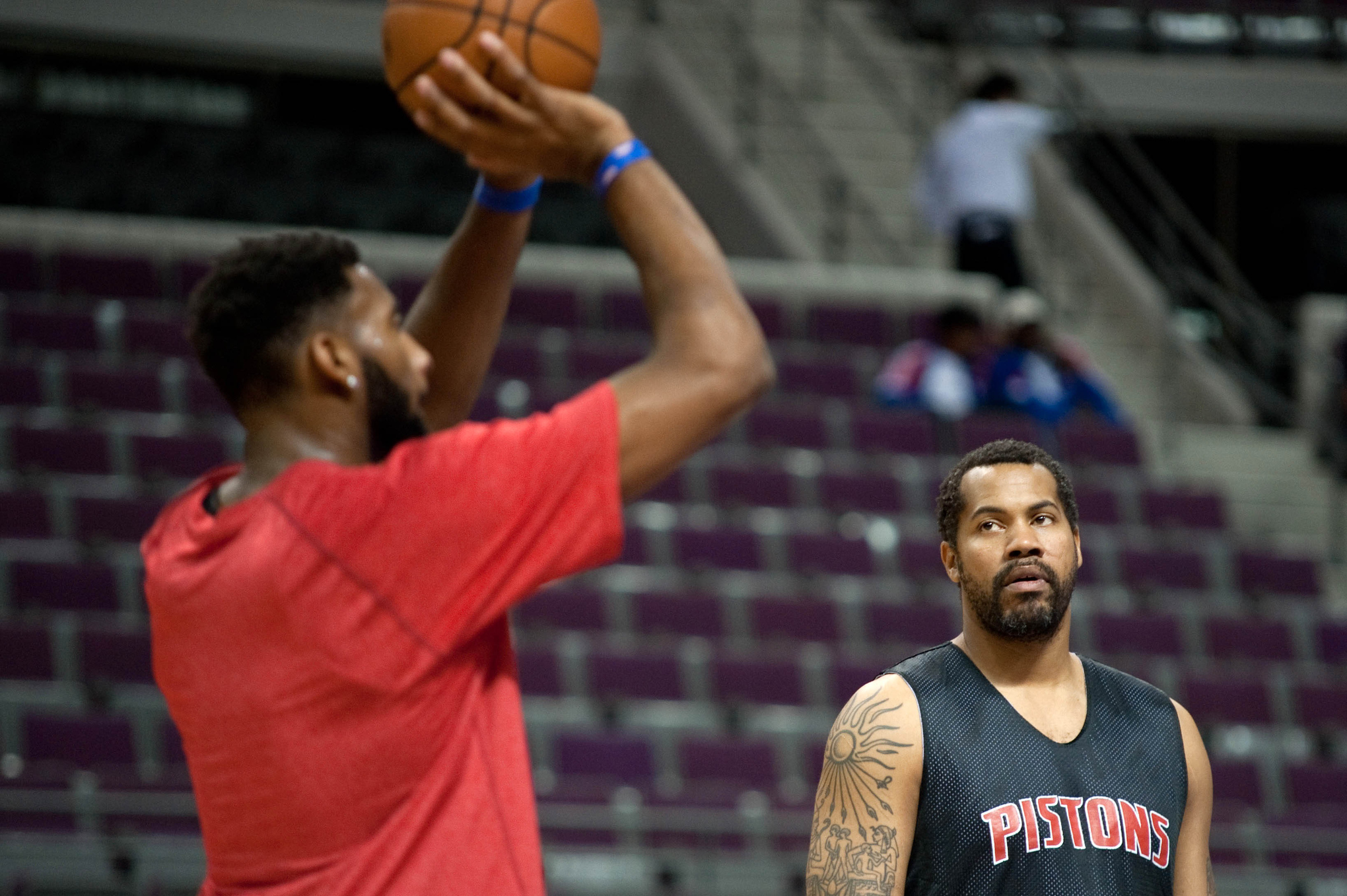 Wallace is the man who popularized the phrase, "Ball Don't Lie." He's the one who, instead of answering reporters' questions at a postgame press conference in the 2003 playoffs, famously repeated, "Both teams played hard," earning himself a $30,000 fine. His total of 317 career technical fouls is the most in history, and he led the league in that category eight times from 2000 to 2010, setting an NBA record with 41 in 2001.

Outspoken but never a self-promoter, Wallace as a player was equal parts intelligent and goofy, unapologetically emotional, honest and playful. He was beloved by teammates for his loyalty and fans for his nonconformity, yet sometimes misunderstood because he didn't care what others thought.

This is not exactly the typical profile of a guy making a transition to coaching mere months after retirement.

"Never thought that he would be coaching. Ever. Anybody but him."-Chauncey Billups

"No, never," guard Chauncey Billups says. "Never thought that he would be coaching. Ever. Anybody but him."

Billups played with Wallace for four and a half seasons in Detroit. Bonded for life after winning the 2004 NBA title together, he considers Wallace a brother and sees him the same way he did as a teammate. Returning to the town where he made his name for his 17th season, Billups admits he's never had a coach quite like this.

"He's loud, first and foremost," Billups says. "He just speaks with a lot of substance. A lot of things that he says, he might say it in a different way than a coach might say it, than a regular coach that's been coaching for years, you know what I'm saying? He's got a lot to share, though."

Billups might not have seen this coming, but in a 2008 ESPN The Magazine profile, Joe Dumars, Flip Saunders, Bill Guthridge and Stan Van Gundy spoke of Wallace as a potential head coach. They referenced his savvy, his communication, his recognition of where everyone should be on the court at all times.

Back then, big man Amir Johnson was just finishing his third year as a Piston, finally in the rotation after two years of sitting on the pine and playing in the D-League. The last high schooler ever selected in the draft, Johnson came into the league as an 18-year-old and Wallace taught him the ins and outs of the NBA.

"He was my old head," Johnson says, adding that he is sure that the Pistons' youngsters can learn from him.

"He was always the main one always talking on the floor, even when he was on the bench," Johnson continues. "He always told me, the more you talk, the better the defense is."

Now that Wallace is on the sidelines, Detroit isn't interested in changing him. 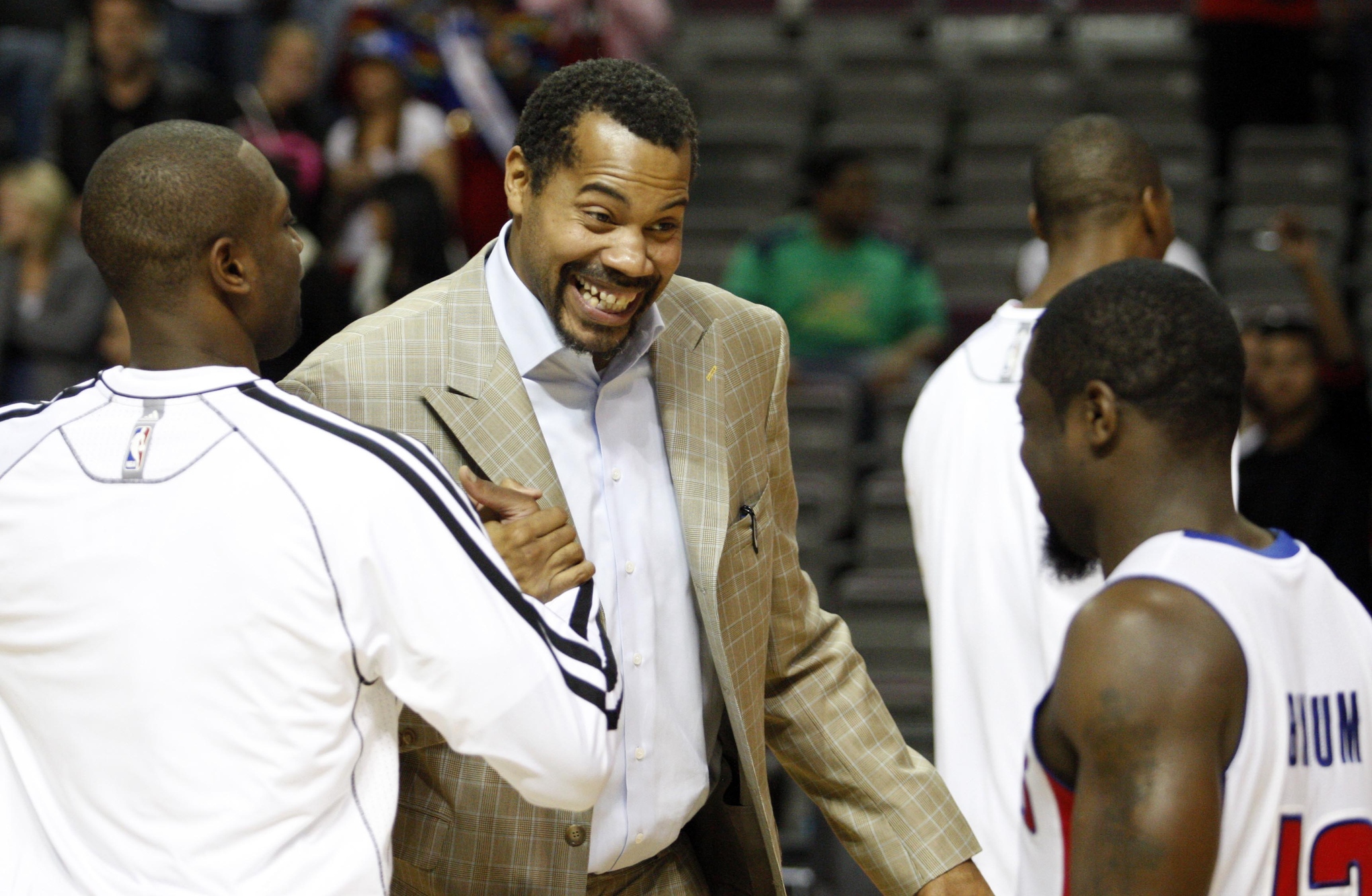 Detroit brought Wallace aboard to work with 20-year-old Andre Drummond and 23-year-old Greg Monroe, building blocks for a dominant frontcourt. The addition of Josh Smith last offseason, combined with Monroe's upcoming restricted free agency, might complicate things, but there isn't a team in the league that could use Wallace's services more than this one.

In Drummond, Detroit has a potential two-way superstar at center. Needing to learn the tricks of the trade, Wallace is exactly the kind of guy to guide him. In Monroe, the Pistons have a skilled power forward about a thousand notches quieter than Wallace, but one who shares his thinking man's approach to the game. Monroe bounces ideas off of Wallace and Wallace gives him tips on post offense and defense.

"Some people get his loudness confused," Monroe says. "When he's speaking, he's always speaking with a purpose. When he's talking loud, it may come off a certain way, but it's always helpful."

After a practice in November, the hyper-athletic Mitchell put on a bit of a dunking exhibition. The 39-year-old Wallace did his best to model what Mitchell was doing, and Drummond shared the results on Vine.

"He needs to quit that," Detroit guard Brandon Jennings jokes. "That's why his back be hurting."

Sometimes, Wallace joins the Pistons in scrimmages. According to Jennings, he still thinks he's got it. The competitive edge hasn't gone anywhere; when Wallace is on the floor, he wants the ball.

"To be honest, 'Sheed can still play," Mitchell says. "He can shoot the ball. Probably a little bit out of shape, but other than that though. It's fun, man. We don't be trying to hurt him out there or make him pull a hamstring or something."

When the 6'11 Wallace releases the ball high above his head on a turnaround jumper, there's still no one who can block it. If it goes in, everyone will hear about it.

An inside look at Sheed's coaching debut

Our Pistons site was on scene at the Orlando Summer League to see Wallace's first game as an assistant.

At least that's what this White House petition asks.

After Detroit's 101-87 loss to the Raptors, the ever-professional Monroe is fully dressed and standing at his locker when the media is allowed in. Wallace has already left.

A reporter approaches and Monroe deadpans that he won't be taking questions. The reporter comes back with some sound logic: he's already talking.

Another reporter gives it a go: "You had a double-double, did you know that?"

Before deciding to sit down and answer questions in earnest, Monroe makes eye contact with the second reporter.