Trevor Ariza is having a standout season

Ariza has thrived shooting from the corner-three and Washington's offense is much better when he's on the floor. But it wasn't always that way.

Share All sharing options for: Trevor Ariza is having a standout season

Washington Wizards swingman Trevor Ariza was once an athletic and defensive journeyman with a broken jumper. He's now a knock down shooter and a capable third option on an offense for a team that is fighting for home court in the Eastern Conference playoffs. So just how special of a season is this for Ariza?

Well, consider this; prior to this season, he had never converted over 37 percent from long range. Last year (his first with the Wizards) he shot 36.4 percent and attempted 3.7 three point attempts per game. In 2009-2010, he shot 5.7 three pointers per game with the jumper-happy Rockets, but he converted just 33.4 percent of those attempts. Between those seasons, he played in New Orleans and wasn't a reliable shooter.

This season, however, he's launching six trey balls a game and netting them at a 42.2 percent clip. So what changed? Well, it appears that Ariza has found his comfort zone with the Wizards by sitting in the corners and spacing the floor for John Wall and Bradley Beal.

In his lone season with Houston, his attempts from the corner increased, as did his percentage, but he didn't shoot them enough to be a consistent threat from range, hence why he converted just 33.4 percent of his total threes. Last season, however, 18.8 percent of Ariza's shot attempts came from the corner and he knocked down 47 percent of those attempts.

He's taken that production to the extreme this season. This is Ariza's shot chart: 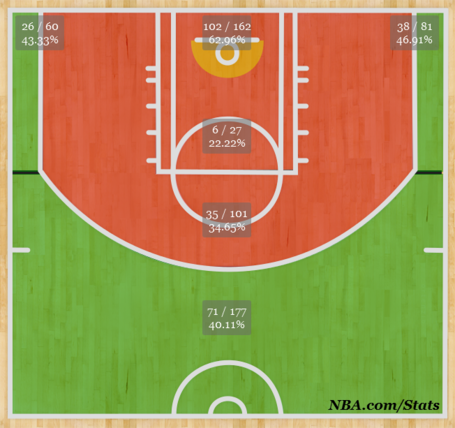 And this is the distribution of those shots: 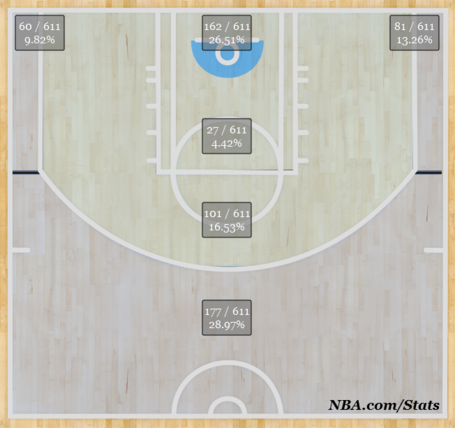 Nearly a fourth of Ariza's total shot attempts come from the corner-three and he's netting those shots at a pace above the league average. He's also in the green in above-the-break three-pointers, too, which further suggests the actual development of his jump shot. What we have in Ariza is the ultimate transformation from athleticism to production and the Wizards are a better team when he is on the floor.

When Ariza hits the bench, Washington's offensive rating dips to 96.4, nine full points worse than when he is on the floor. The teams True Shooting dives too, from 54.9 percent when he's on the floor to 49.9 percent when he's off, per NBA.com's media site. The Wizards as a team shoot 40 percent from range when Ariza is in the game. When's on the pine, however, that number drops to 34.6 percent, again per NBA.com's media site.

Ariza is the perfect floor spacer for Wall and Beal. He sits in the pockets of the court and extends defenses in whichever corner he's posted in. He absolutely has to be accounted for, because he's money from distance, and that open up the floor for Washington's athletic backcourt to penetrate. Slide down to help in the paint on Wall and he'll zip the ball over to an open Ariza. But stick tight to Ariza in the corner and Wall has a one-on-one lane to the rim. It's the perfect balance for the Wizards.

But as we highlighted, Ariza wasn't always the reliable jump shooter that he is today. He showed signs as a three-point threat in Houston and he blossomed when he came to Washington. His contract expires this summer and he'll be in line for another payday, one he is well worth now.