For Chris Bosh's latest feat, he's added a three-point shot and become one of the league's most efficient scorers.

Share All sharing options for: Chris Bosh's 3-point shot just the latest evolution of his game

Few players have changed their games as substantially and as frequently as Chris Bosh since his departure from the Toronto Raptors four years ago. So when the Miami Heat big man showed up for the 2013-14 season and started draining clutch three-pointers on startled opponents, should anyone have been surprised?

It feels like we don't always appreciate Bosh as much as we should for someone with nine All-Star appearances and two titles on his resume. A good deal of that is because of the player Bosh is -- selfless, versatile and absurdly talented. The 29-year-old has made a likely Hall of Fame career out of being the perfect glue guy in South Beach.

But what makes Bosh so remarkable is the constantly-changing nature of his game. Each year, he seems to add some new weapon or skill, some additional way to keep Miami ahead of the curve in the Eastern Conference. This season, that long-range shot is the latest step in his evolution.

Bosh seemingly started working on this aspect of his game when he first joined the Heat and started deferring much of his scoring load to LeBron James and Dwyane Wade. It probably reached its conclusion this season, when the three-pointer became a bona fide weapon for our favorite dino-hoopster.

For the first time in his career, Bosh has a true shooting percentage over 60 percent. He's at 61.4 this season, to be precise, which is good for sixth in the NBA. There aren't many places where you'd be happy to see Bosh rising up for a shot: 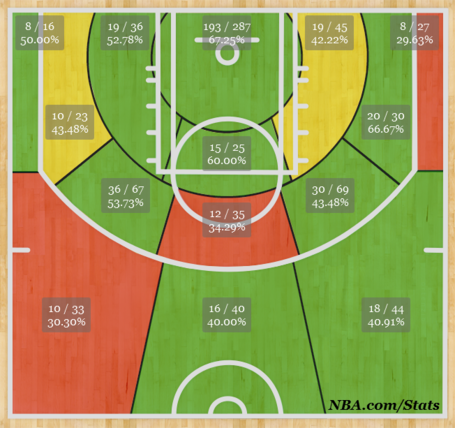 When we talk about guys with this kind of size and shooting efficiency, it's usually the Dirks and Durants of the world. Bosh doesn't quite put it up at the same volume as those two, but the emergence of a serious long-range shot has opened up more opportunities across the floor.

It's easy to forget now, but before Bosh joined Miami, he was a full-fledged, stat-stuffing superstar in Toronto. During his final season with the Raptors, Bosh averaged 24 points and 10.8 rebounds per game while shooting 51 percent from the floor.

We don't really think of Bosh that way now, primarily because he doesn't put up the gaudy numbers. Instead, he's become a hyper-efficient scorer who can hit practically any shot, a poor man's Dirk Nowitzki who also happens to be one of the best defensive bigs in the league.

This kind of development could be a big deal for Miami come the postseason. We've seen what hot shooting can do for a team that's already powered by elite stars and rugged defense -- when Miami's hitting threes, the rest of the puzzle falls into place so nicely most teams don't stand a chance.

Having Bosh as another guy who can space the floor, especially as Wade's range shrinks inward, has already proven to be huge for Miami in close games. By embracing Bosh's outside shot -- he's taking them more than ever (3.7 per game) this month -- the Heat can play lineups with an astonishing amount of variety.

Imagine trying to scramble on defense, exhausted in a Game 6, when the Heat are spacing the floor with James, Bosh, Ray Allen, Shane Battier and Mario Chalmers.

Actually, that's the second-most common lineup for Miami this season, and it's pummeling opponents. When that group is on the floor, with Wade on the bench, the Heat outscore foes by 15.5 points per 100 possessions, per NBA.com. They're averaging 117 points per 100.

Obviously we won't see the Heat benching one of the league's best guards any time soon, but the fact that Miami can be so dominant without him shows a clear path towards success even if Wade's not at 100 percent. If there's one thing that powers Miami to another title without a rolling Wade, it might not be a red-hot LBJ, but a game-changing Bosh.

This is just what he does, though. Bosh continues to improve his game, yet you never see it in the box score. Few guys are making the same kind of impact on both ends, and this latest development to his game will only allow him to age better. An expanded shooting range almost guarantees Bosh a career well into his 30s assuming good health.

And for the Heat, Bosh's evolution is a key part of the constant success. They've needed different things throughout the years, and pretty much every time, he's stepped up and adapted his game.

In the end, maybe we shouldn't think of Bosh as a raptor, after all. A chameleon might be more appropriate.