Another year, another NCAA Tournament where top stars' teams bow out early and their self-serving head coaches try to convince them to delay their professional careers to work for free.

Why would Andrew Wiggins choose to pass up millions of dollars and freedom to work on his game full-time to watch Bill Self screw up another big game with poor schemes?

Why would Tyler Ennis and Jerami Grant choose to listen to a lying, self-serving coach with the most losses to double-digit seeds in NCAA history instead of mock drafts putting them in the first round?

Why would Jabari Parker sign up for another year of being scapegoated by a star system built on guilt, fear and bullshit?

The stars sure as hell don't need college basketball.

What makes March Madness special isn't necessarily the presence of guys like Wiggins or Parker. Anyone remember Kevin Durant's tournament run? But you do remember the one Mario Chalmers, Brandon Rush and Sasha Kaun had. The tournament is about upsets, catching lightning in a bottle and the magic of constant do-or-die situations. How many people dying with every possession as Mercer beat Duke on Friday knew anything about Mercer? We've been following Duke's Parker for years -- NBA fans, college fans and the like -- yet it's Mercer that captivated everyone on Friday, not the phenom wing player.

That speaks to the tournament's power: it doesn't need stars because it can make stars of anyone. It's a brilliant competition. Of the top 14 in DraftExpress' current mock, only three of them -- Julius Randle, Aaron Gordon and Willie Cauley-Stein -- are still in the tournament. And that won't matter one whit to the NCAA, because everyone (myself and loads of NBA partisans included) will be watching Cinderella do her thing.

The NCAA doesn't need the stars, and the stars don't need the NCAA. The tournament can help prospects: Derrick Rose, Mike Conley, Chalmers and Kemba Walker are some of the recent players helped by productive Marches. Carmelo Anthony's title run in 2003 certainly fueled his status as a top-3 pick.

But more often than not, the best NBA players have shrug-worthy or literally nonexistent tournament experiences. The preps-to-pros stars like LeBron, Dwight Howard, Kevin Garnett and Kobe avoided it altogether. They managed to mature into great NBA players just fine. Durant's college postseason was forgettable. Kyrie Irving came off the bench in one of his three tourney games.

So, out of the top 15 players in the NBA last season, we have a grand total of one NCAA title, four Final Fours and eight Sweet 16s. Tell me again why we're supposed to be down on Wiggins and Parker? Tell me again how this failure means Tyler Ennis needs to come back for another try?

Tell us again, college sycophants, what the problem is here. 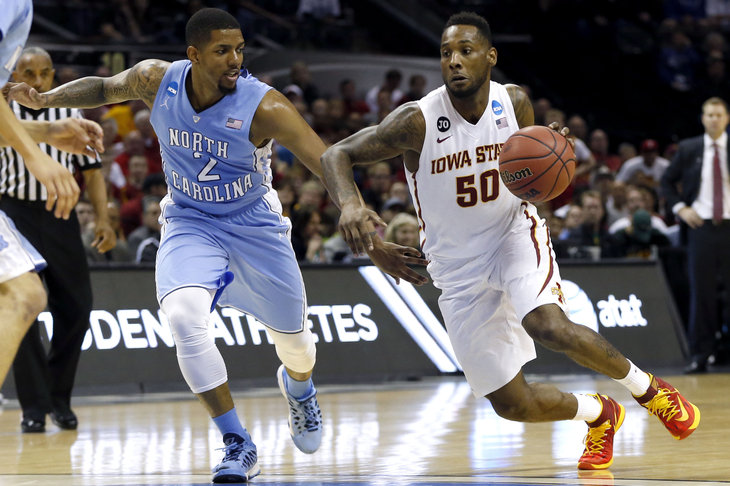 And now if Ennis and Grant leave like all of those young, talented and unpaid Orangemen before them left, Boeheim has to do some more 'cruitin and log those miles just to build another set of players he can coach just well enough to get beat out of the tournament. Now he has to teach more 18-year-olds a defensive system that will help them win regular season games and actually hinder their pro prospects, since no one in the NBA knows how to assess the defensive potential of kids stuck in a 2-3 zone full-time.

The worst part is how unbelievably single-minded Boeheim is about this stuff. Winning college basketball games is all that matters. When Boeheim says:

"Kemba Walker, he's about what, the 20th best point guard in the NBA? If he'd have played here for us yesterday, he'd have had 40 points. That's what he would've had and everybody would've said, ‘Jeez, he's pretty good.'"

... he's ignoring that if Kemba Walker played for Syracuse this weekend, he'd be getting paid nothing, whereas Kemba Walker The 20th Best Point Guard In The NBA is making $2.5 million this season. Ennis and Grant can listen to Boeheim and come back to play for room and board and make Boeheim's job easier, or they can get paid to do their own jobs. Tough choice, right?

Of course, a lot of draft prospects fizzle out in the NBA. As Boeheim says, the league is really competitive. The best college player in 2011 has done well for himself in the pros, and he's right around the 20th best player at his position. So if you are in a spot where you can guarantee yourself at least two years of NBA salary, shouldn't you take it? If Ennis is slotted at No. 15 in the mocks when decision time arrives, knowing how deep and talented the NBA is, wouldn't it be smart to position himself to take that $4 million guaranteed and believe in his own ability to work hard, develop and get those third and fourth years guaranteed, to get that second contract?

Many players benefit from college experience. Damian Lillard never made an NCAA tournament, but his small conference seasoning helped him come into the league a fuller player. But Lillard never really had an opportunity to guarantee himself millions by entering the NBA early. College worked for him. It allowed him to develop and display his game to the point where an NBA team felt comfortable using a high pick on him. College worked for Jimmer Fredette, too. (Did it work for the team that drafted him No. 10 overall? Nope.) It worked for Doug McDermott, who will be a high pick despite Creighton's Sunday loss. It's worked for scores of current NBA players.

But it didn't really do anything for Andrew Wiggins or Jabari Parker, who would have gone Nos. 1 and 2 last year if the age minimum didn't exist. It didn't do anything for Marcus Smart, who passed up being the likely No. 2 pick a year ago, only to get suspended for pushing a heckler and got booted out of tournament early. It doesn't look like an extra year with Ol' Roy Williams did much for Harrison Barnes, who amazingly looks less polished than Andre Drummond right now. Kyrie sure doesn't seem to have needed much Coach K.

So what we're left with is a landscape in which John Calipari, the guy who has embraced and exploited the one-and-done culture, is the last man standing. Coach K's program? Done. Bill Self's program? Done. Roy's team? Done. Cal survived them all this season, a year in which his critics basked in Kentucky's misfortune and had the audacity to suggest his one-and-done, pump-and-dump system had failed. Ha.

Those other coaches believed their own bullshit, that the stars needed them. Wrong.

Those other coaches -- the Boeheims of college ball -- believed their own bullshit, that the stars needed them. Wrong. The stars needed a year to camp out before entering the draft, and the Boeheims and Krzyzewskis and Selfs and Roys all beg for the privilege of being the host. Only Calipari acknowledges the power of the relationship lies with the players. That he moves on to next weekend while the others stay home is some sort of righteous cosmic justice.

When Kentucky's done, Cal will tell Julius Randle and Willie Cauley-Stein to go get that paper. And that's why Cal will grab the next Randle, the next Anthony Davis, the next John Wall, the next Derrick Rose. If Self, K and Boeheim want to be honest with their own stars and tell them they are ready to go get paid, maybe Calipari wouldn't have such a strong hold on the preps-to-pros pipeline.

But that would require the big-name college coaches to put their own fates to the side for a minute. Fat chance of that happening.