Can the Thunder's new class graduate in time?

Oklahoma City's sophomores are in a great learning environment. Will they be counted on when the Thunder are tested?

Share All sharing options for: Can the Thunder's new class graduate in time?

TORONTO -- Kevin Durant parked himself on a folding chair in the middle of the Air Canada Centre's visitor locker room. He took a break from watching film to hold court, surrounded by a pack of media members who only see him once a year.

Yes, he's comfortable hearing his name next to Michael Jordan's, he said, but he still has a long way to go. Yes, he always aimed to be one of the best. Since he revealed he was a Toronto Raptors fan growing up watching Vince Carter and Tracy McGrady, he was asked if playing at the ACC was special. Not exactly, but it's fun, and, "the arena is electric every night."

All in a day's work for one of the NBA's signature superstars. Durant may be the MVP when this year ends and he's certainly the biggest reason for another successful Thunder regular season. They're second in the West, chasing the San Antonio Spurs for first and are once again a top-10 team in offensive and defensive efficiency. Their postseason fate will largely be determined by Durant and Russell Westbrook.

But over in the corner was part of the future, and possibly the difference between winning and losing a series. Point guard Reggie Jackson sat silently, headphones on, mentally preparing for yet another game. Swingman Jeremy Lamb snacked on popcorn next to him. One locker over, forward Perry Jones was fixated on his phone.

"They do look at ... the little bit of success that I've had so far to get them through-Reggie Jackson on Perry Jones III and Jeremy Lamb

"Those are my two guys," Jackson said. "Everybody's together, we always try to stay somewhat together as a team, be cohesive. But that's my little clique. That's my crew. We're always constantly in each other's rooms on road trips, watching games, talking to each other, whether it is at home sending funny little texts to each other, especially finding memes and texting each other."

Jackson barely played as a rookie two seasons ago, a spectator for the Thunder's Finals run. Now Oklahoma City's top reserve, he serves as a model for sophomore duo of Lamb and Jones. Like Jackson, they were confined to the sideline as rookies, not seeing the court for a meaningful playoff minute. Lamb and Jones looked like they were establishing themselves earlier in the year, but their playing time has fluctuated down the stretch.

"I've gone through a similar situation, so I just try to tell them things," Jackson said. "I think they do look at some of the success, the little bit of success that I've had so far, to get them through because I was in a similar role and it's been going like that for even my career. We're always on each other about we know how great each other is and what each other's destined to be." 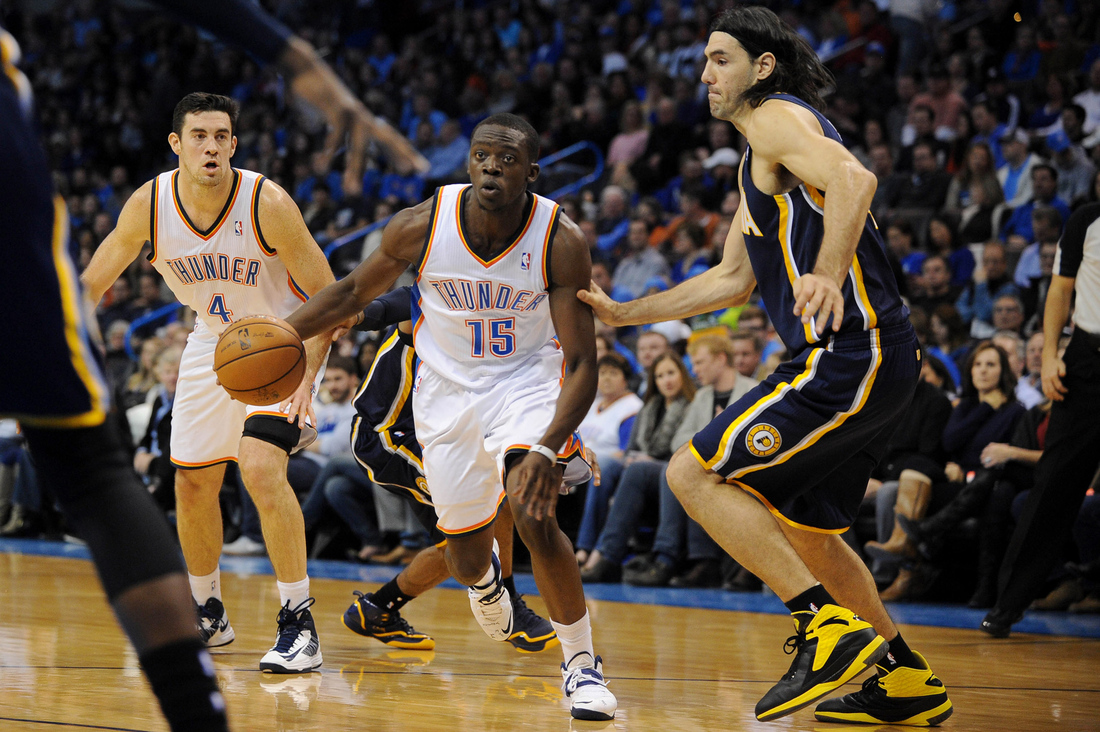 Lamb initially slid into Kevin Martin's spot as a scorer off the bench. He averaged 10 points in 21 minutes per game and made 40.6 percent of his threes in the season's first two months. But his percentages dipped in the new year, and his minutes took a serious hit after the All-Star break.

"With Jeremy, minutes are going to be there sometimes, and sometimes they're not going to be," Thunder head coach Scott Brooks said. "That's part of being on a team that's really good that's going to have to have sacrifices throughout the team. Not just him, but everybody has to sacrifice."

Lamb and Jones had their moments, but none were bigger than back in January against the Miami Heat, when Lamb scored 18 points on 7-for-10 shooting and Jones' 30 minutes helped changed the game in a 17-point victory. Jones started the second half and guarded LeBron James as part of a small lineup that took the Heat by surprise.

It hasn't always gone that well. Lamb logged just two minutes against the Chicago Bulls last Monday, then played 26 against the Cleveland Cavaliers three days later. He sat until there were 20 seconds left in the first overtime period the next night in Toronto. With the game tied and two seconds on the clock, Lamb missed a 30-footer, then played all five minutes of the second overtime. In 20 minutes on Monday against the Denver Nuggets, he missed seven of his eight field goal attempts. Jones has been benched for all but nine minutes of OKC's last five games, and neither one played when they went to overtime in Dallas on Tuesday.

"It's a lot tougher than I thought it would be, to be honest"-Perry Jones III on his sporadic minutes

Jones has been dealing with a might-play, might-not situation all season long. Possessing a rare mix of size and speed, the 6'10 Jones is a natural forward, but he stepped in as the starting shooting guard for a time when Thabo Sefolosha suffered a calf injury at the end of February. Now rookie Andre Roberson is starting, and Caron Butler, signed as a free agent on March 1, is averaging 28 minutes per game even though he's only shooting 36 percent from the field. Brooks called the shooting guard position "fluid."

"It's a lot tougher than I thought it would be, to be honest," Jones said. "Not knowing if you're going to play at all, not knowing if you're going to play just a couple minutes, a couple seconds, it's always tough. It's tough mentally, too. It's tough mentally more than anything. Basically all you can do is sit back and have the mindset that you're gonna play a certain amount of minutes each game and if you do play it, good, but if you don't, you've got to move on to the next one." 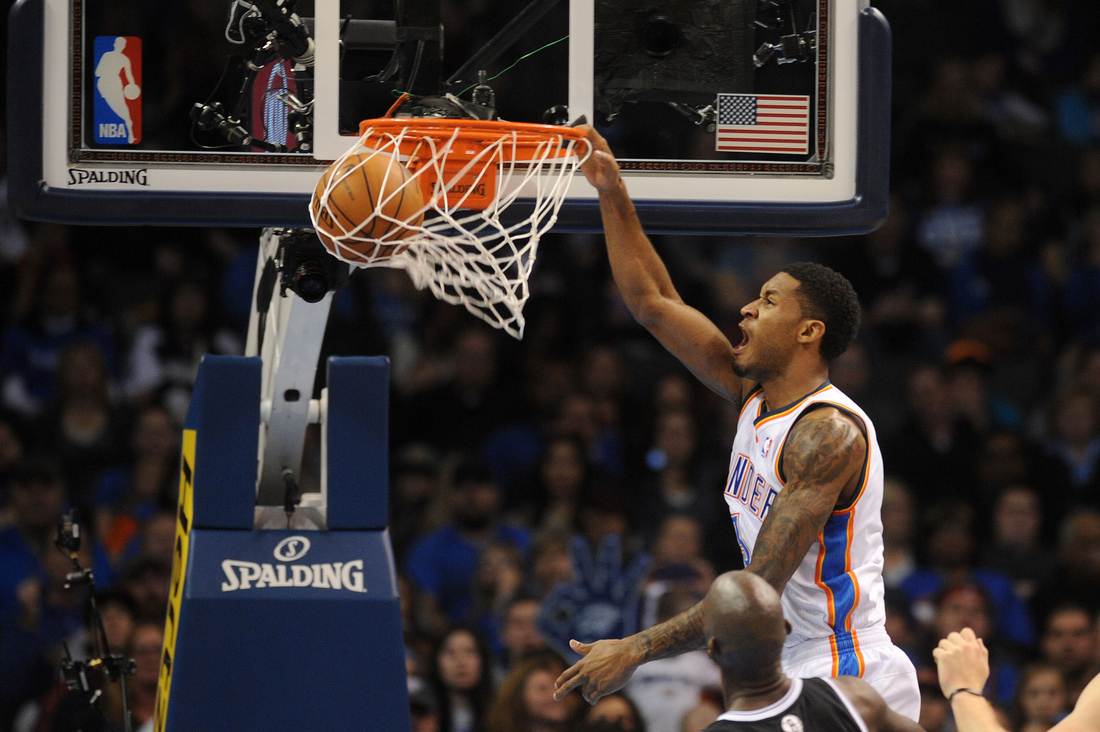 In limited action, Jones has shown extraordinary growth on the defensive end since his rocky rookie season, and he's making a respectable 36 percent of his three-point attempts. Called unselfish to a fault when he came out of college, the Baylor product blended in nicely when given opportunities. When he hasn't, at least he has Lamb right beside him.

"It's good to have somebody that's with you that knows exactly what you're going through," Jones said. "If I was here by myself, I think it'd be a lot tougher than it is now."

Lamb said he's happy to have Butler around. A UConn alum, Butler met Lamb at the 2011 Final Four when he and the Huskies won the national championship. The 34-year-old supported him even before coming to Oklahoma City. They swap stories. The veteran's presence, though, means Lamb's getting fewer chances, and Brooks has a reputation for preferring older players in his playoff rotation.

It's been a learning and confidence-building year for Lamb. On the one hand, he proved he can score in this league. On the other, he might again be reduced to a non-playing role this spring.

What happened to OKC's once-deep bench?

Veterans and youngsters alike are struggling as the Thunder hit the stretch run.

What happened to OKC's once-deep bench?

Beyond Oklahoma City's ability to pick out prospects, the organization has always been praised for its patience. While the two sophomores might be making more of an impact elsewhere, that virtue has been forced upon them. They'll listen to their teammates and coaches while doing their best to stay engaged, and they don't have to look far for encouragement or example to follow.

Even Jackson has to adjust to different roles, starting 33 games in Westbrook's absence. Some nights he's on the floor at the end of games, others he's not. He's had solid overall output, as well as stretches of inefficiency and inconsistency. He racked up 25 points and 12 rebounds in that double-overtime game in Toronto and 16 points and 11 assists against the Nuggets. A perfectionist, he's still trying to be better at not getting "kind of down and gloomy," as he puts it, when things don't go according to plan. It took Jackson time to get where he is and he can see big things coming from his crew.

"There's no doubt in my mind, just the way they compete, the way they play, the standard that they hold themselves to," Jackson said. "I think they're going to be great players in this league once they get the opportunity to just show all their talents. They're two special individuals. They're hard-working, they beat themselves up, have a tendency to do so as well. I think as long as they remember how good they are and they continue to work, they'll be special."