Q&A: Avery Bradley on missing the playoffs, his defense-first approach and his veterans

With just a few weeks left in Avery Bradley's fourth season with the Celtics, he discussed the ride he's been on in Boston and how this year has been much different than the last.

Share All sharing options for: Q&A: Avery Bradley on missing the playoffs, his defense-first approach and his veterans

TORONTO -- Avery Bradley's never had a season like this. He's used to championship aspirations, playoff preparation and a veteran locker room. With Kevin Garnett, Paul Pierce and Doc Rivers elsewhere, the Boston Celtics' season will end in April for the first time in Bradley's four-year career.

He's also headed into restricted free agency, and his future isn't certain, though the team would like him back. The combo guard has averaged 14.4 points in 30.7 minutes this year and he's made 37 percent of his three-pointers to go along with his typically excellent defense.

Bradley spoke to SB Nation about his year under new head coach Brad Stevens, what he learned from the vets and more:

How would you describe this season?

It's a learning season more than anything for everybody. The coach, the players, we've all got a chance to learn the game this year and learn how to play in certain situations. I feel like even though we didn't make the playoffs and this year didn't end like we wanted to, we can still take a lot of positives from this year. I'm pretty sure everybody can say that.

Can you really know what a coach is like or what a player is like before you get to be on a team with him?

I had no idea. Nothing.

What did you learn about him playing for him?

Everybody pretty much says the same thing because it describes him the best: he loves the game, he's very smart, he watches a lot of film and that makes you respect him. That's all you can do is respect him because he knows his stuff and he wants to see everybody succeed. To have a coach like that is just amazing because even if you make a bad play, he's always there to encourage you to go out there and make the next play be a good play. So I just enjoy having him as a coach.

You were drafted when you were 19, now you're 23. What's the difference between 19-year-old Avery Bradley and the person you are now?

A lot more mature, learned the game a lot more, learned where my spots are, situational play. From playing with the guys that I played with, Kevin Garnett and Paul Pierce, I learned a lot about the game. I learned how to finish games. Lots of different things. It's kind of like this year. Even though I haven't always got a chance to play my first two years, I still was able to take positive things about that and that's being able to learn from players who I played with. And I feel like that's the same thing this year. Even though we aren't having a great year, we still can learn a lot from a great coach and from some good players.

How about off the court? 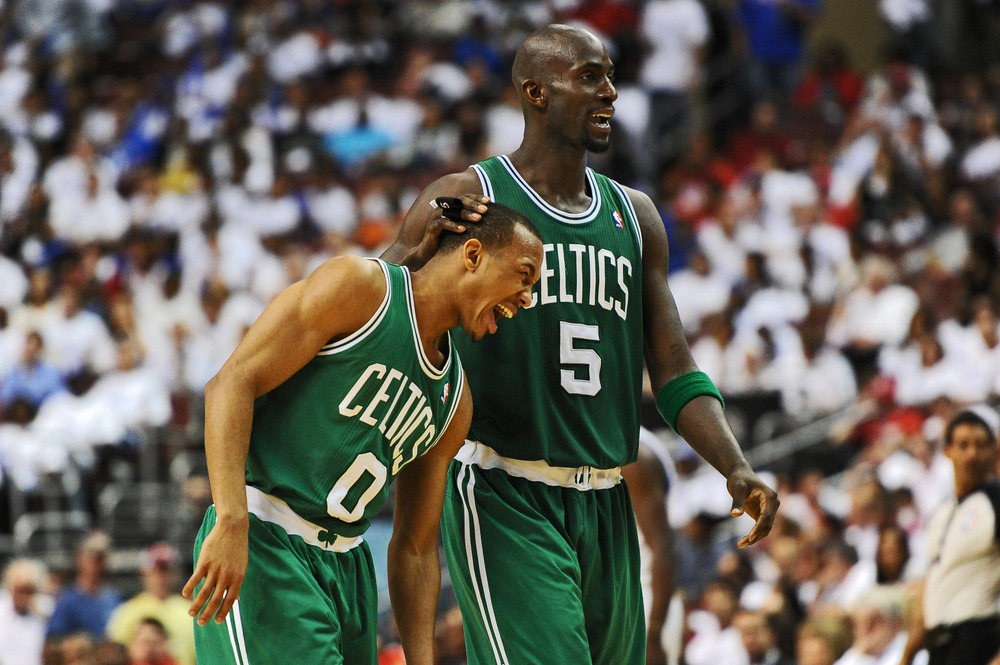 You mentioned KG -- you can't control where you're drafted, you don't know what culture you're going to go to. How much did landing up on a team with him, Pierce, Rajon and Doc shape you? Would you be a different player today if you'd started in a different situation?

I think so. Definitely I would have. Because I learned how to play basketball the right way. Not to say other people don't, but being on a team like that, I learned how once you cross those lines, it's all business. And that's one thing I can say, all those older guys that I played with, that was their approach to practice, to the game. Once they cross this line, it's game time. That's how Rondo is. They kind of kept that culture here and that helped me become a man off the court and on the court because they're professionals on and off the court, so I feel like I'm passing that along to everybody else even though I'm a young guy. We know how to do things the right way.

KG was obviously a big, loud presence in the locker room. Do you still kind of hear that voice in your head sometimes?

Yeah, of course. We bring up stories about him. He was an amazing guy, amazing player. I've never seen anyone like him. For a whole year, how he prepares for the game, every single game the same way, without a smile. It shows how he takes the game seriously. I really respect him a lot.

I know it's not totally in your control, but clearly you respect the hell out of Rondo. How much do you want to be able to grow together as a backcourt and keep this thing going?

I would love it. Just personally I feel like we can be one of the best backcourts in the NBA. We complement each other so well. That's obviously a positive ‘cause a lot of teams, you know, when they see us on the court -- me and Rondo on the court together when we're ready to play -- I don't think a lot of players want to play against us. Hopefully we can stay here together, but only time will tell. It's my last year and I'm a restricted free agent, so we don't really know what'll happen.

How much different do you think this league would be if the general public cared about defense as much as they do about offense?

It'd be a lot harder to score, I'll tell you that. And not only that, it'd be hard to pick who you want to play as a coach. Like, who you want to put on the court. Because defense gets you in the game, especially as a young guy. Maybe a lot more young players would be playing if everybody came with that approach. You never know.

You've always said you don't know where the defensive talent came from, you've just always been like that. You see other young guys and what they worked on, is it just a different attitude?

It's just me, man. It's just my love for the game. I want to do whatever it takes to win. I think that's what it is more than anything. When I see one of my teammates make a good play, to keep that energy going, I feel like that's what I do on the defensive end, and then make a good offensive play. I feel like it raises our level of play when I'm picking up full court after we've just scored a big-time three.

How has your life changed, just your routine, since you became a father?

It's changed a lot, but I adjusted pretty well. Me and my fiancee, it's been a lot, it's been a big change as far as our sleep schedule, but I feel like we do a  great job of helping each other out. And he's just amazing. It's the best feeling in the world. I'm pretty sure if you don't have kids, you hear everybody say that. It's the most amazing feeling in the world seeing somebody that's just like you. 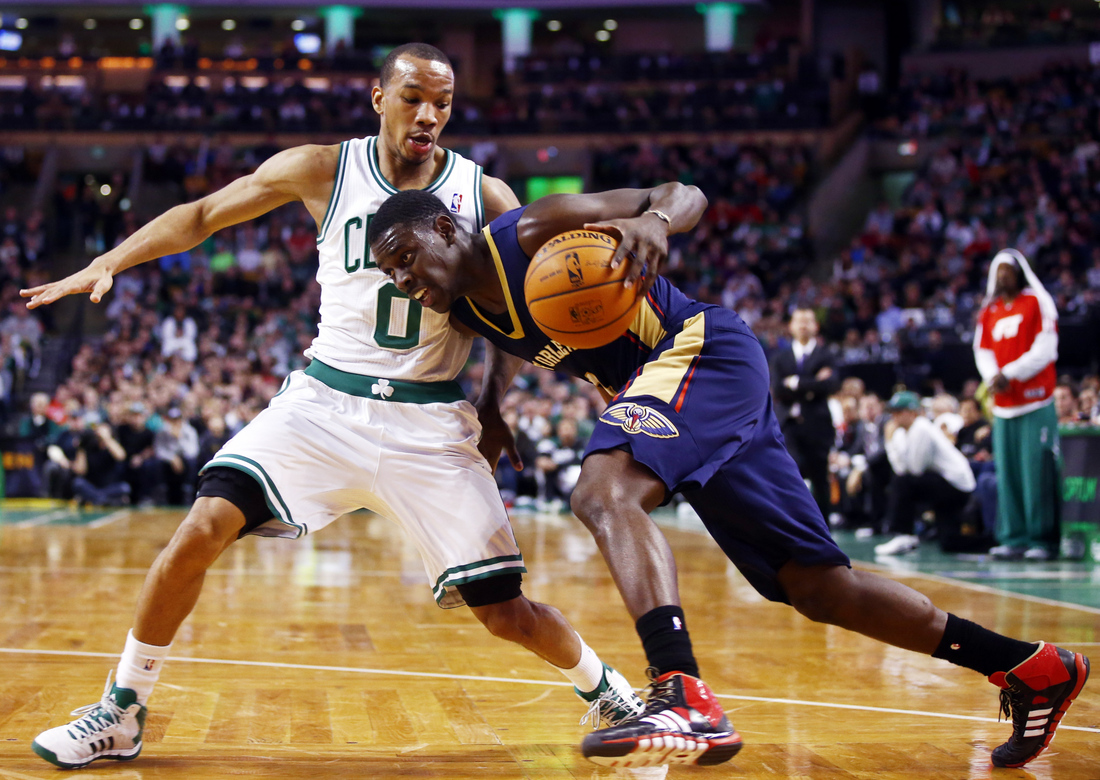 You said you try to look at the positives even though you're not making the playoffs, but I know you said earlier in the year that was your goal. Does it kind of eat at you when you have the realization that it's not happening?

We definitely felt like we had a chance all year. We did. It's disappointing that we're not making it ‘cause playoffs is --  me and Rondo always joke and say we wish we just played a few games and then it was playoffs. Because playoffs is the best feeling in the world, the best atmosphere, it's just amazing. To not be in it this year is disappointing like I said. I probably won't even watch it on TV, to be honest.

No. Unless I have a friend on another team. But we're just that competitive and that disappointed that we're not in it. All we can do is focus on next year.

Should C's be wary of Bradley's injury history?

Our Bradley feature from 2013.

I've heard guys saying they force themselves to watch even though they don't want to.

I know you're still focused on finishing the season, but is it kind of exciting to look forward and say, "This is what I'm gonna work on, this I what I'm gonna come back next year and be better at?"

Yeah, it is. I can't wait till the exit meeting to see what the coach has written for me, and things that he can see that can help me improve my game. Obviously going into the summer, I feel like I'm going to work on everything. But for him to have some notes or something, I think that'll be cool for me because Doc always told me things I needed, but I feel like he'll break it down even more. I'm excited to see what he has to say about me.

How much does he actually communicate with you compared to what you think is going on in his head?

It's the perfect medium between the two. He doesn't give you too much, he doesn't go too little. He gives you the perfect amount.