NBA Sixth Man of the Year Award: Making the case for the top candidates

A number of intriguing story lines surround this year's crop of potential winners. Among them, could Jamal Crawford be in line for the second major award of his career?

Share All sharing options for: NBA Sixth Man of the Year Award: Making the case for the top candidates

The NBA Sixth Man of the Year Award goes annually to the league's best bench star, and in 2013-14 there's plenty of talent to choose from.

If precedent carries any weight with respect to how the panel of sportswriters and broadcasters will decide who walks away with this year's distinction, then teams headed for the postseason need to be strongly considered. In fact, the last four players to win have been on teams with no worse than a No. 3 seed in their conference standings heading into the postseason.

The Oklahoma City Thunder guard has had big shoes to fill in the absence of Russell Westbrook and did so capably, posting averages 16.9 points, 5.2 assists and 1.4 steals per 36 minutes to go along with a 6.9 +/- and an 11 percent player impact estimate (PIE), according to NBA.com.

More importantly, he's helped tread water while Oklahoma City's All-Star point guard was out. Now that Westbrook is back in his starting role, the Thunder can now benefit from Jackson's production off the bench, where he's proven to be a force and the Thunder become more dangerous collectively.

Chicago is playoff-bound and getting its best season out of its homegrown product. Gibson is enjoying his best season to date in Chicago after being drafted by the Bulls in the first round of the 2008 NBA Draft out of USC. This year, he's showing a more complete all-around game, particularly in the post. Gibson is posting strong per-36 minute averages of 16.4 points, 8.4 rebounds and 1.7 blocks.

In addition, he's made a positive impact when he's on the floor with a 0.7 point differential. He's also peaking at the right time and averaging nearly three points more per game, 15.6 vs. 12.9. Without Derrick Rose this season, the Bulls have had to pick up the scoring by a committee of sorts, and Gibson is one of the players who has stepped up.

The exciting upstart Phoenix Suns have had one of the most surprising seasons of any team across the league this season due to inspiring play, both from an an individual and team standpoint. Goran Dragic may come to mind as the most-improved player, but third-year forward Markieff Morris has been an impact player off the bench.

He's putting up 18.5 points and 8.0 rebounds per 36 minutes for Phoenix, who is 35-25 through March 4. What's been remarkable is how well he's stretched the floor and made defenders honor his diverse skill set: 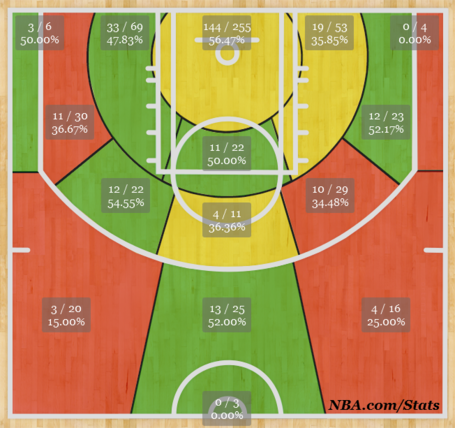 All three primary scoring levels contain green areas, showing that he can threaten his opponents from virtually anywhere. His ability to produce from several spots on the floor is a major asset off the bench. In addition, he's shooting 47 percent from the field.

The middle of the road

The Clippers sharpshooter could be considered among the favorites to win, but as a previous winner with the Atlanta Hawks, the voters are likely to look toward a newcomer first.

San Antonio's starting lineup is back together for the first time in more than two months.

Houston's dynamic duo is coming together

It took time for the Rockets to get comfortable with their inside-out identity, but the duo of James Harden and Dwight Howard have them ready to blast off.

That's the only reason Crawford may be overlooked, because his play has helped the Clippers build upon their record-setting season in 2012-13. As a reserve this season, Crawford has averaged 17.9 points and 3.2 assists while shooting 44 percent from the field and 85 percent from the free-throw line.

The Clippers are playing well enough to secure a top-half seed in the strong Western Conference, currently sitting in fourth place at 42-20 through March 5. With All-Star point guard Chris Paul missing significant time with various injuries, Crawford has filled in without his team losing stride as they near the finish line.

Though he's recently been thrust into the starting lineup, the former Sacramento Kings swingman has already done plenty of damage as a reserve, playing 49 games and averaging 24.8 minutes per contest in that role.

The best part of all of it for New Orleans Pelicans fans is that he's thriving even more as a starter. In three games, he's averaged 19.4 points and 7.4 rebounds to go along with 5.2 assists per 36 minutes.

The biggest detriment to Evans' case is the Pelicans' status as a bottom-feeder out west. New Orleans is cemented in the trenches and lottery-bound with a 24-37 through March 5. Given the voters' tendency to vote for players on good teams, it's likely he gets passed up for a candidate who's headed for postseason play.

After a bitter ending to his once-promising career as a member of the Washington Wizards, the Brooklyn Nets big man is experiencing a Big Apple renaissance. Unfortunately, it's come as the Nets have fallen below expectations as a middling playoff contender after team ownership broke the bank to assemble a squad to compete with the Eastern Conference's elite.

But Blatche is one of the bright spots after being cast off in the nation's capital. He's flirting with career bests in terms of production per 36-minutes -- 19.3 points and 9.3 rebounds while shooting 47 percent from the field.

For a player who's been through a series of adverse circumstances such as being shot as a rookie to being booed in his own building relentlessly, a Sixth Man of the Year Award would mean a great deal.

The second-year big man out of the University of North Carolina has nearly doubled his production from his rookie campaign with 11.2 points per game to go along with 7.7 rebounds in 27.4 minutes.

The giant caveat here is that he's done it all on one of the worst NBA teams in recent memory on a squad vying for the Tank Sweepstakes. If he weren't on a disaster of a team, he'd be in consideration. Instead, he's the longest of long shots.

But stranger things have happened, and it would make for a wild story.