Paul George and the Pacers' offense comes back down to earth

After a stellar start to the season, Paul George and the Indiana Pacers' offense are struggling.

Share All sharing options for: Paul George and the Pacers' offense comes back down to earth

Look at the Indiana Pacers games in the 2014 calendar year, and you'll notice a trend. Both bad teams and good can beat Indiana, as long as they have a decent offense. It's especially possible when opponents score 95 or more points on the Pacers.

Frank Vogel's defense doesn't slip often, but when it does, the offense hasn't been there to save the day. After falling to the Bobcats by 22 points on Wednesday night, Indiana has now lost to Toronto, Atlanta, Denver, Orlando, Dallas, Golden State and Phoenix (twice) since the calendar flipped to 2014. None of those, outside of the Warriors, are great defensive teams.

Indiana's offense ranked 12th in the league at 103.3 points per 100 possessions in the 2013 portion of the 2013-14 season. But since the new year, the offense has fallen to 25th at 102.2 points per 100 possessions, per NBA.com. Though those numbers alone are not a significant drop-off, it's more concerning when the majority of the other NBA teams have only gotten more comfortable and thus more efficient on the offensive end as the season winds along.

At the forefront of the offense is of course Paul George, who told SB Nation's Paul Flannery that one goal this offseason was to improve his mid-range attack. Through the opening month of November, that looked to be accomplished and in a big way. George started the season off white-hot, hitting 51.1 percent of his midrange shots as of December 1. By the end of the 2013 calendar year, he was still going strong, nailing 45 percent of his total midrange attempts. Here's a look at a more specific shot-chart from the Pacers' first game through December 31. 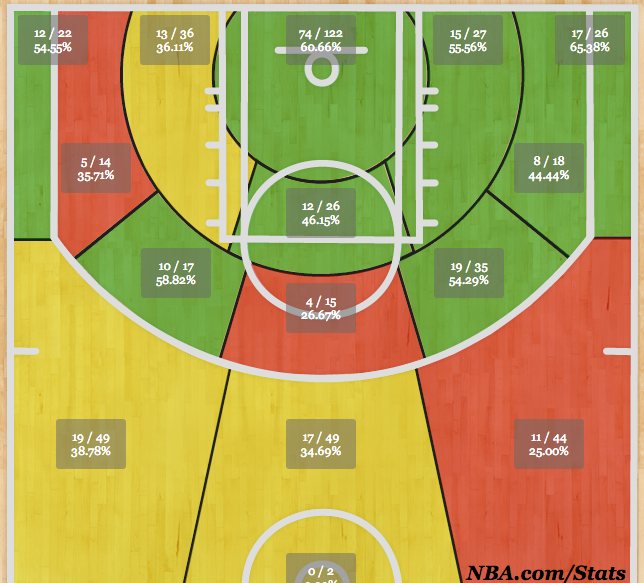 But in the 2014 calendar year, George is only shooting 36.3 percent from mid-range. The shot chart in January, February and March looks a lot uglier, and it's not just the mid-range game that's suffering. George is also shooting 10 percent worse from five feet and in. 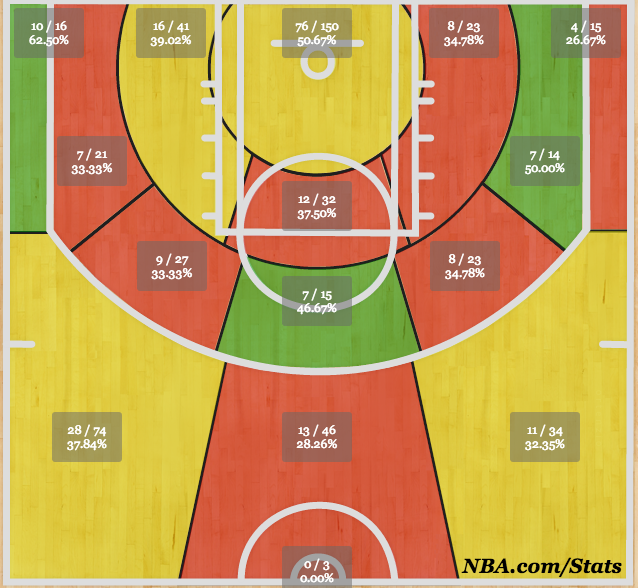 According to Synergy Sports Technology, George finishes most plays as a pick-and-roll ball-handler with 21.2 percent. While he's an adept passer, George is a poor shooter in those situations, hitting 37 percent of his shots as the pick-and-roll ball-handler and scoring just 0.77 points per possession. George shoots six percent better off screens and a whole nine percent better on spot-up attempts. More shockingly, he's even more accurate as an isolation player, hitting 39 percent of those shots.

For the year, George stacks up just fine when comparing efficiency to other notable ball-dominating players at the two-guard or small forward spots.

There's a problem though. The forward's effective field goal percentage -- which accounts for three-pointers being worth more -- has plummeted from 54.6 before to 46.6 percent after the New Year. And it hasn't helped that all season long 28.7 percent of George's shot attempts have come on above-the-break three-point shots. He's hitting just about a third of those attempts.

So is George's offense the reason for a slight regression in Indiana as a whole? It's a huge part of it, that's for sure. Indiana's bench, as well as Roy Hibbert's own offensive struggles, matter too. But for all the talk of George's offensive improvement, he's shooting just 0.4 percent better than his career average of 43.3 percent

Perhaps George needs to be used a little less frequently to get the most out of him.