The Miami Heat enter the NBA playoffs as the favorites after back-to-back championships, but the health of Dwyane Wade and the production of key role players will be a question as the team pushes for a third straight title.

Heat at a glance

It's tempting to view the Heat as a prism through which to gauge LeBron James' historical greatness as he goes for his third championship before turning 30 years old. James remains the game's best player.

But the supporting cast surrounding him at the start of the 2014 playoffs has been less steady than usual since he arrived in Miami. This will be the first time since James' arrival that Miami enters the postseason without a top 10 defense. The aggressive, trapping style the Heat play has suffered with Dwyane Wade in and out of the lineup all season. The team was wise to give the 32-year-old plenty of rest ahead of the playoffs, and Wade has still been one of the most productive guards in the league when he's on the court, finishing second among all off guards in PER.

The Heat better hope he's healthy, because they'll need vintage Wade to help prop up a roster that doesn't look as intimidating as it normally does. Both Ray Allen and Shane Battier have finally started to slip a bit on the wings. Mike Miller is in Memphis now. Greg Oden has yet to prove he can stay healthy enough to stop the bleeding in the middle. The Heat have to be the favorites to win the title again as the back-to-back champs, but there's reason to believe this team isn't as good the ones that went all the way in 2012 and 2013.

What the Heat do have is the best player in the world in his prime of his career. Are you really going to pick against him?

Don't forget to enjoy the ride 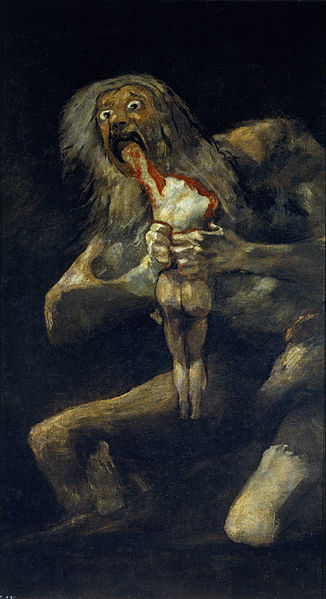 Sure, the Heat haven't been as dominant this regular season as last year, but I still wouldn't doubt their ability to feast on opponents like the image above. We could dissect this painting six ways to Sunday in regards to the mythology, but focusing on the clear graphic nature of the painting reminds me of what Miami could do to the Eastern Conference.

Or maybe it's just a portrait of how Miami's anger at Mario Chalmers finally boils over.

Dwyane Wade didn't limp around this season. When he was hurt, he sat out. When he played, he looked like D-Wade in his prime. Nobody knows whether the Heat's shooting guard will be able to string together games during a playoff run, and there's no telling if he'll be less battered by being held out of a good chunk of games during the regular season.

Whatever the case, Miami needs him. Shane Battier and Ray Allen are also showing signs of age in down years, and the other pieces -- Toney Douglas, Michael Beasley and Greg Oden -- have enough question marks of their own. The Big Three needs to be the Big Three, and while LeBron James and Chris Bosh continue to thrive, all eyes are on Wade to contribute as Miami predictably marches onward. If he can provide the flashes of his old self deep into May and June, Erik Spoelstra's team will be in good shape.

Miami has the league's best offense heading into the playoffs, but the defense has left something to be desired. Once a top-5 team on both ends, the Heat defense now hovers around No. 10 in the league. Defensive rebounding is the culprit -- blame smallball -- though Miami's shooting defense is also surprisingly mediocre. But the Heat balance that by fouling infrequently and forcing more turnovers than any other team in the league.

On offense, the Heat give up a few too many turnovers and don't hit the offensive boards much, but one of the top free throw rates and the league's very best shooting numbers make up for that. Given that the Bulls and Pacers potentially loom in later rounds, Miami's elite offense will face quite the test.

Our resident coach's scouting report on how to stop the Heat.

This set has been in Miami's playbook ever since they committed to a five-out style midway through the 2012 playoffs. It begins with a guard pitching it way ahead to Chris Bosh on one elbow. As the rest of the team trots up the court, Bosh throws it back to LeBron James (or, sometimes, Dwyane Wade) to execute a pick and roll. Meanwhile, as this happens, Shane Battier sneaks from the opposite corner to a position directly behind James.

The defense now has three threats that must be covered: James driving, Bosh rolling and Battier sneaking back. Because Miami gets into this set so quickly, the defenders responsible for the two Heat perimeter players not involved in the play aren't in great position to help. It's on James to make the right decision between driving to score, finding Bosh on the roll or finding his shooters. Nobody does it better.

ROOT FOR THE HEAT BECAUSE...

If you don't "root" for the Miami Heat already, you probably actively hate them. Perhaps you still have issues about how the team was assembled almost four years ago. Or, you're a level-headed fan of the game that can appreciate how the defending champions have managed to figure out a way to win it all the past two years. Combine that with all the criticism that comes their way when they struggle, there's an inherent "us vs. the world" mentality that comes with being both a Heat player and a Heat fan.

Yes, they've struggled with up-and-down play lately, but we all know the Heat will be focused and energized once the playoffs start up. There are burning questions for an intriguing team that always entertains, whether you're rooting for them or hoping they fail. One thing is for sure: you won't want to take your eyes off them when they do play, because there's bound to be plenty of drama no matter what.

Worst Case: After a brutal loss in the conference finals to the revitalized Pacers, LeBron, Wade and Chris Bosh all opt out of their contracts, leaving the Heat with Norris Cole and Justin Hamilton on the roster. Ray Allen and James Jones follow Battier out the door and the media light a candle for Udonis Haslem.