The Raptors looked like they were headed for the lottery until an early season trade turned around the entire season. Now Toronto is looking to prove its young team is no fluke.

Raptors at a glance

Were it not for two key moments in December, the Toronto Raptors wouldn't be here.

The first was a trade that was completed. With the Raptors struggling at 6-12, new general manager Masai Ujiri, antsy to dismantle Bryan Colangelo's mediocre roster, sent the underperforming Rudy Gay to the Sacramento Kings. Ujiri was fine accepting four bit players -- Greivis Vasquez, Patrick Patterson, John Salmons and Chuck Hayes -- just to get Gay off his roster.

The other was a deal that wasn't completed. After trading Gay, Ujiri was prepared to deal point guard Kyle Lowry to the desperate New York Knicks for a package that included a 2018 first-round pick. That almost certainly would have crushed any hopes of Toronto being a competitive club. But Knicks owner James Dolan got cold feet and Lowry stayed.

Since then, the Raptors have been world beaters. They finished 43-19 after that 6-12 start, surging into their first playoff berth since 2008. Lowry had a career year as the team's pulse, youngsters DeMar DeRozan, Terrence Ross and Jonas Valanciunas took major steps forward and the forgotten Sacramento crew turned into one of the best benches in the league. The Raptors are balanced and cerebral, qualities that reflect the leadership of Lowry and the always-underrated Amir Johnson.

If the Raptors can overcome their collective playoff inexperience, they will be a threat to advance deep into May. Not bad for a team Ujiri was planning to blow up back in December.

Bring on the Nets

Since December's trade, the fun-loving Toronto Raptors have given basketball fans in Toronto the warm fuzzies. The Raptors have also given League Pass devotees a compelling reason to tune in regularly for the first time in years. Before the season, it seemed infinitely more likely they'd contend for a No. 1 draft pick than a No. 3 seed, but here we are, and the players can't stop talking about how well they all get along on and off the court.

After an early-March win, DeMar DeRozan was asked about the play of Kyle Lowry. "Whatever I say about Kyle is an understatement," DeRozan said, and an "Aww!" came from Lowry's neighboring locker. DeRozan had just scored 30-plus points for the third straight game, and the swingman said his point guard was the reason why. Asked about DeRozan moments later, Lowry said, "He's an All-Star. Like he said, anything I say about him, vice versa, is an understatement."

Such a happy dinosaur family. 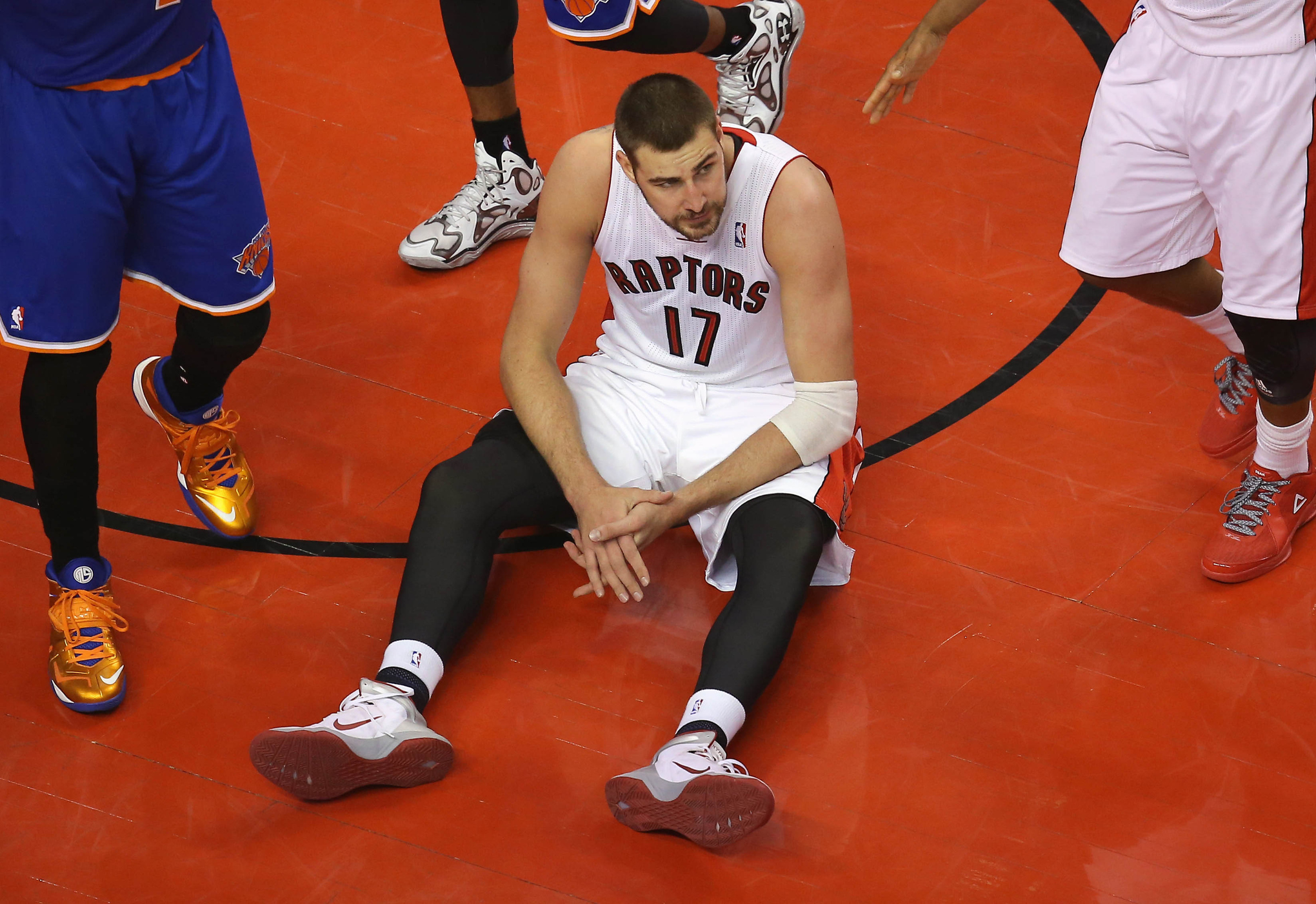 He's not even 22 years old as the playoffs begin, but Raptors center Jonas Valanciunas might be the key in their quest to make noise in the Eastern Conference playoffs. Valanciunas, after all, was one beacon of hope following the team's trade of Rudy Gay, and while Kyle Lowry and DeMar DeRozan have developed into stars for a surprising playoff team, the young big man has continued showing signs of greatness, albeit muddled within some struggles.

As the playoffs neared, Valanciunas strung together solid rebounding efforts to go with consistent double-digit scoring. But his value is most important on the defensive end, where he will be relied upon to match up with big men from Wizards center Marcin Gortat to Bulls All-Star Joakim Noah. If he can clog the middle, help Amir Johnson on the glass and occasionally make teams suck into the paint when he gets a post touch, the Raptors could make it tough on their veteran-laden opponents.

The Raptors are one of the more balanced teams in the NBA, ranking in the top 10 in both offense and defense. With the ball, Toronto does the peripheral stuff really well, with a low turnover rate, solid offensive rebounding and a respectable free throw rate. The team's shooting percentages, however, are pedestrian. With some tough defenses in the East bracket, scoring might become a bit difficult.

Toronto's shooting defense is top-10, though, and its turnover creation and defensive rebounding rates are solid. Where the Raptors defense gets into some trouble is by fouling too much -- Toronto ranks near the bottom of the league in foul rate. It's worth noting that the East's top two teams are darn good at drawing fouls, too.

Our resident coach's scouting report on how to stop the Raptors.

The Raptors have two tall wings that are not especially good ball-handlers, but can shoot over the top of anyone. Thus, a significant number of Toronto's offensive sets involve baseline screening and other Floppy action for either DeMar DeRozan or Terrence Ross. (Floppy, for those who don't know, is when a shooter starts on the baseline without the ball and has the option of using a double screen one way or a single screen the other).

My favorite of these sets is one that's primarily run for Ross. The Raptors use a ton of misdirection to make you think they want to get DeRozan (or another guard) coming off a pick and roll to the middle. Meanwhile, they've snuck their two big men to the baseline for Ross to use on a staggered double screen coming back the other way. Ross is very good at setting up his man before making his move, and thus he's able to free himself from any defender.

ROOT FOR THE RAPTORS BECAUSE...

You want to immerse yourself in the best feel-good story outside of Arizona. Wrecked by selfish iso-ball and heading nowhere for the umpteenth season, a trade is made and the best Raptors team in franchise history emerges. This is a team led by the best two-way guard in the East (no, not Joe Johnson), and one that features three young, exciting starters drafted by the organization (Thanks, Bryan Colangelo). The sleeping giant north of the border has awoken.

Best Case: Kyle Lowry pulls a Rondo and carries the Raptors to the seventh game in the second round as the rest of the world falls in love with these adorable scamps. The Raptors have been playing with house money all season, so anything short of a first- or second-round sweep would be pretty good.

Worst Case: That said, a first round playoff loss would be kind of a buzzkill. Seriously, though, how can you not love these guys?